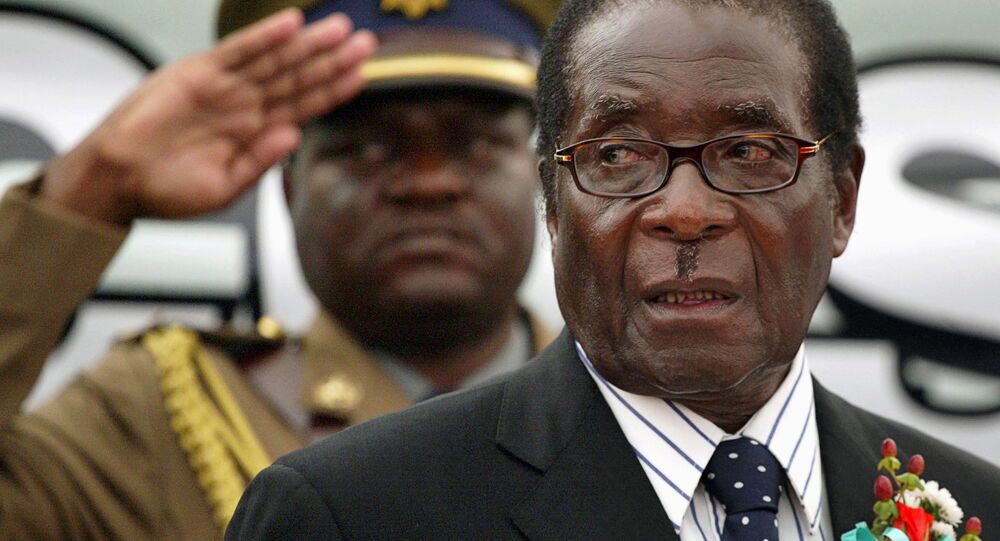 China has been strengthening economic ties many African countries. Beijing could be pleased to see President Robert Mugabe removed from power, experts said to Sputnik.

MOSCOW (Sputnik), Tommy Yang — Mugabe, a 93-year-old revolutionary who held power in Zimbabwe since the nation’s independence was recognized in 1980, was put under house arrest by the Zimbabwe Defense Forces in the capital city of Harare last week in what is viewed as a coup attempt to overthrow the authoritarian ruler, whose rein is often criticized by various watchdogs for violation of human rights and repression against Zimbabwean people.

The latest efforts by the Zimbabwean military to remove Mugabe came after he sacked Emmerson Mnangagwa, the first vice president of Zimbabwe, who was thought to become Mugabe's successor and enjoyed the support of the country's army, in early November. After Mnangagwa's dismissal, Mugabe's 52-year-old wife Grace was projected to succeed her husband as leader of Zimbabwe.

© AP Photo / Ben Curtis
As Mugabe Resigns, 'Anxious Excitement' Dawns in Zimbabwe
As Mugabe continues to try to delay the power transition process in the southern African nation by refusing to resign from the ruling Zimbabwean African National Union – Patriotic Front (ZANU-PF) party, Mnangagwa, the fired former vice president who fled the country after the political crisis erupted, is widely expected to return to Zimbabwe soon and assume power thanks to backing from the military.

As the political turmoil unfolds in Zimbabwe, a recent visit to China by Constantine Chiwenga, commander of the Zimbabwe Defense Forces, one week before the coup attempt took place was called into question, as many suspected Beijing played a role in the removal of Mugabe.

"The commander of the [Zimbabwean] defense forces did in fact pay a visit to China the week before the military intervention took place. There has been a lot of speculation and newspaper reports suggested that [Constantine] Chiwenga went to discuss his plans for military intervention with the Chinese to get their support," Derek Matyszak, a Harare-based senior researcher at the Institute for Security Studies, told Sputnik.

The Zimbabwean expert acknowledged that China denied such accusations, but argued that Beijing has become wary of Mugabe’s rule for quite a while.

"The Chinese have reacted quite angrily to that. They say they have nothing to do with it and they don’t interfere with other countries’ [domestic] affairs. But there are few takers for the Chinese position on that I’m afraid. The Chinese have been known to be supportive of Mnangagwa taking over. When Mugabe went on a visit to China last year to try and seek some sort of economic help, we were told that the Chinese had said they would not provide any assistance and investments would be severely curtailed until we sort out the succession issue, because they don’t see any political and, therefore, economic stability in Zimbabwe until Mugabe leaves office. And they were encouraging Mugabe to put Mnangagwa in as the successor," Matyszak said.

Responding to a question about the nature of the Zimbabwean military commander’s visit to Beijing one week before the coup attempt, Chinese Foreign Ministry Spokesperson Geng Shuang called the visit "a normal military exchange mutually agreed upon by China and Zimbabwe" and expressed hope that "Zimbabwe could properly handle its internal affairs."

© East News / AP
Zimbabwe's President Mugabe Has Resigned - Parliament Speaker
Chinese embassy in South Africa released a statement on Monday, rebuffing allegations that China was notified of the military coup ahead of time.

"This narrative is total nonsense and tries to make something out of nothing. The only purpose of those who try to link China to the political crisis in Zimbabwe is to try to damage China’s image and drive a wedge between China and Africa. Such reports are lack of logic and self-contradictory. Their sinister intentions are very clear," the statement said.

However, South African intelligence sources said Chinese authorities were "keen on knowing who would take over" and were "thrilled to learn" it was Mnangagwa, who is considered "an old friend of China," the Johannesburg-based City Press reported.

As a former freedom-fighter, Mnangagwa received ideological and military training in Beijing and Nanjing in the 1960s.

China was among the first group of countries to establish diplomatic relations with Zimbabwe after the nation’s independence in 1980. China has continued to provide financial assistance to Zimbabwe over the years, as part of its efforts to win support from the so-called "brothers in the third world countries" in Africa. Explosive economic growth in China in recent decades brought more Chinese companies to invest in African countries like Zimbabwe, taking advantage of the rich natural resources to support the nation’s rapid expanding economy.

During his appearance at the Johannesburg Summit of the Forum on China-Africa Cooperation in December 2015, Chinese President Xi Jinping pledged to offer $4 billion to Zimbabwe during the three-year period of 2016-2018 in the form of foreign direct investment.

"One of the major Chinese investments in Zimbabwe has been through diamond mining, exploiting the diamond find of 2006 in the eastern part of the country. Last year, the government decided that they would not renew the mining licenses of the major Chinese companies and they required all the mining companies to merge into one mining company to form a joint venture with the Zimbabwean government. This resulted in financial losses for the Chinese companies. This really annoyed the Chinese. The Chinese government tried to intervene. There were court actions brought by the Chinese companies that did not get their licenses renewed. This caused considerable friction between Zimbabwe and China, even though nothing was said publicly about the issue and they continued to express solidarity between each other," he said.

"Mnangagwa has enjoyed a very good relationship with China. When Mnangagwa made a visit to China two years ago, when he appeared on Chinese TV, he made quite a famous statement about how you make right conditions if you want investments in the country. That set up a pragmatic economic approach that would have been approved by the Chinese, because Mugabe’s policies from an economic perspective has been entirely irrational and have caused the deep economic malaise that we find ourselves in at the moment," he said.

In an interview with state-run China Central Television during a visit to Beijing in 2015, Mnangagwa said that the investment can only go where it gets a return and stressed "we must make sure we create an environment where investors are happy to put their money because they will have a return."

The expert added that he believes Chinese leaders are rather pleased with the development of the situation in Zimbabwe.

"Certainly, it seems that Mnangagwa was the horse that the Chinese was backing. And I’m sure they’ll be quite pleased with the development that has taken place over the last week or so," he said.

However, political analysts based in Taiwan argued that China would not risk damaging its reputation among other African nations by playing any role in the political crisis in Zimbabwe.

"Personally, I think Mugabe’s removal has nothing to do with China, because he has an established reputation in Africa as the founding father of Zimbabwe. China has stressed on not interfering with other nations’ domestic affairs. If there is evidence to prove that China supported the military coup, it would hurt China’s political position in the third world, especially in Africa," Yen Chenshen, a researcher at the Institute of International relations, National Chengchi University in Taiwan, told Sputnik.

Yen argued that China’s economic strength is enough to sway any African politicians who had negative views of Beijing in its favor.

"Take Zimbabwe’s neighbor Zambia as an example. A few years ago, the newly elected president accused China of being the new colonist during his presidential campaign. But after he took office as president, China put in some work on him and was able to keep its business interests in Zambia intact. The assistance and investments in infrastructure projects they need can only be provided by China. Beijing may need to make some financial sacrifices on such projects. But at least, they would win a good reputation among African nations," he said.

"The Chinese has engaged in massive infrastructure projects, such as power generation projects. They’re probably the only people who would have come in to do it on the terms being offered by the Zimbabwean government, which does not have a good reputation of paying for what it bought," he said.

The expert added that some of the friction between the two nations is "precisely" because Zimbabwe has not honored its debt to China.