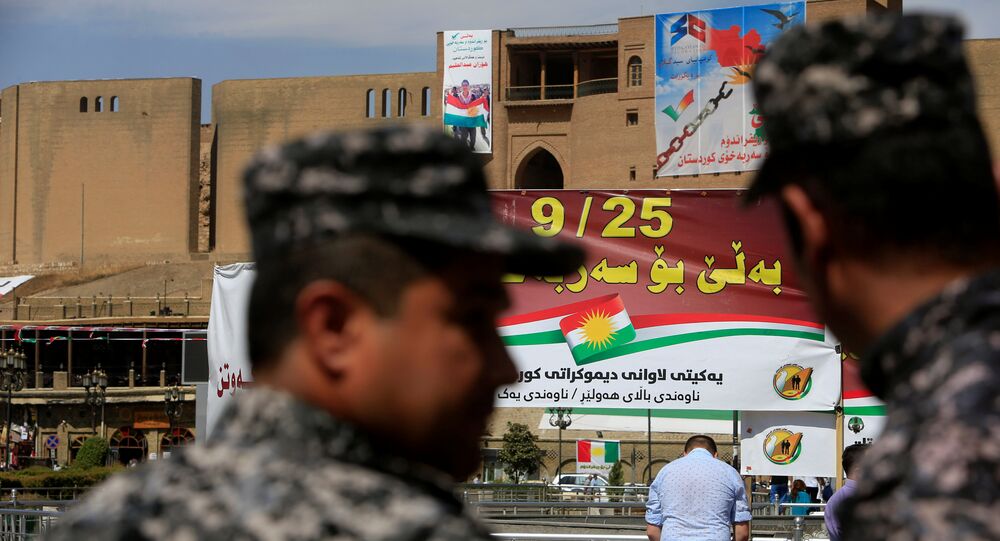 Residents of Iraqi Kurdistan are voting in an independence referendum on Monday. Speaking to Sputnik Iran, Sabbah Zanganeh, former Iranian Ambassador to the Organization of Islamic Cooperation, signaled his country's readiness to support Baghdad's push for a united Iraq.

Zanganeh, who is also an advisor to the Iranian Foreign Minister, pointed to "very warm and sincere relations" between the people of Iraqi Kurdistan and Iran, which he said have "a common history, culture and the way of life."

"Therefore, any attempt that implies the violation of the security, and threat to the lives, of these people cannot but alarm us. But on the other hand, it is necessary to consider Tehran's strong, friendly ties with the Iraqi government. Naturally, Iran stands for a united Iraq and supports the federal authorities of the country," Zanganeh said, citing Tehran's security concerns.

© Sputnik / Sputnik, Dmitry Vinogradov
Why Iraqi Kurdistan Has Little Chance of Becoming Independent
He recalled that residents of Iraqi Kurdistan do not have direct access to the sea, which is why they will undoubtedly have a tough time if their immediate neighbors Syria, Turkey and Iran close all border crossings and land borders.

Commenting on Tehran's determination to close its border with Iraqi Kurdistan if it declares independence, Zanganeh said that "these radical measures" were preceded by Tehran's "active negotiations with the authorities of Erbil and Baghdad."

"Tehran urged them to conduct a peaceful and friendly diplomatic dialogue in order to legally resolve Iraq's internal problems," he added.
Zanganeh described the independence referendum as "in fact Iraqi Kurdistan's separatist secession from a sovereign state."

"In this vein, [President of Iraqi Kurdistan] Masoud Barzani's attempts aimed at destabilizing the region will force Iran to act on the principle of parity. Apart from closing its borders, Iran may reconsider a huge number of bilateral contracts related to the military, energy and economic sectors, something that will deal a huge blow to the economy," Zanganeh pointed out.

He urged Barzani "to take into account the interests of not only Kurds, but also those people who live side by side with them, such as Muslim Shiites, Sunnis, Arabs and Christians."

"With the situation continuing to escalate, the probability of a military confrontation is growing. Given that Barzani's push for an independent Iraqi Kurdistan poses a threat to the future of both the Kurdish population and other tribes and nationalities, this is already a threat that must be neutralized," Zanganeh concluded.

Governor of Kirkuk Dr Najmaddin Karim votes at Almas neighborhood in Kirkuk and calls on Kurds to vote yes at #Kurdistanreferendum pic.twitter.com/G8UlXnTThO

In June, the President of Iraqi Kurdistan set September 25 as the date for the referendum on the region's independence from Iraq.

© REUTERS / Azad Lashkari
Will the World Follow Israel in Recognizing Iraqi Kurdistan's Independence?
The decision prompted harsh criticism from a number of states, including Iran, Iraq, Turkey and the United States, which claimed that Iraqi Kurdistan's independence referendum posed a threat to stability in the region, and stressed the importance of Iraq's territorial integrity.