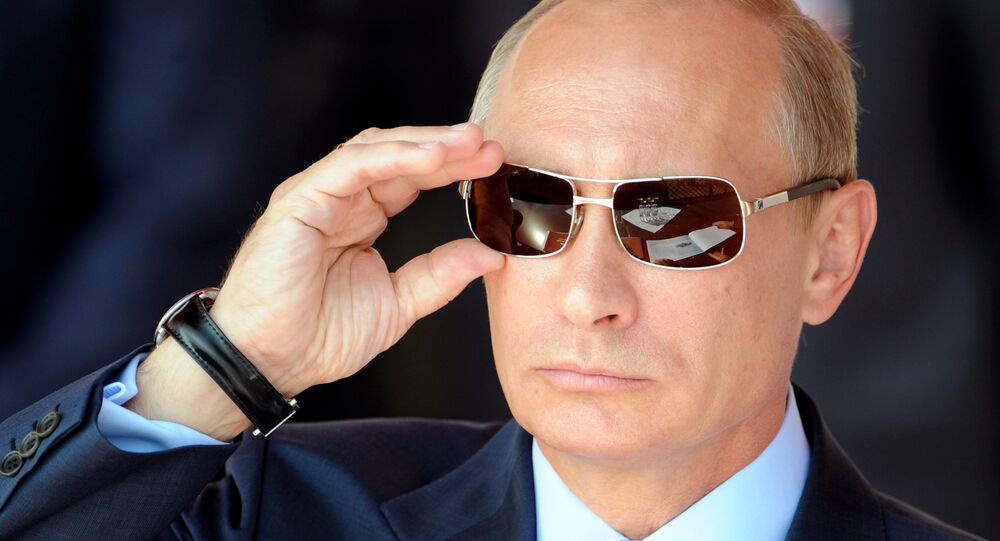 Seeking to demonize Russian President Vladimir Putin, the Western media has apparently ended up inadvertently imbuing his image with almost godlike properties, effectively transforming the persona of a capable head of state into some kind of mythical omnipotent figure.

Earlier in August Netflix released a film called Icarus – a ‘documentary’ about what Western media has called the ‘Russian doping scandal’ featuring the revelations of WADA informant Grigory Rodchenkov.

Despite being praised by Western critics and review aggregators like Rotten Tomatoes, the movie could hardly be considered a masterpiece.

© CC0
Putin Says People Behind 'Death Groups' No Different From Murderers
But as Russian journalist and political commentator Viktor Marakhovsky wrote in an op-ed for RIA Novosti, the filmmakers worked a masterstroke, transforming the movie into an epic saga made in the finest traditions of Ronald Reagan’s PR battle against the ‘Evil Empire’ by introducing a “fairy tale character from dreadful Russia who’s being hunted by Putin himself.”

The Russian defector featured in the movie basically reveals the "whole universe of boundless Russian terror and limitless Russian lies that threaten the world"; and this universe is condensed into the figure of a single man – Vladimir Putin.

"For the past several decades the Western mass culture has never produced a villainous character equal to ‘Russia’s Putin.’ A puny Osama could only send suicide bombers to blow up things. The local Assad (previously known as Saddam or Gaddafi or Fidel) could only “kill his own people” or “make weapons of mass destruction”. Even the Korean Kims, who inherit their image made by Western mass culture like a crown, could only wave a nuclear missile around," Marakhovsky wrote.

Unlike all these characters, Putin (or rather the image of him conjured by Western media) is omnipotent and omnipresent, moving unseen and appearing without warning, performing a variety of evil deeds and vanishing without a trace.

Putin reigns over the empire of bio-robots pumped full of the mysterious but horrific super drug called meldonium.

Putin uses missiles to shoot down aircraft, including those carrying heads of state; there’s no proof, of course, but everyone knows it.

Putin unleashes hordes of illegal migrants upon Europe, and is preparing to attack Estonia in 2022.

Putin meddles in the US elections, as well as in the French, German, Dutch and Italian elections.

Putin hacks into computer servers and leaks information to WikiLeaks.

Putin does not forget to trample his neighbors, invading Ukraine without anyone actually seeing it (but everyone knows, of course).

And as it turns out, Putin backs the Venezuelan dictator Maduro (what, you didn’t know about it?)”

However, it is hard to believe that the leader of an apparently isolated, decaying country whose economy was allegedly torn to shreds is capable of performing such feats; it actually leads the audience to believe that this man truly commands some potent villainous powers bordering on supernatural that allow him to overcome these obstacles.

"I believe that the collective Western media class went too far while attempting to vilify Russia and its president," Marakhovsky remarked.

"The mythical figure of Vladimir Putin should’ve retained its human limits. He should’ve been portrayed as the kind of cunning and crafty villain that could still be beaten; a figure inferior to the forces of good. But the image of Putin created by the advanced countries’ propaganda simply outclasses any Western figure in terms of omnipotence and omnipresence, making all available ‘punishments’ that may be implemented against him and his country look like pathetic half-measures. And since the US can’t handle Russia the way it handles lesser evils, it remains unclear what can be done about Russia at all."

According to Marakhovsky, it is humor that may become the best way to deal with these media projections, as the Russian government and its military and diplomatic agencies have more pressing matters to deal with rather than combat phantoms concocted by Western media.

"Time and again good jokes have proven their ability to unravel even the mightiest propaganda empires and their phantoms,” Marakhovsky surmised. “And the best way to defeat all manner of obscurantism and fears is to make their victims laugh at them."