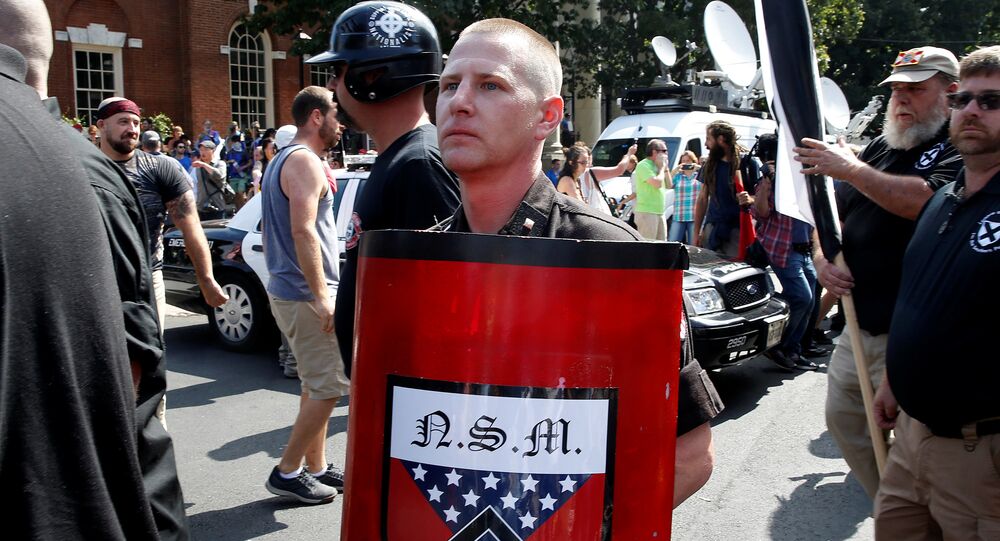 The ugly events that have just taken place in Charlottesville, VA are a stark reminder that the cancer of white supremacy continues to fester in America - and not just at the level of a few hundred knuckle dragging racists marching with Confederate flags.

On the contrary, white supremacy is rooted in the very foundations of America, and remains wedded into the very fabric of its society and culture.

© REUTERS / Alejandro Alvarez/News2Share
White nationalists carry torches on the grounds of the University of Virginia, on the eve of a planned Unite The Right rally in Charlottesville, Virginia, U.S

The mere fact this is still being debated in the United States, the fact there are those who continue to accord a nobility, valor, and romanticism to the Confederacy  -  regarded wistfully as the "Lost Cause" to its adherents  —  this is evidence of the deep polarization that divides a society yet to fully come to terms with its legacy of slavery, racial oppression, and brutality.

Four million human beings  —  men, women, and children  —  were owned as chattel by the start of the US Civil War in 1861. They were bought and sold, raped, beaten, tortured and murdered upon the whim of their owners, whose barbarity has its modern equivalence in the barbarity of the followers and members of the so-called Islamic State (also known as Daesh).

When white racist fanatic, Dylann Roof, slaughtered nine people at the Emanuel African Methodist Episcopal Church in Charleston, South Carolina back in 2015, he unwittingly exposed the truth that the US Civil War remains the defining event in the nation's history, which still today informs a cultural divide between North and South.

When they tell you Dylann Roof was an anomaly, tell them you know different. #Charlottesville pic.twitter.com/40RLSiTitT

The reason for this lies not so much in the legitimacy of the Confederate/southern cause  —  indeed how could a cause defined by the right to keep human beings as slaves ever be considered legitimate  -  but in the weakness of progressive forces in succumbing to the mythology that has been ascribed to the Confederacy and to those who fought and died for it. Indeed, if ever a society was crying out for the aggressive assertion of human rights, racial equality, and justice, it is the United States.

Racial oppression, whether delivered from the gun of a mass murderer in a South Carolinian church, or the gun of a police officer, has yet to be expunged in the land of the free, even though 150 years have passed since the Confederacy was defeated in battle.

There are historical reasons why this is so, but one in particular: namely the decision of the 18th US President, Rutherford B. Hayes, to end Reconstruction as a condition of his entry into the White House with the support of southern Democrats, a tawdry political deal known to history as the Compromise of 1877. It marked the end of a decade in which so-called Radical Republicans (referred to pejoratively as Black Republicans), in control of the US Congress, had driven forward a federal program to promote and uphold the rights of former slaves throughout the South, according them the full civil and political rights that their status as free men and women demanded.

This was absolutely necessary immediately upon war's end, when local politicians assumed control of state legislatures across the South and enacted "black codes" with the objective of keeping newly freed black slaves in as close to a state of their former bondage as was possible, refusing to grant them their civil rights or the vote.

© AP Photo / Steve Helber
A white nationalist demonstrator with a helmet and shield walks into Lee Park in Charlottesville, Va., Saturday, Aug. 12, 2017. Hundreds of people chanted, threw punches, hurled water bottles and unleashed chemical sprays on each other Saturday after violence erupted at a white nationalist rally in Virginia.

The reaction of the North was to divide the former Confederate states into military districts and occupy them with federal troops to ensure the protection of blacks from white racists and to enforce their civil rights. This was accompanied by the demand that those former Confederate states support the passage of the three post-civil war amendments to the US Constituion  —  the 13th, 14th, and 15th  —  outlawing slavery and granting rights of citizenship and the vote to every person born in the United States regardless of race or color in every state.

The end of Reconstruction in 1877, and the withdrawal of federal troops from states such as South Carolina, resulted in the plight of blacks in said states suffering a sharp reverse. The Klu Klux Klan's influence and power as America's first terrorist organization instantly made its presence felt, measured in the rise and entrenchment of white supremacy as a state, and the culture of segregation returned across the South. Blacks were lynched, murdered, and tortured with impunity from then on, and their status as second-class citizens entrenched.

This mindset remains a fact of life not just across the South, but across the United States, carried in the hearts and minds of right-wing Republicans and an alt-right movement that has worked to normalize the politics of race in recent years, whipping up division and spewing out prejudice and racial stereotypes with blithe disregard for common decency.

By far the most telling evidence of the emergence of white supremacy in recent times was the election of Donald Trump as President of the United States in 2016. Trump's bigoted rhetoric on migrants, Mexicans, Muslims, and minorities gave license to racists and white nationalists and Nazis all over America, lending their creed the kind of legitimacy that would have been unthinkable previously.

Indeed, one of his key advisers, Steve Bannon, credited with steering Trump all the way from political obscurity to the White House, is a national figurehead and icon of the nation's alt-right movement.

It is said that those who sow the wind shall reap the whirlwind. Charlottesville is a reminder of how the past intrudes on the present, and of the folly in romanticizing history instead of learning from it.

Charlottesville: Nazi Violence and Murder - What Was Role of Police?