Andrew Breitbart and Jeremy Corbyn could hardly be two more different men. It is difficult to imagine that the vegetarian, old leftist leader of the UK Labour Party and the deceased American conservative journalist, publisher, and boss of the Breitbart News network would find much to bond over if they were stuck in a lift together.

Upon deeper inspection, however, one area of common ground does exist; they both understand that, to use Breitbart's terminology, "politics is downstream from culture." What this means is that in order to win in politics you need to win control of the popular culture and consciousness. Andrew Breitbart understood this and made it the battle cry for his crusade against the American political and media establishment — the "Democratic-Media complex" in his words. Mr. Corbyn, based on his recent speech at Glastonbury music festival, grasps this concept fully and seems intent on exploiting it.

At #Glastonbury I spoke with thousands of people. Over 4 million have watched my speech online since. We're building a movement #ForTheMany. pic.twitter.com/s10U6yuTO8

Corbyn's rise through British politics has been remarkable. From his starting point as the token gimmick candidate, he stormed the Labour Party leadership election, fought off a leadership challenge, and returned an impressive — albeit not victorious — general election result. Not bad for an original 100-1 outsider.

He has described his party as a "government in waiting," has outstripped Prime Minister Theresa May in recent opinion polling, and has even suggested (along with some bookmakers) that he will be Prime Minister in six months time. His most recent triumph, as mentioned previously, was delivering a barnstorming speech to an enthusiastic Glastonbury crowd. The speech included everything from quotes from the poetry of Shelly to evocative imagery of children expressing themselves artistically, and in delivering it, Jeremy Corbyn sent the clearest signal yet that he intends to take on Mrs. May in the cultural rather than in the strictly political sphere.

If the cultural, rather than the strictly political, is Mr. Corbyn's chosen battleground then he can reasonably expect continued success. The balance of importance has tipped in recent times towards values and visions rather than balance sheets and pragmatism.

© REUTERS / Phil Noble
Jeremy Corbyn, the leader of Britain's opposition Labour Party, poses for selfies at a campaign event in Leeds, May 10, 2017.

The great success of David Cameron and George Osborne's time as the Conservative leadership team was that their emphasis on the practical steps needed to fix the freshly crashed economy (who can forget the memetic impact of "long term economics plan") and their business-like approach was perfect for a time when Brits were crying out for someone to steady the economic ship. The Cameron-Osborne team was also successful in persuading the electorate that Labour could not be trusted with their homes, savings, and businesses. Cameron's Tories were presented as the competent and capable bank managers up against a chaotic circus led by Ed Miliband that obsessed over abstract concepts rather than what people actually cared about — and it worked… then.

Times Have Changed. The failure of the previous Tory strategy (1. A catchphrase centered on prudence 2. Attack the opposition leader 3. Warn about chaotic coalitions 4. Focus on who is going to be PM — Done!) to work again has significantly damaged Mrs. May while Jeremy Corbyn's talk of "For the Many, Not the Few" and his posing of questions about what kind of country the United Kingdom wants to be has chimed with voters, especially the young.

© AFP 2019 / Daniel Leal-Olivas
Corbyn Overtakes May as Voters' Choice for Best Prime Minister, Poll Finds
Everything that Corbyn has done following the 2017 UK general election (which he lost, remember!) from his response to terrorism and the tragic events at Grenfell Tower to his "set" at Glastonbury has been orchestrated to appeal to Brits on a cultural and identity level rather than anything pragmatic or strictly logical. He appears to have become an inadvertent disciple of the Andrew Breitbart doctrine — he has learned that "politics is downstream from culture."

The fact that Labour has found a culture warrior in the form of Jeremy Corbyn at the same time as the axis of importance, politics versus culture, has tilted that way is good news for the Labour Party and very bad news for the Conservatives because, as technocratic and competent as she is, Theresa May has a very hard time engaging people on a cultural or emotional level. Her continued PR howlers, such as not speaking to the crowds at Grenfell and not appearing alongside her new Democratic Unionist Party (DUP) partners, have only served to further reinforce this failing.

The priority for anyone who opposes the kind of left-wing politics and spend-happy economics that Mr. Corbyn and his movement favor is clear. They must fight populist fire with populist fire and for that to happen they need a leader able to take the cultural fight to the Corbynistas.

It gets worse for the Tories as there does not seem to be a legitimate cultural fighter in their midst and those who could, at a stretch, take up the mantle such as Jacob Rees-Mogg or Boris Johnson could prove too polarizing or likely to sink in the Brexit mire to step into that cultural space with any success.

In fact, the candidate most suited to taking up the culture war for the Conservatives and the right in general is Scottish Tory leader Ruth Davidson. However, she is unlikely to move from her position as the Tories captain at Holyrood, especially given that the recent success of the Scottish Tories has been largely centered on her. Who could forget "Ruth Davidson's Conservatives" or "Ruth Davidson's candidate," and #TeamRuth?

Ms. Davidson's appeal and political pop stardom is behind a large part of the recent success of the Scottish Tories which has helped propel the UK Tories into retaining power at Westminster. The stark reality must surely be evident to the Tories? If Ruth moves down south, Holyrood will be lost to them once more. 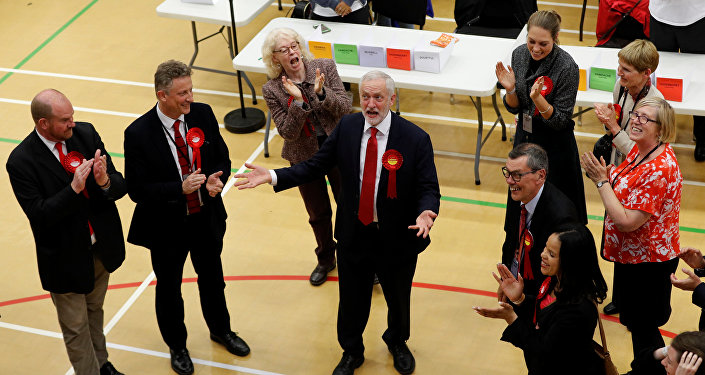 © REUTERS / Darren Staples
UK Labour Party Leader Corbyn Enjoys Massive Turnaround After Election
The right desperately needs a cultural figure who can speak across the electorate in the same way as Corbyn evidently speaks to the left wing to emerge. While who that might be, why they might or might not do it, and what could happen if they do are all legitimate questions and up for debate, the unavoidable truth is, that person is not and cannot be Theresa May.

Theresa May's style, that of the calm technocrat, is very useful when Britain feels like it needs a manager (as it has in the past and surely will again) but, when "culture precedes politics," an emotionally engaging, warm, and culturally relatable leader is essential.

The right needs a 21st century Ronald Reagan or Margaret Thatcher to imbue right-wing politics in Britain with what Tory MEP Daniel Hannan described as a "breath of warmth and optimism" and revive in conservatives the sense that they are fighting for the culture and not just squabbling over the checkbook. What it has at the moment, in Mrs. May, is far more in the style of Ted Heath or Herbert Hoover and she stands lose the cultural fight just as they did.

This dynamic between culture and politics is being replicated across the liberal democratic world. It explains the success of Donald Trump over Hilary Clinton, the rise of Marine Le Pen in France, and also the continued rise of Jeremy Corbyn as well as the sentiment that led to the UK choosing Brexit.

Now that the battle lines in UK politics have been redrawn and Jeremy Corbyn's Labour Party has been the first to set out on maneuvers. Anyone who opposes him, from the most old school classical British liberal to the staunchest conservative, had better hope that the Tory party (for as long as it remains their best election-winning vehicle) can find a replacement that can carry their standard on these new terms.

If they can't, the Tories, and the broader right-wing, look doomed to learn the same lesson that Andrew Breitbart knew, that Jeremy Corbyn seems to now know, and that they still seem oblivious to on a UK level… that "politics is downstream from culture."