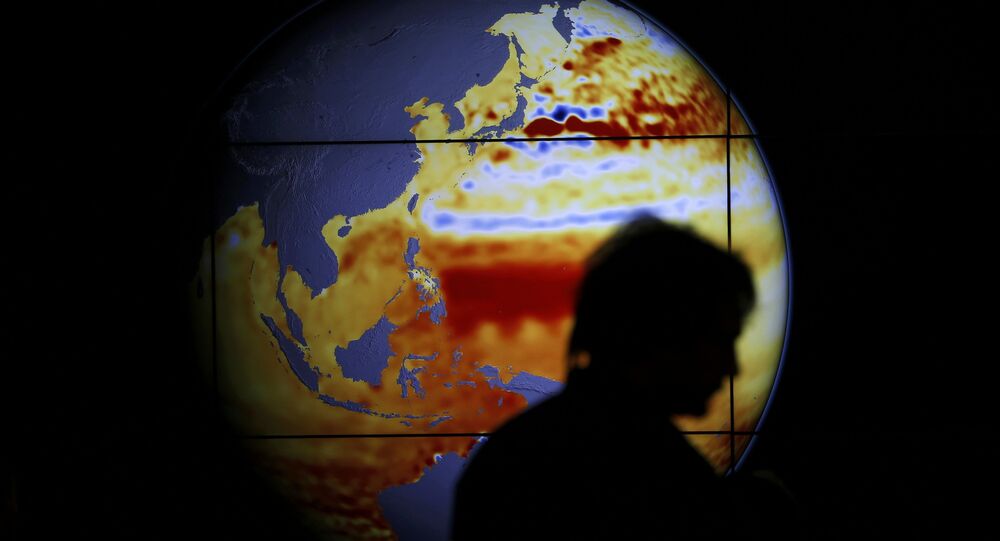 © AP Photo / Pablo Martinez Monsivais
Trump Pullout From Paris Accords Puts US Interests First - Ex-Senate Adviser
MOSCOW (Sputnik) — On Thursday, US President Donald Trump announced his decision to withdraw from the Paris climate agreement. At the same time, the president expressed readiness to renegotiate the deal under terms that would be "fair to the United States."

"In the longer term, the Paris Agreement temperature goals will not be able to be met unless the US re-joins global efforts within the next 5-10 years, so that globally aggregated CO2 emissions can be reduced to zero by around mid-century," Bill Hare, CEO of Climate Analytics, a non-profit climate science and policy institute, told Sputnik.

Hare noted that the US withdrawal would not, however, tangible disrupt the Paris climate deal for now as other countries are still committed and would join their efforts to fulfill the agreement despite the US pullout.

"US withdrawal will not fatally undermine the Paris Agreement but will likely bring other large emitters and many smaller countries together to maintain implementation momentum. We’re already seeing this effect in the announced agreement between EU and China," Hare added.

On Thursday, Chinese Foreign Ministry Spokesperson Hua Chunying stated that China would continue to participate in the Paris climate agreement regardless of other countries’ stance. She underlined China’s willingness for cooperation with the European Union on expanding international coordination on climate change.

In turn, President of the European Commission Jean-Claude Juncker announced that the European Union and China were closely cooperating on implementing the Paris agreement.

Trio told Sputnik that US withdrawal would not have significant consequences because other counties kept their commitment under the agreement.

"The US withdrawal could have two consequences, at international level if other countries would join the US; and at national level as the US contributions to the Paris Agreement would no longer be fulfilled. In both cases the impact will be very limited. Until now no single country has said it would join the US," Trio said.

Trump’s decision is also unlikely to reverse emissions reductions in the United States itself, according to the NGO chief.

© AP Photo / Andrew Harnik
Trump's Decision on Paris Climate Accord Not Reflecting Economic Realities
Trio, however, urged all other participating countries to ensure the fulfillment of their obligations under the Paris agreement to avoid any negative consequences of the US withdrawal.

"All other countries should ensure they continue to implement their promises, both in terms of greenhouse gas emissions reductions as provision of climate finance, and also as promised, should use the 2018 revision process to further increase their action," Trio stated.

In turn, Hare called the reduction of greenhouse gas emissions in all key sectors before 2020 vital for avoiding severe climate damage.

"It is critically important to rapidly reduce GHG (greenhouse gas) emissions in the next decade. If we miss bending the rising emissions curve downward by around 2020, we may well miss the chance to avoid the worst climate damage. All key sectors — energy, transport, buildings, industry, forestry and land use, and commercial agriculture —have to begin major efforts to cut emissions 2020 at the latest," Hare stressed.

Hare added that US emissions, if sustained, could add an additional warming effect of about 0.1-0.2 degrees Celsius (0.18-0.36 degrees Fahrenheit), which would need to be compensated by larger and faster reductions in other countries.

The Paris Agreement on climate change was adopted in December 2015 at the 21st UN Climate Change Conference (COP21) and was signed by 194 countries and ratified by 143. The deal aims to limit global average temperatures to less than 2 degrees Celsius above pre-industrial levels, with parties to the deal agreeing to cut their emissions in accordance with the proposed plan. The agreement took effect November 4, 2016.