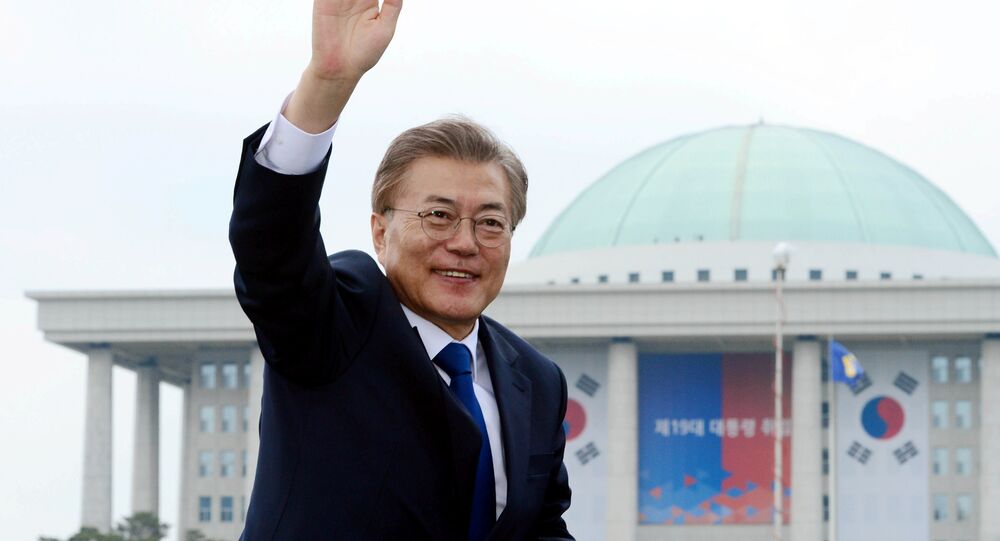 MOSCOW (Sputnik), Tommy Yang — Winning an election in a country deeply split following the impeachment of former president Park Geun-hye over an extensive corruption scandal, Moon Jae-in, a former human rights lawyer, needed only 40 percent of votes to defeat other conservative candidates in the election on Tuesday.

Being a liberal candidate from the Democratic Party, which has always preferred the “Sunshine Policy” seeking to promote dialogue with North Korea and improve relations through cultural and economic exchange, Moon had to portray a progressive image in dealing with North Korea during his presidential campaign.

“In South Korea, what defines you as a conservative or progressive candidate comes down to your policy position on foreign policy,” James Kim, an international relations expert at the Asan Institute for Policy Studies in Seoul, told Sputnik. “Moon had to be loyal to the policy line of engagement with North Korea, which is the identity his party represents.”

But analysts said the new South Korean president is likely to be constrained and more pragmatic in office, instead of making a U-turn on current policies towards North Korea.

“Moon will be different from previous progressive leaders who focused on the ideology of the ‘one nation’ identity,” Hyun-Wook Kim, a professor at the Korea National Diplomatic Academy in Seoul, told Sputnik. “He will be more realistic. The conditions for his meeting with Kim Jong-un will be the denuclearization of North Korea.”

Unless North Korea stops the development of its nuclear weapons and starts the process of denuclearization, there’s little room for Moon to lift existing economic sanctions and initiate engagement with its neighbor in the north, including reopening the Kaesong Industrial Complex that the previous administration said was funneling hard currency to the regime in Pyongyang.

“If Moon tries to reopen the industrial park, it will violate the UN resolution on North Korea, which required severing all economic aids that may provide financial support to its nuclear arms programs,” Kim said.

“Over the past 20 years, we have tried all kinds of engagement with North Korea, including the Kaesong Industrial Complex,” Kim, the expert from the Asan Institute for Policy Studies, said. “They have all failed miserably. North Korea continued its progress in becoming a nuclear state. After Pyongyang’s the fourth and fifth nuclear test, South Korea finally moved away from engagement.”

As a direct response to the rapid progress of North Korea’s nuclear arms program, South Korea allowed the United States to deploy a controversial anti-missile defense system, known as THAAD, on its territory. The countries agreed that Seoul would provide land for the system while Washington would pay for its installation and maintenance.

© REUTERS / U.S. Department of Defense, Missile Defense Agency/Handout
North Korea Taunts Seoul With ‘Satellite Photos’ of THAAD
However, in late April US President Donald Trump recently said he would make the South Korean government pay $1 billion for the THAAD system, the demand which was immediately rejected by South Korea. According to a Congressional Research Service report released in Seoul, negotiations over renewing the cost-sharing Special Measures Agreement (SMA) between the two nations are due to begin in 2017.

Cost-sharing issues with Washington, as well as security concerns among local residents in the Seongju area, which have been protesting over concerns that the system’s presence would make them a primary target for a pre-emptive strike from North Korea, became key issues among Moon’s supporters and made him promise to review South Korea’s decision to host the anti-missile system, which became operational on May 1.

Moon criticized the rushed deployment of the THAAD system in an interview with the Washington Post. “It is not desirable for the [interim] South Korean government to deploy THAAD hastily at this politically sensitive time, with the presidential election approaching, and without going through the democratic process, an environmental assessment or a public hearing,” he said.

By deploying the THAAD system quickly and making it operational before a major presidential election in South Korea, Washington has left little room for the new South Korean president to reverse course, analysts said.

“Can Moon ask the US to take it [the THAAD system] out now?” Kim, the expert from the Asan Institute for Policy Studies, made a rhetorical question. “By having the system, it offers South Korea contingencies in case of a military conflict. It may buy you 30 minutes or one hour.”

© REUTERS / Yonhap
S Korean 'Bernie Sanders': Why Moon's Rise to Power Sends Mixed Signals to US
Moon also faces an uphill battle in repairing relations with China, the country’s most important trade partner, as the THAAD system is viewed as a serious security threat by Beijing. Following the system’s deployment in South Korea, China launched a series of economic retaliation measures, including suspending more than half of South Korea's Lotte Mart shops in China over minor violations of fire safety regulations and cancellation of tour groups to South Korea by Chinese travel agencies.

But Moon’s victory in the South Korean election was definitely a favorable result for China, analysts said.

Two days after taking office as president, Moon had his first phone conversation with Chinese president Xi Jinping on Thursday. Moon said his new government was willing to actively communicate with China and sought the best solution to the issue of THAAD, while suggesting dispatching a special envoy to China for further discussion.

“China’s economic influence on the Korea peninsula, on both North Korea and South Korea, has been the strongest since the Opium War in the 19th century,” Sung-Yoon Lee, a Korean studies expert at the Fletcher School of Law and Diplomacy at Tufts University in Boston, told Sputnik. “There’s no anti-Chinese sentiment inside South Korea, despite the economic bullying from China. So the relationship with China can be mended easily.”

South Korea’s exports to China in 2016 accounted for 26 percent of its annual total, the largest among all of its trade partners, according to the United Nations International Trade Statistics Database. Thanks to booming demand from the rapid growing Chinese economy, South Korean exports continued to roar in recent years. Official figures showed that South Korea’s exports in April jumped 24.2 percent from the previous year to $51.01 billion. Its exports to China grew by 12.1 percent and 10.2 percent in March and April, respectively.

But because both China and South Korea play an important role in the global supply chain of consumer electronics, it’s difficult for China to increase its economic sanctions against South Korea without hurting its own economy, analysts said.

“Most of South Korean exports to China are semiconductors and LCD screens that are key components in consumer electronics manufacturing in China,” Kim, the expert from the Asan Institute for Policy Studies, said. “Can China really stop importing those products from South Korea? Do Chinese factories still want to make smartphones and TVs?”

According to data from the Observatory of Economic Complexity, a project at the MIT Media Lab, over 30 percent of South Korean exports to China are semiconductors and LCD screens.