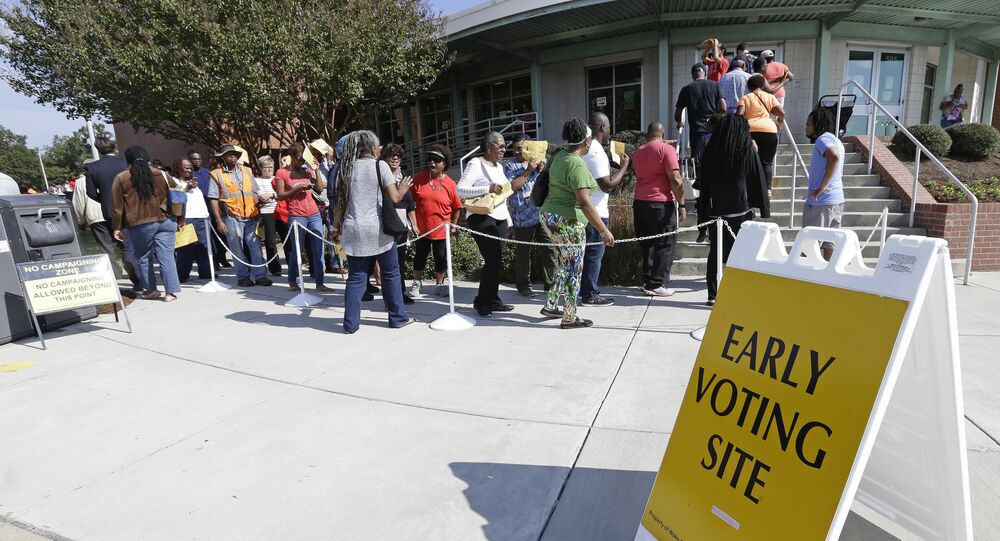 The North Carolina NAACP has filed suit in state court to fight the purging of voter rolls in the lead-up to the US presidential election. Their claims are once again raising serious questions about actions by Republicans that many claim are directly aimed at suppressing the vote among core Democratic voters, specifically African-Americans.

The most notorious of the government programs is known as CrossCheck, which is run by state officials. CrossCheck is a partnership between 28 states that share voter data, and purportedly use it to eliminate those registered in two states. However, the methodology that is used to analyze the seven million names collected by CrossCheck is deeply flawed. The Oregon Secretary of State noted that state abandoned CrossCheck because "the data we received was unreliable."

Investigative journalist Greg Palast, who first exposed the CrossCheck program in an article for Rolling Stone Magazine, estimates that 3.5 million voters could be illegally purged from voting rolls because of this program.

The NAACP lawsuit alleges that a large number of independent voter challenges, which appear to be coordinated by the right-wing Voter Integrity Project, have led to the illegal purging of thousands of voters in majority Black counties.

The way these challenges work is that a piece of mail is sent to the address on file. If the person does not return that piece of mail, this can be taken as evidence that the voter no longer lives there, and if the voter does not attend a hearing on their registration status, they can be struck from the rolls. It goes without saying that if someone has changed addresses, or missed a single letter in their mailbox, they could in fact miss the hearing. State officials say people usually do not attend the hearings in any case.

People are discovering that they’ve been purged from the voter rolls in a few ways. One woman, who was 100 years old and only leaves her home once a month to check her PO box, learned when she saw an announcement for the hearings in the local newspaper. Others are finding out they’ve been purged when they show up to vote early.

Four-and-a-half thousand people have had their voter registration challenged in three counties in North Carolina: Beaufort, Cumberland, and Monroe. We only have detailed information from Beaufort County, where all challenges that were filed in Belhaven were from Black voters, who make up 53% of the registered electorate; it seems fairly clear what these challenges are designed to do.

Those behind the challenges say what they’re doing is legal under state law, and while the NAACP does not dispute that, it says the challenges are illegal under Federal law — specifically, the National Voter Registration Act. They are asking all purged voters — and we don’t even know how many that is — be restored to the rolls.

North Carolina has been one of the most active states for voter suppression. Four counties that are in the state’s top-ten in terms of Black population, for instance, opened far fewer early polling precincts this year than in the past. Guildford County, which contains the mostly Black city of Greensboro, cut the number of early voting sites from 16 to one, and has seen early voting numbers plummet from 21,560 to 3,295.

Further, 30% of all Black voters in the state live in areas hit hard by Hurricane Matthew, and Federal courts had to intervene to extend deadlines for voter registration, which the state was attempting to hold firm, perhaps in the hopes that it would be more difficult for Black voters, as well as young voters, to get registered.