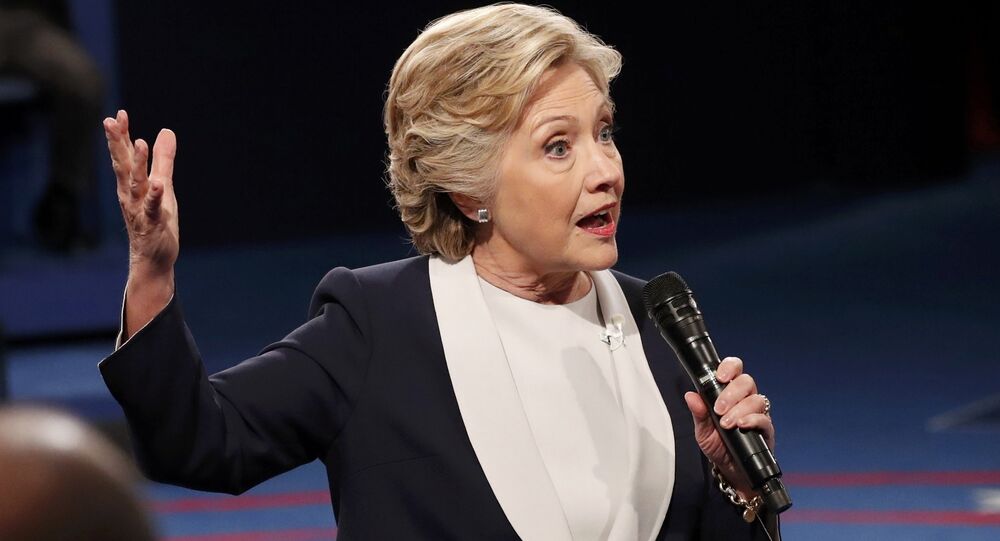 Lost in the furore whipped up in the Western media over Donald Trump in response to the release of the now infamous audio tape, during which he is heard making obscene comments about women, is the fact that his opponent in the race for the White House, Hillary Clinton, appears intent on going to war against Syria and Russia, if elected.

This is the only conclusion to be drawn from the second US presidential debate between both candidates, when during the part of the debate focused on Syria, the former secretary of state said:

"Well, the situation in Syria is catastrophic. And every day that goes by, we see the results of the regime by Assad, in partnership with the Iranians on the ground, the Russians in the air, bombarding places, in particular Aleppo, where there are hundreds of thousands of people, probably about 250,000 still left. And there is a determined effort by the Russian air force to destroy Aleppo in order to eliminate the last of the Syrian rebels who are really holding out against the Assad regime."

This qualifies as a monstrous distortion of the facts when it comes to the ongoing conflict in Aleppo.

Firstly, the putative next president, a politician whose foreign policy experience and knowledge is considered by her supporters to be her strongest suit, has either willfully or ignorantly abstracted the existence of the 1.5 million civilians who are living in government-controlled western Aleppo. The 250,000 she refers to are those civilians still living in eastern Aleppo, which remains occupied by the Nusra Front, now known as Jabhat Fatah al-Sham, a terrorist organization that differs from Daesh in name only, and assorted so-called moderate terrorists, the kind that film themselves beheading 12-year-old boys.

Conspicuous by its absence in the western media coverage of the brutal conflict in Aleppo, have been the indiscriminate attacks by western-supported rebels — depicted as freedom fighters by Mrs. Clinton — on civilians living in the West of the city.

What are we to make of leaders who are able to so easily dismiss the lives of 1.5 million men, women and children?

Clinton, in her remarks on the conflict during the debate, went on to say:

"Russia hasn't paid any attention to ISIS [Daesh]. They're interested in keeping Assad in power. So I, when I was secretary of state, advocated and I advocate today a no-fly zone and safe zones. We need some leverage with the Russians, because they are not going to come to the negotiating table for a diplomatic resolution, unless there is some leverage over them."

Her claim that "Russia hasn't paid any attention to ISIS" isn't shared by western media sources. Perhaps she should have taken a few moments to read them before coming out with such a blatant howler in front of not only the American people but the tens of millions tuning in across the world.

© REUTERS / Azad Lashkari
Turkish PM Worried by Clinton's Remarks on Arming Kurds in Syria, Iraq
One such media source is the International Business Times, based in the US and last time I checked, not owned by the Russian government.

A story appeared on the IB Times website in January of this year with the title, "Russia Airstrikes In Syria 2016: Thousands Of ISIS Targets Hit By Moscow's Jets This Year."

By far the most egregious part of Mrs. Clinton's views on the Syrian conflict is her stated objective of the establishment of no-fly zones and what she describes as "safe zones" in the country.

A no-fly zone, as she must know, is an act of war. It would only compound the violation of Syria's national sovereignty that the US is already guilty of with its presence in the conflict, and set its forces on a collision course with the Syrian, Iranian, and Russian military forces that are currently engaged in liberating Syria from the Salafi-jihadist groups that have poured in from across the world and are being supported, armed, and funded by US proxies such as the Saudis, Qataris, and Kuwaitis.

In parenthesis, isn't it interesting that for people such as Hillary Clinton, jihadists are depicted and described as freedom fighters when they are killing and butchering people in Syria, yet when they pop up in the US or Europe they are terrorists?

In truth, Hillary Clinton and other supporters of regime change in Syria could not care less about the welfare of Syria or its people. For them Syria is merely a chessboard upon which they play their imperialist games, regardless of the human cost and suffering that results. The conflict in Syria is inextricably linked to Washington's malign role in the region going back years, with its refusal to accept that the region is not their domain.

While Donald Trump's views on women and Mexican and Muslims are unacceptable and rightfully condemned, no serious or right-thinking person could possibly have watched the second US presidential debate and concluded that of the two she is the more rational.

On the contrary, for anyone interested in peace, stability, and the defeat of terrorism across the world, the prospect of Hillary Clinton in the White House is a chilling prospect indeed.