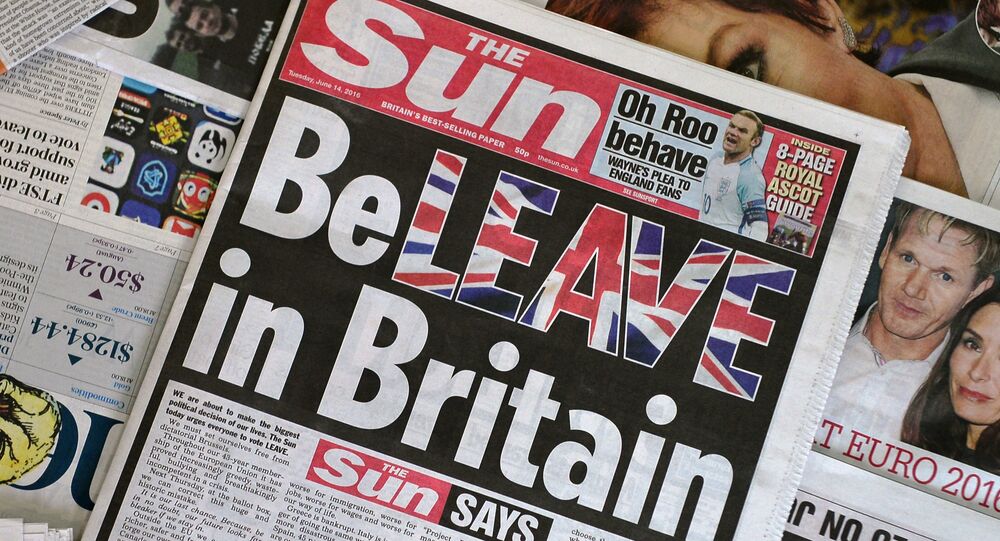 Britain's internal political debate ahead of the vote on the membership of the European Union is focused primary on the impact potential Brexit would have on the country rather than the bloc.

© Flickr / Rareclass
Three UK Economic Think Tanks Issue Final Warning Against Brexit
MOSCOW (Sputnik), Daria Chernyshova and Ivan Kuzevanov — However, the repercussions of the June 23 referendum may transform the Union even deeper than the Kingdom by fueling separatist sentiment in other EU states, triggering calls to alter the bloc’s budget system and making it way less free-trade oriented.

The consequences of the British exit will not be dramatic for the bloc's economy — while Britain's exports to the bloc account for 13 percent of the country's GDP, EU exports to UK represent 3 percent of the bloc's GDP. According to the Oxford Economics forecast, in the worst-case scenario the EU's GDP would be only 0.2 percent smaller due to Brexit's impact in 2030 while the United Kingdom could see a 3.9 percent GDP shortfall.

However, the political dimension of the UK's self-imposed isolation will shake foundation of the Union whose integrity and geopolitical weight will drastically decrease.

© Flickr / Bruno Meyer Photography
Brexit Could Destabilize UK, Boost Scottish Independence Aspirations
The referendum comes at the worst time possible for the European Union with public support for the European institutions plunging drastically amid the refugee crisis and economic difficulties. According to a survey issued by the Pew Research Center earlier in June, 47 percent of respondents in 10 European states have an "unfavorable view" of the European Union.

Success for the Leave campaign in the United Kingdom referendum could motivate other members of the bloc to follow the suit: according to a recent Ipsos Mori survey carried out in eight EU states — Italy, France, Sweden, Belgium, Poland, Germany, Spain and Hungary — nearly half of the 6,000 people interviewed were in favor of holding a UK-style referendum on EU membership in their country. A particularly high number of respondents — 58 and 55 percent respectively — called for such a vote in key members of the Union, namely Italy and France.

Fabian Zuleeg, chief executive designate of the European Policy Centre, a Brussels-based independent think tank, noted that the Eurosceptic forces gaining traction in a number of EU states could exploit the situation.

The rejection of Brussels as a supranational authority by the British public could even boost regional separatism inside EU member states. Catalan President Carles Puigdemont has already said that Brexit could prompt a referendum in the region which is seeking independence, not from Brussels, but from Madrid. Flanders, the Basque country and northern Italy may follow the suit.

Patricia Hogwood, reader in European Politics in the Department of Politics and International Relations in the University of Westminster, believes that although calls for separatism from the establishment in other EU states would be unlikely, the referendum "would certainly promote centrifugal pressures within the EU."

"I think further calls for separatism would be unlikely.  It is more likely that calls for a ‘Europe a la Carte’ would intensify, as member states that are traditionally reluctant to fully commit to selected areas of European integration attempted to follow the UK path of trying to negotiate a special relationship within the EU," she told Sputnik.

© AFP 2021 / Chris J Ratcliffe
Brexit Could Have Negative Impact on Direct Investments in UK Economy
Britain has been allocating increasingly more resources to the EU institutions since 1973. According to a HM Treasury forecast, its contribution this year will reach 11.1 billion pounds.

Since member states' financial contributions are determined according to their economy's relative size, the major part of the burden now carried by the United Kingdom, which was the third largest contributor to the EU budget last year, will fall to German taxpayers as Germany is the biggest European economy.

"Germany has become increasingly reluctant to add to its financial contributions in the EU," Patricia Hogwood pointed out.

According to the researcher, in the case of Brexit, Germans would call for a new basis for the calculation of EU budget payments, to make the terms more favorable for the country.

It could trigger serious opposition from net receivers of EU funds and widen the gap between net contributors (nine states, now including France, Italy, Germany and the United Kingdom which make up more than 60 percent of all contributions) and net spenders (19 states).

© AP Photo / Geert Vanden Wijngaert
Brexit: EU Chief Donald Tusk Warns of 'Disintegration' of European Union
Another major transformation the European Union would see after Brexit is the drop in influence of the so-called liberal bloc of member states. At the moment it comprises the United Kingdom, the Netherlands, the Czech Republic, Sweden, Denmark, Slovakia, Finland, Ireland, Lithuania, Latvia, and Estonia and under the current Qualified Majority Voting system holds a blocking minority in the Council, which will change if the British electorate votes to leave the European Union.

Without the United Kingdom, which has consistently promoted the eastward enlargement of the Union and trade liberalization, the European Union could become less inclined to free-trading, with more protectionist-leaning states as France, Italy, Spain, Greece, Portugal, Hungary and Cyprus strengthening their positions.

Brexit could also stall the ongoing talks on the EU-US Transatlantic Trade and Investment Partnership (TTIP), championed by the United Kingdom. This thesis is confirmed by the strong support of the United Kingdom remaining in the European Union voiced by US President Barack Obama who earlier pledged to reach a final agreement with Europe on the deal by the end of the year.

© AFP 2021 / Chris J Ratcliffe
UK Green Party Head Says London to Lose Much in Case of Brexit
Brexit would be a major blow to the geopolitical role of the European Union. London's weight as a UN Security Council permanent member, actively participating in such international formats as the Group of Seven (G7) and the Group of Twenty (G20), shares in the key global financial institutions, such as the International Monetary Fund (IMF) and World Bank, make a decisive contribution to the role the European Union plays in the international arena.

According to Patricia Hogwood, "in geopolitical terms, a European Union without the UK would carry far less weight as a foreign and security policy actor."

She added that after Brexit, France would be the only remaining EU member state with a truly global perspective, which would drastically boost its role in EU decision-making that could not be counterbalanced by Germany.

"With France at the head of an EU security strategy, relations with NATO would be likely to deteriorate. Germany lacks experience in this area and would not be able to take on a leadership role commensurate with its economic standing in the EU.  Germany has yet to fully ‘normalise’ of its anachronistic military strategic culture of restraint," Hogwood pointed out.

According to Guntram Wolff, director of Bruegel, a Brussels-based think tank that specializes in economics, the Union's overall post-Brexit destiny is unenviable.

"It is going down. Without the UK the European Union becomes smaller and less powerful," he concluded.

Thus, British voters who will cast their ballots on June 23 may not only vote to regain the sovereignty of their own state, but also put an untimely end to the ambitious European Project.