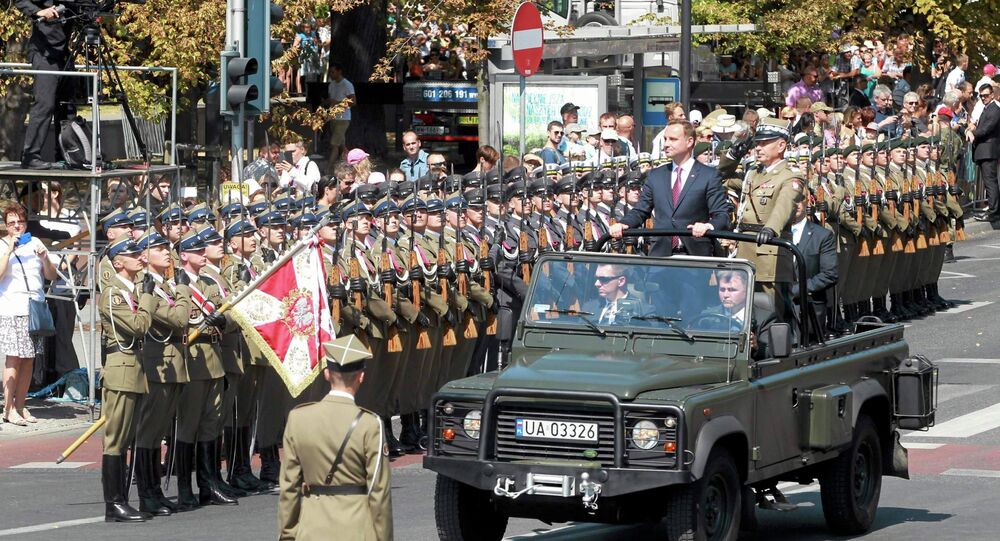 In a recent article, Russian journalist Stanislav Stremidlovskiy suggested that Poland's chest-thumping calls for the militarization of Eastern Europe are connected to the fact that despite its membership in the EU and NATO, Warsaw remains unsure about whether the West would really step up to its defense in the event of war with Russia.

© AP Photo / Czarek Sokolowski
Polish Media Attempts to Explain Country's Rating as Most Russophobic Nation in the World
Stremidlovskiy's article, published by independent news website Regnum, began by noting that during last weekend's celebrations of Poland's Armed Forces Day, President Andrzej Duda emphasized that the whole country was celebrating the 95th anniversary of the "great victory in the Battle of Warsaw" against Soviet forces. The president haughtily declared that "Polish soldiers, regardless of their origin, bravely stopped the onslaught of the Bolsheviks, which was aimed not only against Poland but against the whole of Europe."

Stremidlovskiy noted that in this way, Duda "once against made his contribution to a debate about which Poland's 'political salon' is now extremely worried –namely, on which Polish border, its eastern or western side, is Europe's border located. Officially, it now coincides with the country's eastern borders on the river Bug. But only 25 years ago, for Poland Europe ended on the border between West and East Germany, with the FRG serving as an outpost of the Western world opposed to the Soviet bloc."

The journalist argued that "despite the fact that Poland has since joined NATO and the European Union, which would seem at first glance to finally consolidate their belonging in the 'civilized world', in Warsaw, there is still no firm conviction that the West will meet the offensive of the 'eastern barbarians' on the River Bug, rather than at the Vistula [near Warsaw], or worse, at the Oder. And Poland has a historical precedent for such thoughts."

© Flickr / sualk61
Poland Needs World Class Media, Not 'Festival of Lies and Russophobia'
Stremidlovskiy explained that in the aftermath of the First World War, when Poland gained its independence from the crumbling Russian Empire, and then proceeded to fight a bloody offensive war against the fledgling Soviet state on the territory of present-day Belarus and Ukraine, "the West attempted to block Poland's attempts to expand eastward."

The journalist recalled that "in a telegram dated August 22, 1920, when it became clear that the war had turned in Warsaw's favor, French Prime Minister Alexandre Millerand warned that 'it is of utmost importance that Poland does not create obstacles to peace, advancing territorial claims which would expand Polish territory beyond those limits which the Polish government had committed itself to. France can only impose on Poland sole responsibility for such claims, strongly advises it against putting them forward, and does not in the least support them.'"

Stremidlovskiy explained that US President Woodrow Wilson held a similar position, issuing a diplomatic note dated August 10, 1920 with a sharply negative assessment of Polish territorial ambitions beyond the Bug River.

Citing Jagiellonian University Professor Andrzej Nowak, Stremidlovskiy noted that it was "British Prime Minister Lloyd George who struggled most of all against 'Polish imperialism'," being "of the opinion that Soviet Russia must be reintegrated as soon as possible into the European political order and in trade."

© East News / USA/Science Photo Library
Post WW2 World Order: US Planned to Wipe USSR Out by Massive Nuclear Strike
"Poland was considered an obstacle for the British prime minister," Nowak explained. "He would prefer to reduce its territory to a size acceptable to Moscow and Berlin –the partners of future trade relations. It was from this that the so-called Curzon Line came about, drawn up by Sir Philip Kerr, Lloyd George's private secretary and close confidant. First and foremost it was about territorial concessions. In accordance with the Curzon Line of July 11, 1920, Soviet Russia was to gain not only the lands east of the Bug, but also Eastern Galicia, which had never belonged to Russia." The professor noted that it was not until 1923 that the Council of the League of Nations decided to recognize Poland's borders with Soviet Russia.

Stremidlovskiy suggested that "the memories of these events have defined the mentality of Polish politicians and experts. The Ukrainian crisis, triggered by the coup d'état in Kiev in February 2014, revived old fears that Poland would become the buffer zone between 'imperialist Moscow' and the 'peaceful West'. Warsaw began demanding from NATO the strengthening of its eastern flank, putting forward the question of creating a 'powerful military fist' in the form of permanent bases on Polish soil."

The columnist noted that the Polish elite vainly attempted to "cite the case of Germans during the Cold War, politicians declaring that if the Germans played the role of a border fortress holding back the onslaught of the Soviet hordes, Poland and the Baltic States could now play this role today; therefore NATO bases and the American military contingent must be moved further to the east."

"Berlin," however, "countered these Polish informational attacks by noting that under the terms of the agreements reached in the 1990s between the Alliance and Russia, the eastern 'newcomers' must not have such infrastructure, and this gives cause for stress for the Poles. They perceived the German reaction as proof of the existence of 'first' and 'second class' states among NATO's members. To Poles, it is clear that in the event of a real threat, the 'second class' would have to fend for themselves."

© REUTERS / Kacper Pempel
New President's Call for More NATO Forces in Poland Threat to Alliance's Unity - German Media
The journalist recalled that after President Duda publically announced that he would "seriously present to Berlin the issue of the defense of Poland's eastern borders, at the same time implying that of the eastern borders of the European Union, Munich newspaper Suddeutsche Zeitung responded by warning Warsaw that its persistence violated the compromise reached at the NATO summit in Newport in September of 2014, creating a threat not only in relation to Russia, but also discord within the Alliance itself." Stremidlovskiy pointed out the Polish media's respect for the German publication, adding that the article ultimately came to be viewed "as a signal to Duda and his Law and Justice Party from among influential German circles to be more restrained in their rhetoric."

The journalist concluded his piece by noting that while Polish officials have actively "appealed to the heritage of the Polish-Soviet War, [where] Warsaw had 'heroically' defended against the Bolshevik onslaught of Europe, it does not seem likely for the West today to perceive the Russian Federation in the same way it did Soviet Russia."

Furthermore, "the use of the phrases about the 'clash of civilizations' in Ukraine is more the prerogative of newspaper propagandists than of real diplomacy. Therefore, the ideological 'cavalry assaults' by Poland's political salon are likely to bring harm, first and foremost, to Poland itself, which will not be able to get what it wants at next year's NATO summit in Warsaw."

Poland 'Lost Right' to Declare Its Impartiality in Ukrainian Conflict