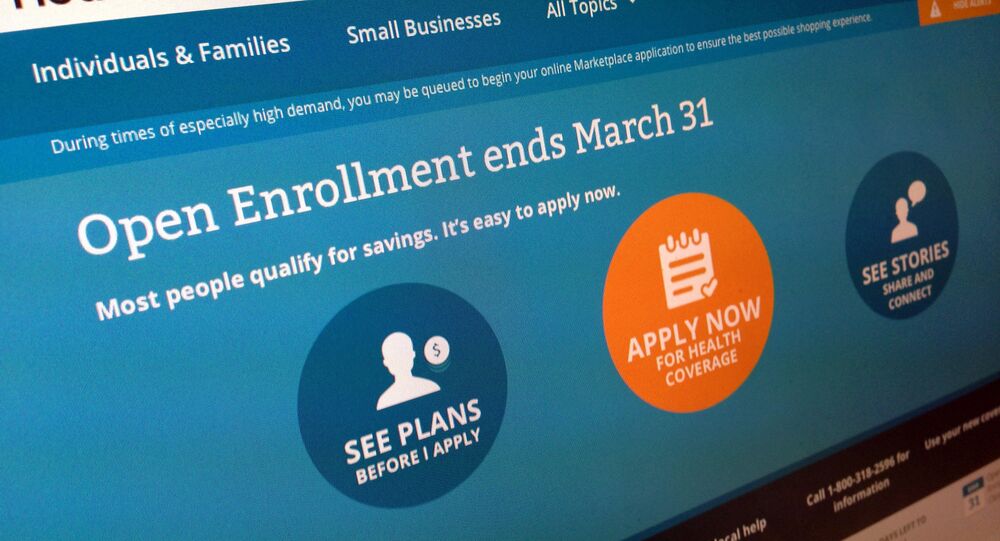 Obamacare to Blame for Soaring US Medicine Costs

Experts claim that the soaring costs of US medicines under the Affordable Care Act are caused by the program’s refusal to rein in giant American pharmaceutical corporations and challenge their profits.

WASHINGTON (Sputnik) — The soaring costs of US medicines under the Affordable Care Act, or Obamacare, are caused by the program’s disastrous refusal to rein in giant American pharmaceutical corporations and challenge their enormous profits, experts told Sputnik.

“The basic problem is that the Affordable Care Act should never have been given to run through the private insurance industry,” City University of New York School of Public Health Professor Dr. David Himmelstein told Sputnik on Tuesday.

Himmelstein explained that US insurance companies are wastefully run, but make exorbitant profits as they pass costs onto the purchasers of medicines, regardless of how poor and sick they are.

© Fotolia / Yaroslav Pavlov
Obamacare: Fresh Polls Show More Than Two Thirds of Enrollees Dissatisfied
“Their practice is incredibly wasteful and therefore the operations of the Affordable Care Act are too,” he noted.

The Obama administration, Himmelstein added, had abdicated its powers of government and social responsibility by refusing to regulate or challenge the prices set by the pharmaceutical industry and its self-interested operating practices.

“There is no regulation of drug prices,” he said. “The government imposes no limits on the pharmaceutical industry, it does not police it: It does not even negotiate with it.”

Himmelstein also pointed out that medicines in the United States on average are 40 percent more expensive for patients than is the case in Canada.

As a result, the US government is “throwing away hundreds of billions of dollars a year,” he said.

In contrast to Obamacare, Himmelstein argued, the traditional US Medicare program has been well run and runs at an average of 2 cents overload for costs of the program for every dollar spent on it.

“But the Affordable Care Act requires 13 cents of every dollar spent on it for to pay administrative costs, paperwork and the profits of the pharmaceutical companies and the health insurance corporations,” the professor continued.

He went on that the Affordable Care Act’s structure also drives up the paperwork costs for doctors and hospitals.

The immense bureaucratic burden is also very damaging to patient care and overall operating costs because it requires immense time and resources from doctors and nurses, and distracts them from time and efforts that should be directed to their patients, he argued.

In approving the Affordable Care Act, therefore, the Obama administration “has abdicated all the leverage it should possess to regulate the insurance and pharmaceutical companies and keep health costs down,” Himmelstein concluded.

Woolhandler argued the US insurance companies were able to get away with imposing such costs because of the enormous political power they enjoy in Washington.

“The health insurance industry has tremendous financial and political power, and used that power to ensure that the Obamacare legislation included an enlarged role for them,” she said.

Woolhandler advocated that the United States needed to move forward from Obamacare to a single payer plan, sometimes called expanded and improved Medicare-for-All.

On July 2, 2015, President Barack Obama acknowledged in a speech in Madison, Tennessee that although the Affordable Care Act had extended health coverage to 16 million Americans, twice as many — 32 million people — still lack healthcare coverage.

US Senate Majority Leader Readies Another Vote to Repeal ObamaCare