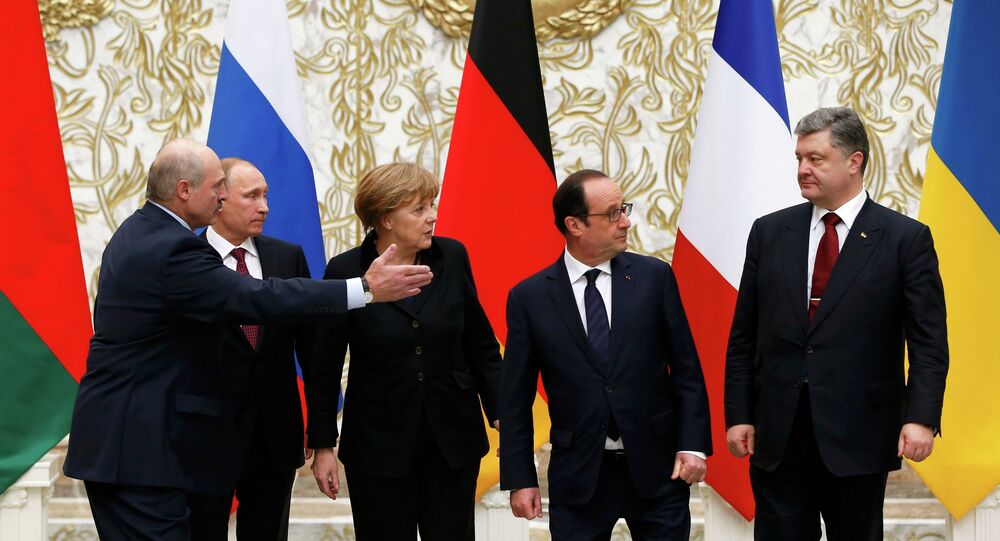 The US-backed Ukrainian leadership is making every effort to sabotage the Minsk accord, Stephen F. Cohen emphasized, warning that the alternative to the Minsk 2 agreement is a larger war between Moscow and Washington.

The Ukrainian leadership is deliberately undermining the Minsk 2 agreement, brokered by Germany, France and Russia in February 2015, underscored Stephen Cohen, a prominent American historian and professor of Russian studies at Princeton University and New York University, noting that Kiev can do nothing significant without Washington's backing.

© AP Photo / Mindaugas Kulbis
US Flexes Military Muscle to Get Rise Out of Russia for Ukraine Invasion - Stephen Cohen
The historian referred to a number of legislative bills signed by Ukraine's President Poroshenko, who evidently reversed the promises made by Kiev during the Minsk negotiations. Although Poroshenko himself approved the Minsk accord, since then Kiev has acted in contradiction to the deal.

Furthermore, several days ago the Ukrainian President announced that "any concept of federalization or home rule was a poisonous cancer that would destroy Ukraine," the professor noted.

Another nail in the coffin of the Minsk deal is the legislation banning Communist ideology and symbols and eventually equating communism to Nazism. The point is that the majority of those civilians who supported the Communist party of Ukraine are living in the East, the historian underscored.

On the other hand, the legislation is not a good sign for democracy in Kiev, since it imposes censorship. The Communist party of Ukraine has long been a very important party, enjoying public support in the country. Now it is banned and anyone who speaks in favor of this party is committing a criminal offense, according to the new law, the historian pointed out.

At the same time Kiev is supporting ultra-nationalists, adding fuel to the fire of the political crisis in the country.

Remarkably, Kiev's anti-Minsk stance is evidently supported by both Republican and Democratic lawmakers in Washington, the historian emphasized.

© AP Photo / Pablo Martinez Monsivais
Psaki Comments on Russia and US Relations, Lethal Aid to Ukraine, Crimea's Issue
The professor noted that Washington continues to blame the Kremlin of the Ukrainian crisis and "military aggression" against Kiev. Still, the US and NATO leaderships failed to provide any evidence of Russia's alleged engagement in the Ukrainian turmoil.

By aggravating further tensions with Moscow over Ukraine's crisis, Washington and its allies risk dealing a severe blow to the current geopolitical status quo in Europe. Russia is still an important element of global security and it cannot be isolated, the historian stressed, referring to the fact that since the West imposed sanctions on Moscow, the Kremlin has signed a huge number of international deals, much more that the US itself.

While Washington urges EU leaders to toughen their sanctions policy against Russia, it is obvious that the majority of NATO European allies are against direct confrontation with Moscow and a military resolution of the conflict. The US' irresponsible policy may lead to an undesirable transformation of geopolitics in the European region, the professor warned.