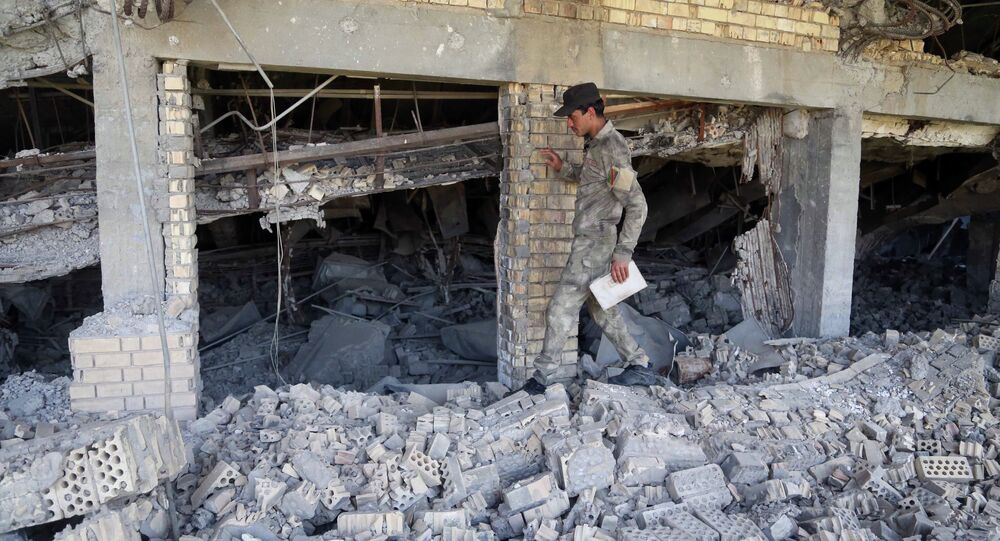 As the world is shifting to multi-polar international decision-making, the time has come to hold US policy makers accountable for numerous war crimes committed during the Iraqi war, former UN humanitarian coordinator for Iraq Hans von Sponeck noted.

"Following years of clandestine co-operation between US spies and Iraqi opposition groups, the US Congress came out into the open by approving the Iraq Liberation Act, which stated that US policy should seek to 'support efforts to remove the regime headed by Saddam Hussein'."

Curiously enough, the Act was signed by US President Clinton on October 31, 1998, and five years later a full-scale military campaign was launched by George W. Bush under an utterly false pretext.

While Washington "legitimized" the operation by saying Saddam Hussein, then Iraqi leader, had weapons of mass destruction (WMD) and entered into an alliance with terrorists including al-Qaeda, all these statements did not stand up to scrutiny.

© AFP 2021 / ALI AL-SAADI
Claims of US Failure in Iraq Misrepresent Situation on Ground - Biden
Before the invasion of Iraq some UN arms inspectors confirmed that Baghdad possessed no WMD's and was not a threat. At the same time many international observers knew that Iraq, a secular state, also had no ties with Islamist extremists, the expert underscored.

The point is that thirteen years of sanctions, a nearly total financial and trade embargo, imposed by the UN Security Council on the Iraqi Republic in 1990 did not undermine the regime of Saddam Hussein.

The UN sanctions became a political tool of the West and the people of Iraq suffered tremendously, Hans von Sponeck said.

Only WMD and terrorism falsifications allowed Washington to unleash the war and overthrow the unwanted regime in Iraq.

© REUTERS / U.S. Air Force/Senior Airman Matthew Bruch/Handout
US, Coalition Conduct Nine Airstrikes Against ISIL in Syria, Iraq
Today, 12 years after the invasion and four years since the end of the US occupation of Iraq, the country is facing numerous problems, including crimes, secessionism, sectarianism, and ISIL insurgency. The educational system of the country is ruined. Iraq has become a transit hub for drug trafficking.

The US Senate's assessment of CIA torture practices released in December 2014 confirmed that the US "war on terrorism" was justified by entirely false claims and revealed hideous details of interrogation techniques used by the American CIA servicemen on the occupied territories.

© AFP 2021
Iraqis clear away debris in front of a construction materials warehouse 12 August 2000, the morning after US and British warplanes bombed residential districts, a grain silo, the warehouse and the traffic department of the southern Iraqi city Samawa. (File)

Alas, those responsible are still refusing to accept responsibility, the expert noted bitterly.

© Flickr / takomabibelot
US Torture Tactics Go Global: Is Gitmo Just The Tip Of The Iceberg?
Hans von Sponeck emphasized that the release of the CIA Torture Report has prompted the Kuala Lumpur War Crimes Commission to submit two volumes of torture evidence to a chief prosecutor of the International Criminal Court in The Hague.

The data includes evidence provided by prisoners from Abu Ghraib, Bagram and Guantanamo.

As the world is shifting from the US unilateralism to multi-polar international decision-making, the time has come to hold those responsible for crimes committed in the name of "regime change" and the "war on terrorism" accountable, underscored the expert.

US Jets Strike Iraqi Forces' Positions Instead of ISIL in Tikrit