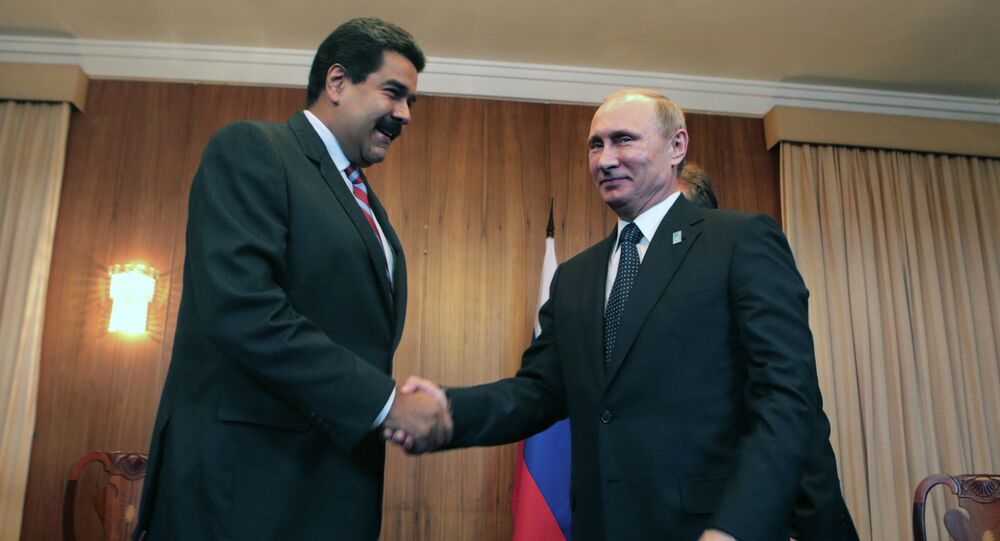 Ariel Noyola Rodriguez, economist and columnist for Contralinea Magazine, notes that US attempts to contain emerging economies including Russia and the countries of Latin America work only to hasten these nations' efforts to create a new, truly multipolar world order independent of Washington's influence.

© REUTERS / Jorge Silva
EXCLUSIVE: If There’s a Threat On This Continent, It’s the US - Ecuador FM
The economist argues that the Eurasian Union project and Latin America's Common Market of the South (Mercosur) complement each other in a fundamental way, serving as "a crucial mechanism in the defense of sovereignty and the development of a multipolar world order."

Rodriguez explains that over 50 percent of Russian exports to Latin America consist of fertilizers, minerals, and fuel. In return, Latin American countries provide Russia with agricultural products, meat and electronic components. Rodriguez notes that "in accordance with the projects elaborated by the Institute of Latin America, part of the Russian Academy of Sciences, bilateral trade will reach 100 billion dollars by 2030, a 500% increase."

The expert notes that with the downturn in trade between Russia and the EU, "Latin America emerges as a substitute market and, at the same time, is the main recipient of investments in high technology. In this sense, the investment projects of the National Oil Consortium (conformed by Rosneft, Gazprom Neft, Lukoil, TNK-BP and Surgutneftegas), which are engaged with companies from Brazil, Argentina, Venezuela, Guyana and Cuba, among other countries," are worth highlighting.

© Flickr / Gаme of light
Buenos Aires Development Forum Paints US as Threat to Latin America
Mr. Rodriguez explains that the global recession, deflationary tendencies on the commodities market, the economic downturn in Asia, and the economic sanctions being used as a weapon by the US and Europe against Russia and Venezuela have only "revealed the urgent necessity for Russia and Latin American countries to increase their diplomatic relationship."

Rodriguez argues that while the Eurasian Economic Union was once envisioned as "a bridging mechanism between the Asia-Pacific region and the European Union," this possibility has at least temporarily been rendered moot "by the siege imposed against the Russian Federation by the North Atlantic Treaty Organization." As a result, the EEU has broken "through its continental limits by creating free trade zones with China in Asia, Egypt in North Africa and the Common Market of the South ([comprising] Argentina, Brazil, Paraguay, Uraguay and Venezuela) in Latin America."

The economist notes that the existing strategic partnership between the EEU and Mercosur has two goals at the moment: "In the first place, its goal is to reduce the presence of the United States and the European Union in trade flows and extra-regional investments. Furthermore, the relationship aims at speeding up the worldwide process of de-dollarization by using national currencies as a method of payment." Rodriguez cites Russia's plans to develop an alternative to the SWIFT system of payments, and SUCRE, a regional currency system proposed for transactions between Latin American countries, as "evidence of the increasing role of both parties in the development of institutions and new financial mechanisms that leave the orbit of the dollar behind."

Most exciting of all, Rodriguez argues that if done right, extensive scientific-technical cooperation between the EEU and Mercosur could stimulate industrial development of both regional economic blocs: "There is a wide range of possibilities for the development of scientific-technical alliances that, on one hand, [could] stimulate industrial development in Latin America, and, on the other hand, [could] contribute to the diversification of [exports] from Russia, which are currently concentrated on hydrocarbons."

© Sputnik / Grigoriy Sisoev
Mercosur Wants to Expand Cooperation With Eurasian Economic Union
Noting the implications of a strategic economic alliance between the two blocs, Rodriguez cites impressive statistics showing that the two economic blocs have a combined territory of 33 million square kilometers, a population of nearly 450 million, and a combined GDP of 8.5 trillion dollars, or 11.6 percent of nominal global GDP.

Ultimately, Rodriguez believes that for this "enormous opportunity" for cooperation to advance, "the Eurasian Union and Mercosur will have to focus their efforts succinctly on greater financial cooperation, and simultaneously coordinate a common front in defense of national sovereignty and the principles of international law."

Rodriguez's article, entitled "How the Common Market of the South and the Eurasian Union Defy the United States and the Hegemony of the Dollar," can be found in full here.