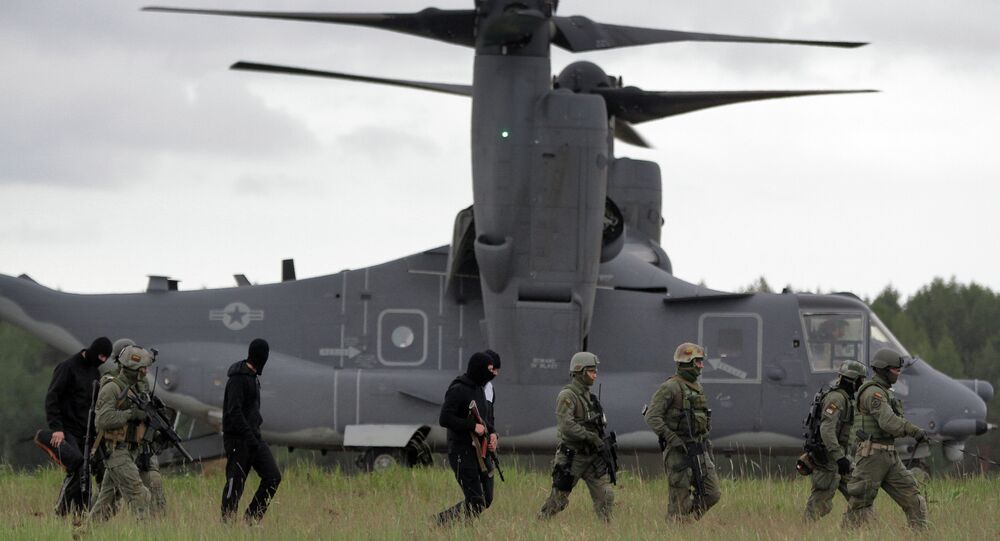 © Sputnik / Vladimir Pesnya
NATO’s New Lease on Life: Confronting Foes of Its Own Creation
Ekaterina Blinova — Murray Dobbin, a Canadian author and journalist says the Western foreign policy course is based on imperial hubris rather than on critical thinking and warned against catastrophic consequences of warmongering in Ukraine.

"Canada, Britain, the US and the boys with their toys in NATO headquarters are looking for a fight with Russia. Throughout the confrontation and provocations these protagonists treat Russia as if it is some insignificant middle power that can be provoked with impunity. That is just dangerously stupid and stupidity is something the West can ill-afford given all its internal problems – economic stagnation, unsustainable inequality, collapsing infrastructure," the author emphasizes.

Although it has almost become a clichés that most politicians are astonishingly uninformed of numerous political, social and historical nuances of world events they have to cope with, it looks like many of Western decision-makers are living in some alternative reality based on "imperial hubris instead of science and expertise," the journalist points out.

© AP Photo / Hadi Mizban
Bush-Blair Notes Key Reason for Delaying Report Into UK Role in Iraq War
Illustrating such an approach, Murray Dobbin cites Pulitzer Prize-winning journalist and author Ron Suskind who interviewed an unnamed aide to George W. Bush. The aide claimed that while people "believe that solutions emerge from [one's] judicious study of discernible reality," "that's not the way the world really works anymore." According to the aide it is Washington who creates new realities, while others are just left to study what the US has done. "We're an empire now, and when we act, we create our own reality," he said.

The Canadian journalist emphasizes that the hideous Iraqi war, the rise of the Islamic State and the disastrous ongoing strife in Libya can serve as a vivid example of the "new realities" created by the United States, nailing the dangerous "anti-intellectual roots" of American policy-making.

Western response to the crisis in Ukraine has indicated that not only the US, but also Canada, the UK and the European Union have fallen into the trap of non-critical thinking, notes the author. Indeed, an investigation conducted recently by the British House of Lords revealed that both Britain and the EU has misread the mood of the Kremlin regarding the Ukrainian affairs which led them "sleepwalking" into the crisis.

© Flickr / CSIS | Center for Strategic & International Studies
Ukraine's NATO Membership Should Be Off the Table - Brzezinski
"How could they have misread Putin so badly? How was it possible that senior politicians could have been unaware of the centuries-long relationship between Russia and Ukraine? Of the EU and US promise in the 1990s that they would not expand NATO eastward?" Murray Dobbin asks.

According to the journalist, scientific expertise and well-balanced decision-making have been ultimately replaced with the "crusader rhetoric" of prominent Western leaders and leading mass media sources. The results could be devastating, warns the author, noting that even one of America's pre-eminent warmongers, Henry Kissinger, has already expressed his growing concerns regarding US involvement in Ukraine's military crisis.

"There is still a chance that the world can step back from the brink in Europe," writes Murray Dobbin, "If it doesn't we will know who to blame," he concludes.