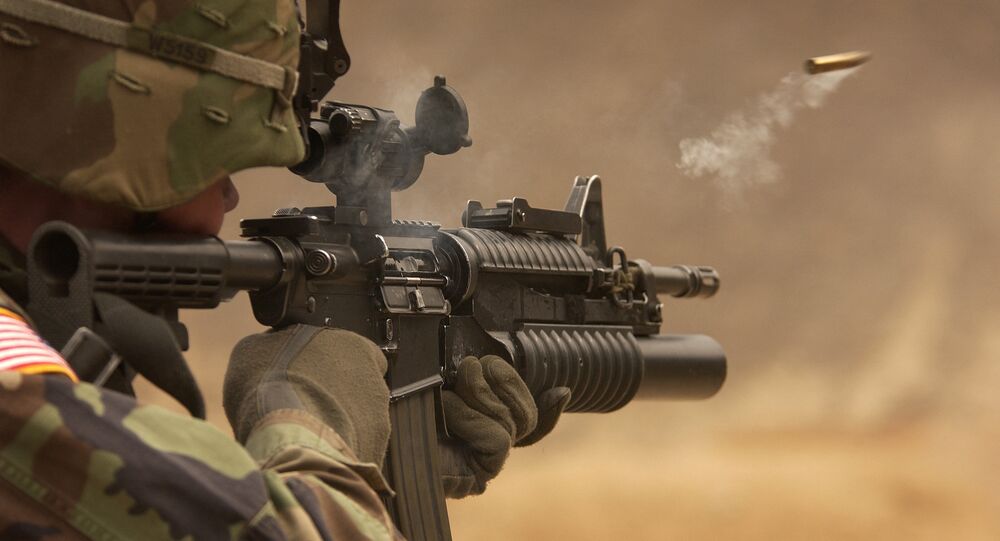 American political analysts rejected the idea that the United States should provide Kiev with defensive weaponry, a survey found.

Ekaterina Blinova — Eighteen of the twenty-seven American political analysts denounced an initiative to arm the Ukrainian military forces as dangerous and futile, according to a survey.

© REUTERS / Gleb Garanich
US to Send Arms to Ukraine Using Private Contractors - Hacker Group
According to Keith Darden, Associate Professor in the School of International Service at American University in Washington, D.C., "the talk of arming Ukraine only feeds the delusion that Ukraine can win on the battlefield." The analyst considered the Minsk II agreement "the best deal" for Ukraine that can lead to ultimate solution to the longstanding crisis.

However, instead of convincing the Ukrainian authorities to carry out necessary constitutional reforms aimed at decentralization of the power, obtaining a non-aligned status and aborting the schemes Kiev's corrupted leaders who are used to stealing huge sums of money at Ukrainians' expense, Washington is indulging Kiev's "unrealistic hope" that Ukrainian troops can become a "well-funded and well-armed proxy army in a fight between Russia and the West," the analyst underscored.

By providing defensive weaponry to Ukraine, Washington will undermine, not reinforce, the Minsk agreements implementation, while Ukraine will continue its military campaign shedding "blood and territory as long as it is on the table," warned Keith Darden.

© Flickr / Phil Roeder
US Edits Intelligence Data Before Sharing With Ukrainian Military
John J. Mearsheimer, R. Wendell Harrison Distinguished Service Professor of Political Science at the University of Chicago, emphasized that arming Ukraine will inevitably lead to the further escalation of violence. He stressed that the US "trans-Atlantic relations" will be put under threat, since the Europeans, especially the Germans, strongly oppose the plan of providing Ukraine with military aid.

Another expert, Joshua R. Itzkowitz Shifrinson, a young Assistant Professor at the George Bush School of Government and Public Service at Texas A&M University, called into the question the "defensive weaponry" term pointing to the fact that the armament can be used in both defensive and offensive operations. Expressing his doubts regarding the ultimate purpose of Washington's defensive assistance, the expert noted that it is unlikely that Moscow would qualify the US's actions as a "defensive aid" and consider Washington just as a "security provider."

What do you think is the most important event of the week?
Voted: 971
All polls
At the same time, the expert emphasized that the people in eastern Ukraine are highly motivated to limit Kiev's influence or to leave the state. Joshua R. Itzkowitz Shifrinson underscored that by adding fuel to the fire of the ongoing conflict in Ukraine Washington is risking further escalation on the ground, aggravating tensions with Moscow, putting the United States and Russia on a dangerous "direct collision course."

Peace negotiations between the Ukrainian government, the rebels and Moscow will end the violence, the expert stressed, while the US "assistance" will only exacerbate the problem, prompting the two sides "to fight harder and longer, than they would."

US, UK Attempt to Change OSCE Mandate in Ukraine - Russia's Envoy to UN