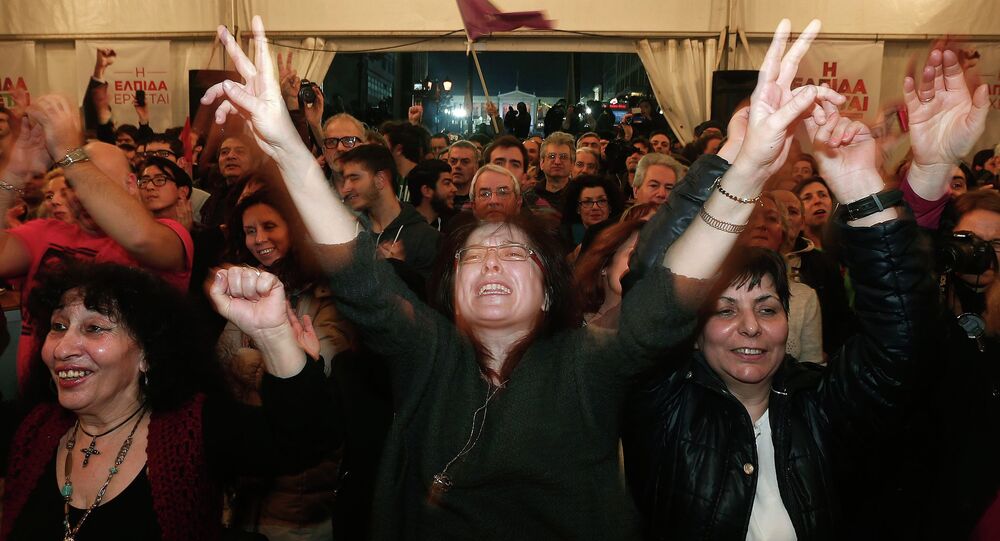 A former economic advisor to the Reagan administration believes that Western banks and governments are a threat to Greek sovereignty and to its peoples' standard of living, and that only by re-aligning itself with Russia can Greece stave off these 'marauders.'

MOSCOW, January 30 (Sputnik) — Greece will be able to escape being dominated by "marauding" Western banks if it pursues greater cooperation with Russia and the BRICS, believes Paul Craig Roberts, former Assistant Secretary of the Treasury in the Reagan administration.

In an article published on Thursday on his website, Roberts notes that the collapse of the Greek stock market is a warning to Greek authorities that Europe would not make any concessions to the Mediterranean states, or allow for a unilateral improvement of relations with outside powers like Russia. "The warning from the EU and Wall Street is clear: Defy us and we will destroy you," Roberts says.

What do you think is the most important event of the week?
Voted: 1072
All polls
Roberts notes that when it was publicized that the Greek government would include representatives of the Communist Party, and seek to improve relations with Moscow, the West launched an attack on the Greek stock market indexes and securities markets. "To remind the newly elected Greek government of the whip that is held over Greek financial markets, Greek bond and stock prices were assaulted and driven down," Roberts notes. Thus, the yield on three-year bonds rose by 2.66 points to 16.69 percent, while the Athens Stock Exchange index fell by 9.2 percent –a three year low, resulting in serious problems for banks.

Roberts believes that the Greek debt crisis is being used to confirm the non-sovereign status of the member states of the European Union, and to show that it is the populations of these countries, rather than the banks which lend to them, which are responsible for the debt burden of the state. "And these populations must accept the reduction of their living standards in order to ensure that the banks do not lose any money," the economist notes.

"This is the 'New Democracy.' It is a resurrection of the old feudal order. A few super-rich aristocrats and everyone else serfs obliged to support the ruling order," Roberts argues.

The former Reagan advisor equates the actions of Western banks and governments to those of "marauding raiders", and notes that in the elections, Syriza received 37 percent of the vote, which in his view is not sufficient to support a large-scale campaign against the predatory politics of the West. For the new Greek government, the way out of crisis is collaboration with Russia and with financial institutions offering an alternative to those of the West.

"Can Greece escape from a situation comparable to the European Dark Ages when populations were ravaged by marauding raiders? Perhaps if Greece realigns with Russia and gains financing from BRICS," Roberts notes.