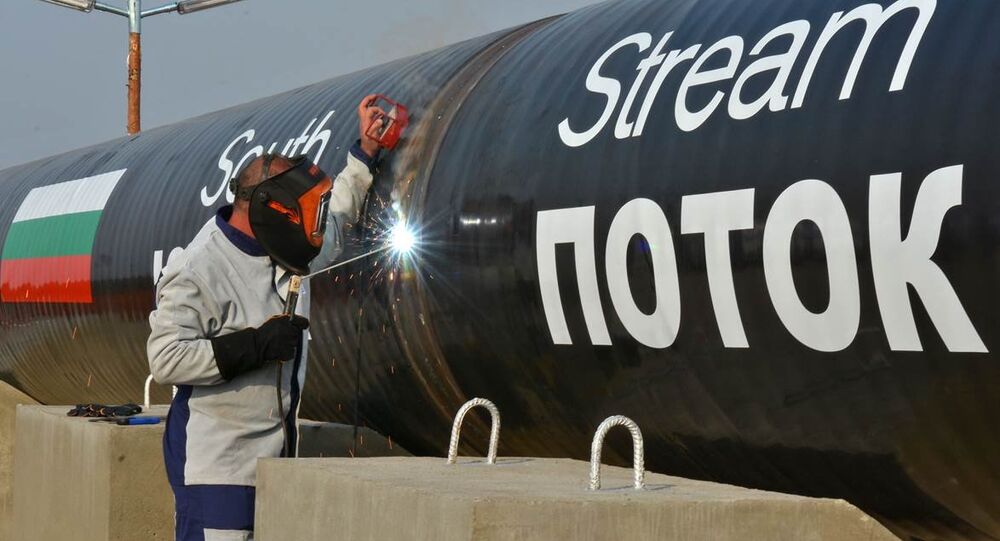 According to experts, the termination of the South Stream project is Russian tool to deal with Europe, because its dependence on Russian oil and natural gas is a potentially powerful strategy.

WASHINGTON, December 3 (Sputnik) – Russian President Vladimir Putin's announcement of the cancellation of the South Stream natural gas pipeline to eastern Europe is a source of short-term leverage in Russia's dealings with Europe, but has also consolidated European resolve to diversify its energy sources in the future, experts told Sputnik Tuesday.

"For the time being, European countries are not drilling shale gas, there's not a ton of US LNG [liquefied natural gas] out there on the market, there are not a ton of alternate supplies. So Russia does have some leverage," executive vice president of the energy independence advocacy organization, Securing America's Future Energy, Sam Ori told Sputnik.

Ori noted that in the short term, Europe's dependence on Russian oil and natural gas is a potentially powerful strategy.

"In the medium term, as more US gas does get into the market, and more US LNG starts to flow to the market, it may be that that kind of pipeline politics becomes less effective," he added.

The Ukraine conflict and subsequent strain in EU-Russian relations has caused Europe to seriously consider reducing its reliance on Russian natural gas, former staffer for Vice President Dick Cheney and member of the Commission on Energy and Geopolitics John Hannah told Sputnik.

"Europe is going to look at its vulnerability to Russian energy supplies and begin over time to take action to reduce it," Hannah pointed out.

The cancellation of the pipeline came after Bulgaria refused to give Russia permission to go ahead with the construction, which would make its landfall in Bulgaria from the Black Sea. Bulgaria's refusal was likely a result of "pressure" and "consensus in the EU not to allow another Russian pipeline of gas," Hannah told Sputnik.

On Monday, President Putin announced the cancellation of the South Stream pipeline during a trip to Turkey. Russia will be looking to other markets to export its natural gas, he announced, but because of its "non-constructive" stance on the project, Europe will not be a recipient of the liquefied natural gas.

The same day the South Stream project was cancelled, Gazprom CEO Aleksey Miller announced the construction of Black Sea gas pipeline through Turkey with the an annual capacity of 63 billion cubic meters.