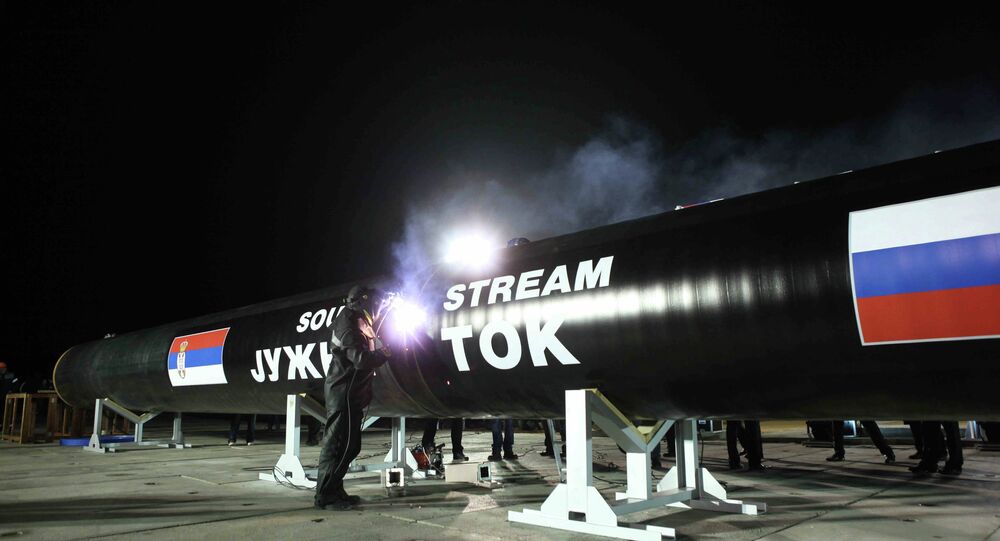 Russia’s decision to divert the ‘South Stream’ from the EU to Turkey triggered various reactions, from panic to concern to a confirmed preliminary awareness.

MOSCOW, December 2 (Sputnik) — The $40 billion ‘South Stream’ gas pipeline, in the works since December 2012, was abruptly cancelled yesterday amid decreasing energy prices, shrinking European demand and the international crisis over Ukraine. The announcement by Russia’s Vladimir Putin to halt the ‘South Stream’ project sparked a wide variety of reactions in different parts of world, both in terms of rhetoric and possible political action.

The European Union on Tuesday expressed hopes to continue cooperation on the ‘South Stream’ project with Russia, having said that a deal with member states is still possible. The main reason behind yesterday’s announcement by Putin to abandon the project was that Bulgarian authorities had failed to coordinate construction efforts with Russia.

© Sputnik / Aleksey Nikolskyi
Cancelled South Stream Project Bulgaria’s Last Chance of Energy Independence: Ex-Minister
“The next meeting had been planned for the 9 December 2014 and it will take place regardless of the announcement by Russia to stop the project,” Maros Sefcovic, the EU’s vice president for energy said, as quoted by the Wall Street Journal. “Obviously this new development will be an additional element that will be discussed in that meeting.”

The ‘South Stream’ was planned to transport Russia’s natural gas supplies directly into the EU bypassing Ukraine. The pipeline would link Russia to Bulgaria via the Black sea, and then to Serbia, Hungary, Slovenia and Austria. The project was controversial from the very start due to its non-compliance with EU energy legislation and was considered a competitor to the Turkey-to-Austria Nabucco gas pipeline, passing through the same nations.

Experts in Europe perceived yesterday’s announcement by Putin as an attempt at leveraging pressure upon Bulgaria, presumably unwilling to grant more favorable commercial conditions to Russia’s state-controlled natural gas monopoly Gazprom, one of the partners responsible for the realization of the ‘South Stream’.

© REUTERS / Francois Lenoir
Mogherini: EU Needs to Increase Energy Security Amid South Stream Closure
“You could interpret this as a threat against Bulgaria,” Christian Egenhofer of the Brussels-based Centre for European Policy Studies said, as quoted by the Wall Street Journal.

The partner enterprises working on the ‘South Stream’ include, apart from Russia’s Gazprom, the Italian multinational Eni and the French government-controlled Électricité de France. Previously, observers speculated that a large issue regarding the venture was Gazprom’s claims for the control of the whole project, since EU laws forbid the same company to simultaneously own infrastructure and supply gas into it.

"The Commission has hosted several meetings that aimed at finding a solution to this project that would fully comply with the EU legislation," Sefcovic said after yesterday’s announcement by Putin. Earlier, the European Commission made Bulgaria freeze the pipeline’s construction.

© Sputnik / Ramil Sitdikov
European Commission's Position on South Stream Remains Unchanged: Press Service
In Bulgaria, Russia’s unilateral cancellation of the ‘South Stream’ was perceived as a pressure-leveraging tactic as well. Bulgaria’s Commission on Energy deputy chairman Martin Dimitrov said he believed Russia would not abandon the project “no matter what.”

“This is a policy stroke of Vladimir Putin and Russia. They will not abandon the ‘South Stream’ no matter what,” Dimitrov said. “A speculated rerouting of the pipe into Turkey would render it at least twice or even thrice as expensive, making it economically inefficient and impossible.”

This move may trigger ‘hysteria’ in Bulgaria, with people “demanding to accept all of Russia’s claims,” he added.

Putin’s announcement on the ‘South Stream’ did not come unexpectedly, said experts from across the Atlantic. Mike Moore, executive director for US oil enterprise NACCSA, said that while Russia is more interested in joint ventures with China, the ‘South Stream’ may be easily postponed to a more distant perspective or abandoned completely. “The decision was not a surprise. Everybody was expecting it,” he said. “Things are done via trial and error in this business.”

© REUTERS / Yves Logghe
No Compensation for Bulgaria After South Stream Project Closure: EU Source
Pyotr Golitsyn of Iowa-based TMK IPSCO said that what is happening is just a temporary halt in the works on the ‘South Stream’. “This is an important project for all parties involved. When people speak of energy security, they tend to forget that both the supplier and the consumer are equally interested in it.”

“Serbia has invested a lot of work into this project. I think the project was good for Serbia, we did not back down from it even under severe pressure, but now we have to pay for the conflict between great [powers],” Vucic said.

© Sputnik / Sergey Guneev
Cancelled South Stream Project to Cause Serbia Serious Damage: Serbian Gas Association
Other European policymakers described the consequences of the ‘South Stream’ cancellation as a “lose-lose” situation. “There is a bunch of countries, which really have a security of supply problem," an anonymous EU source told Daily Mail.

"The decision shows that the outside world does have an impact on Russia, and probably a bigger one than Russia would like to admit," Vaclav Bartuska, the Czech government's ambassador for energy security, said as quoted by the Daily Mail.

Nabucco Consortium Proposes 67% Cut in Pipeline Length
Europe has several options to secure natural gas supplies to its southeastern part. Apart from the aforementioned Nabucco, there is another Turkey-to-Europe pipeline project, the Trans-Adriatic Pipeline (TAP), which will carry Azerbaijani gas through Turkey to Greece to Italy. Another option is the Krk liquefied natural gas (LNG) terminal in Croatia, which would unload tankers from the Middle East and the US. Yet another prospect is connecting Slovakia’s gas hub, which receives fuel from various sources, to Southeastern Europe via Western Ukraine.

Even in case Russia’s gas does go to Turkey, the lion’s share of it will still head for Europe, either via Nabucco or the TAP. Thus Russia’s diversion of the ‘South Stream’ may become a successful attempt at avoiding EU bureaucracy, as Gazprom will likely own the pipe, supply gas into it, and eventually sell it in Europe, effectively turning a ‘lose-lose’ into a ‘win-win’ business opportunity.