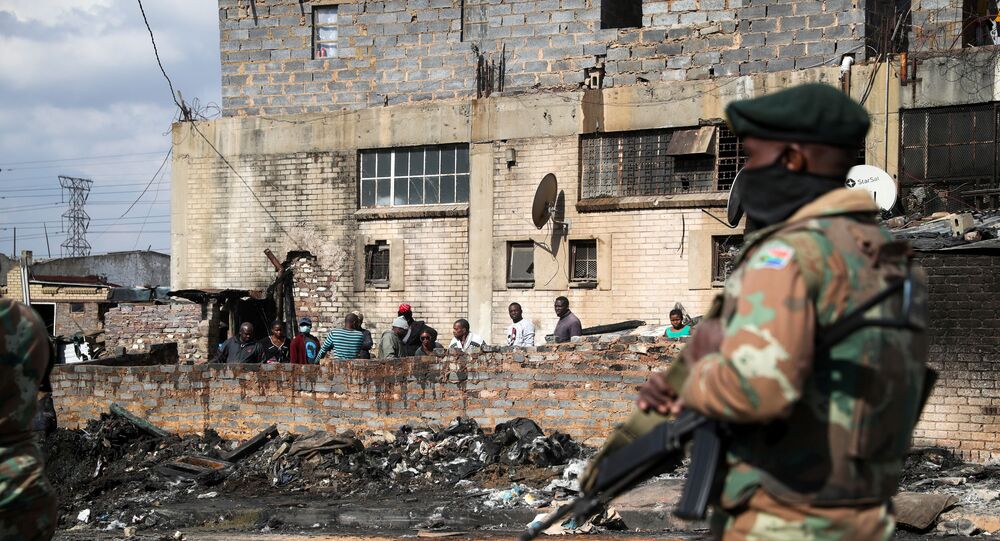 Protests broke out earlier this month after the Constitutional Court sentenced Zuma to 15 months in jail for contempt of course at the request of its own acting Chief Justice Raymond Zondo — without allowing the former president a trial in an ordinary criminal court.

South African campaigners have protested a week-long delay to bail hearings for a radio presenter charged with inciting rioting over the jailing of the former president.

SABC Ukhozi FM DJ Ngizwe Mchunu appeared at Randburg magistrate’s court on Wednesday, where he was charged with incitement to cause public violence during recent protests over the the 15-month sentence imposed on Jacob Zuma, the former president of the ruling African National Congress (ANC) and the country.

But Mchunu's bail hearing was postponed for a week until July 28 — angering supporters gathered at the court, who said the host for the state radio network was being made a "scapegoat".

The unrest has left 276 people dead as President Cyril Ramaphosa ordered 25,000 army troops onto the streets to crack down on looting of shops and burning of vehicles including dozens of goods trucks.

“This is a schedule 1 offence, under normal circumstances he was supposed to appear and be granted bail," FeesMustFall activist Bonginkosi Khanyile said. "We are dumbfounded by what happened in court and we are not happy about it”.

The National prosecuting Authority (NPA) said it would oppose bail, claiming Mchunu was a flight risk as he had left the financial capital Johannesburg by aircraft after appearing at a press conference.

“Mr Mchunu made utterances at a media briefing in Bryanston. When he heard that he was wanted, Mr Mchunu left Johannesburg in a private jet," NPA spokesman Mthumzi Mhaga said. "The utterances he made induced a sense of outrage and we know what happened," he implied.

“He has never invited anyone to commit a crime. He called out and said people must stop what they are doing. He condemned those engaged in violence," Khanyile insisted. "This is a political prosecution and he is being used as a scapegoat”.

Lungisa said he was interrogated by police intelligence and the Hawks organised crime and corruption unit on Monday for involvement in the "insurrection" — but was ultimately only charged with "contravention of COVID regulations".

"The current government has decided to recklessly characterize the protests that turned violent against the unjust arrest of President Jacob Zuma to have been an attempted coup," Lungisa wrote.

Protests broke out earlier this month after the Constitutional Court sentenced Zuma to 15 months in jail for contempt of course at the request of its own acting Chief Justice Raymond Zondo — without allowing the former president a trial in an ordinary criminal court.

Zondo filed a criminal complaint after Zuma refused to be called back to testify for a second time at the "State Capture" commission into alleged corruption that the former president himself ordered shortly before resigning at the request of the ANC national executive. Zuma's legal team asked Zondo to recuse himself on the basis that he is Zuma's brother-in-law and is biased against him. The justice testified and then ruled in his own favour as respondent — then called a tea break in the proceedings, during which Zuma and his team walked out.

The Johannesburg-based panel of senior justices is the apex court of the South African judicial system and the court of last instance for criminal convictions — giving Zuma no other body to appeal to. Critics have argued that has created a constitutional crisis.

Zuma was previously jailed under the apartheid system for ten years from 1963 to 1973 on the the notorious Robben Island prison near Cape Town for membership of the ANC's armed wing uMkhonto we Sizwe (MK). Numerous other political prisoners were held there with him, including ANC president Nelson Mandela.

© REUTERS / POOL
Former South African President Jacob Zuma sits in the dock after recess in his corruption trial in Pietermaritzburg, South Africa, May 26, 2021

Before surrendering to police, the former president told hundreds of supporters gathered at his farmstead at Nkandla in KwaZulu-Natal that he was being detained without trial, just as others had been under apartheid.

The Correctional Services Department confirmed on Wednesday that Zuma had applied for a temporary release from the Estcourt prison to attend the funeral of his younger brother Michael the following day.

Departmental spokesman Singabakho Nxumalo said only that the request for release on compassionate grounds was "being dealt with" under prison rules.