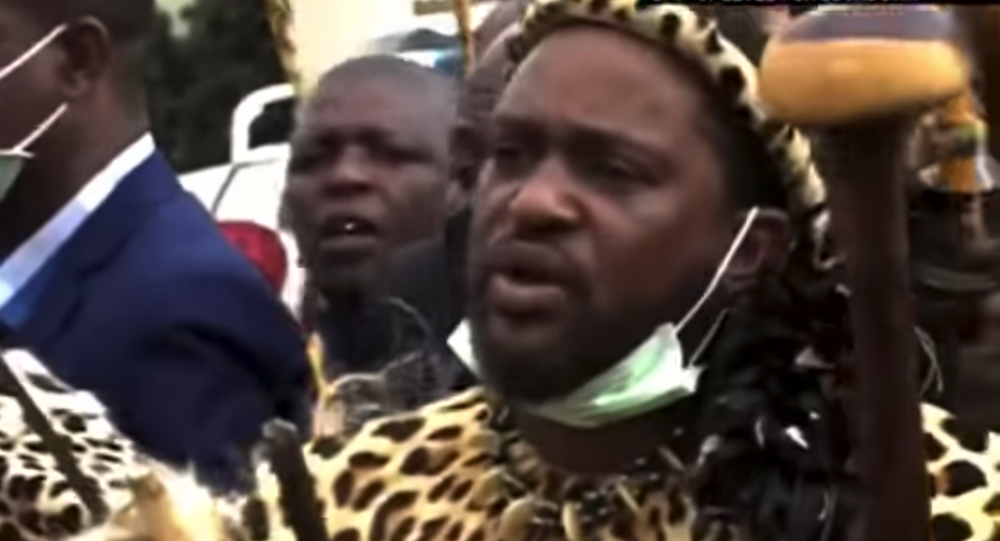 The Zulu nation recently lost both King Goodwill Zwelithini on March 12, and subsequently Queen Mantfombi on April 30. The queen was buried on Thursday evening in a private ceremony followed by a memorial. As funeral preparations were ongoing, tensions emerged among royals as to who would ascend to the throne.

Prince Misuzulu Zulu, the first son of Queen Mantfombi, was named heir during the read out of his mother’s will by advocate lawyer Madoda Madonsela on Friday.

The will reading was broadcast live and was attended by Prince Misuzulu; Prince Mangosuthu Buthelezi, the traditional prime minister of the Zulu nation; and Prince Thokozani Zulu, who recently challenged Buthelezi and the decision to crown Misuzulu as king.

Following the reading of the will, Buthelezi and Thokozani appeared to be at odds after the announcement as the broadcast showed Thokozani being confronted by Buthelezi. Prince Misuzulu’s security detail subsequently removed him hurriedly out of Kwakhangelamankengane Royal Palace.

​Since the death of his father in March, Prince Misuzulu has been sheltered at the eSwatini royal palace, the home of his late mother.

The royal drama following the death of the king has emerged as a result of the many objections raised over Prince Misuzulu taking the throne, while others have praised the announcement.

Following the chaos that took place outside of the palace during the reading of the queen’s will, media outlets have announced that a statement from the prince will be released imminently concerning the announcements of his succession to the throne.

The royal family is also facing tensions after the king’s first wife, Queen Sibongile, filed legal action asking the high court in Pietermaritzburg, South Africa, to recognize her as the only legitimate wife of Zwelithini. Prince Mbonisi and his sister Princess Thembi have also come forward with accusations that their father’s will has been forged.

No official challenge has yet been made against the appointment of Prince Misuzulu.