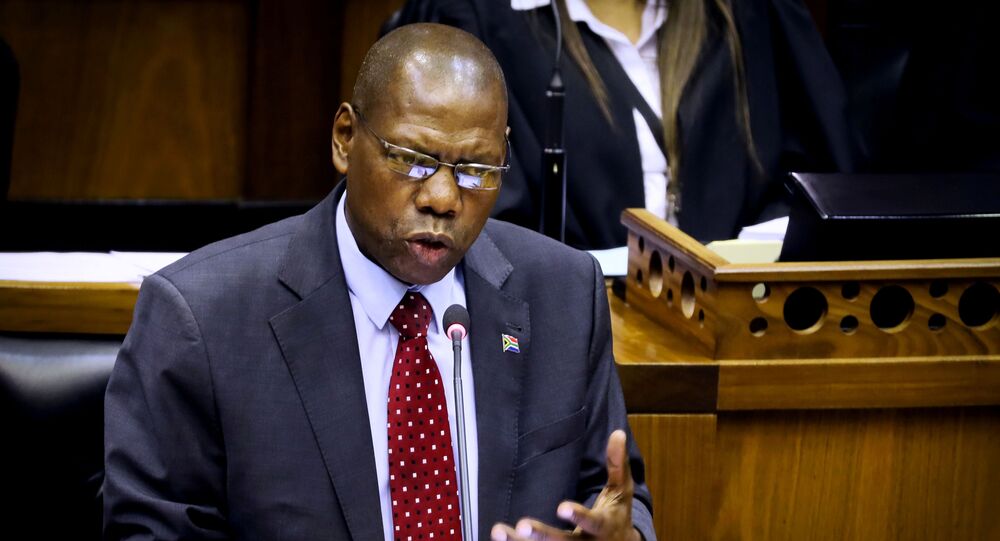 Virologist Shabir Madhi pointed out that the COVAX organisation, which the South African government relied on exclusively until recently, would only provide enough vaccines for a tenth of the population. Governing ANC-allied unions called on Health Minister Zweli Mkhize to look to Russia and China for supplies instead.

South African trade unions and top academics have laid into the government over its failure to deliver COVID-19 vaccines to Africa's hardest-hit nation.

That was after Health Minister Zweli Mkhize said on Sunday evening that the government aimed to vaccinate two-thirds of the population — some 40 million people — by the end of the year to ensure herd immunity to the deadly coronavirus strain.

He claimed the government was now negotiating directly with vaccine manufacturers, and supplies could be delivered next month, sooner than the April-June timeframe promised by the COVAX outfit whose parent organisation, Gavi, is funded by the Bill and Melinda Gates Foundation to the tune of more than $4 billion.

“We are trying to get as many vaccines to be available as possible with a target of February, although all of that is very much going to depend on the success of the current bilateral negotiations that we are having with various companies”, Mkhize said.

But the education and health union NEHAWU expressed scepticism of Mkhize’s claims on Monday, which it pointed out were "scant on details", saying he should have made deals months ago.

"Because of the delay by government to start negotiations with vaccine manufacturers and participation in the COVAX facility we are now bearing the brunt of the scarcity of vaccines and having to wait for availability while other countries have begun with the rollout", NEHAWU spokesman Khaya Xaba said.

The union demanded the government source vaccines from to fellow BRICS bloc members Russia and China, whose Sputnik V and Sinovac jabs are already in use.

"If government was committed to saving lives and stopping infections they would have moved with speed to procure the vaccine", said Xaba. "The delays prove that our government is not in touch with reality and unaware of the grave situation we find ourselves in as a country".

On Sunday the governing ANC-allied COSATU union federation, with which NEHAWU is affiliated, said Mkhize's "incomprehensible briefing" showed the government had been "caught napping in the face of a deadly pandemic".

"The presentation of this so-called COVID-19 Vaccine Rollout Strategy was only a public relations exercise at a time when the nation expects action", spokesman Sizwe Pamla said. "This is hiding the fact that there are 40 countries that have already begun immunising their people, some since December and some are South Africa’s peers in the middle-income bracket".

Russia, the UK, US, Canada, Israel, Saudi Arabia, the 27 European Union member states, and several Latin American nations have ​already begun immunising their populations with a variety of vaccines from different manufacturers. On Monday, an 82-year-old man from Oxford became the first to receive the AstraZeneca vaccine developed in the British city, while nearly a million UK residents have already had their first of two doses of the Pfizer-BioNTech vaccine.

Two professors from the University of the Witwatersrand in Johannesburg dismissed the government's goals as unrealistic, thanks to its failure to begin procurement early and its reliance on COVAX, which will only provide a fraction of the doses needed.

“The objective of vaccinating 67 percent of South Africa’s population by the end of 2021 is not achievable any more”, said Professor Alex van den Heever, a health and social security systems specialist. "And that’s largely because they only started thinking of negotiating with large pharmaceutical companies in the last 6 weeks or so when they should have begun discussions about 6 months ago”.

And virologist Professor Shabir Madhi told eNCA News that the government target was "not a strategy, it's an aspiration".

"You can only have a strategy in place in terms of targeting 67 percent of the population once you've actually secured a supply of vaccine", Madhi said. "And as the minister correctly pointed out, right now South Africa has not secured a vaccine for more than 10 percent of its population. So we see trouble".

"Companies haven't been waiting for us to come to them to procure vaccine at our convenience and on our timelines. We need to understand that there is a huge global demand".

The virologist also criticised the government's "gamble" in relying exclusively on COVAX until recently.

"Knowing that the COVAX facility itself has indicated that it would only be able to supply vaccine for up to 20 percent of the population — and we're going at 10 percent because of the cost of being involved in the COVAX facility — we did not enter into bilateral agreements with other companies", Madhi said.

He also dismissed government claims that developed nations had taken a financial risk by ordering then-unproven vaccines from drug firms, pointing out that "advanced market commitment" contracts did not oblige them to pay until the product was delivered.

© Sputnik / Алексей Дружинин
BRICS Member South Africa May Not Get Vaccines From Bill Gates-Funded COVAX Until June
South Africa reportedly paid 327 million rand ($22 million) to COVAX just before Christmas as a 15 percent down-payment on a 2.2 billion rand ($150 million) fee to the organisation.

Swiss and US-based COVAX, which claims to have 187 countries on board so far, is not developing or producing a vaccine of its own, and has so far not procured supplies for any of its members.

The organisation claims it wants to ensure vaccines are distributed "fairly and equitably" to poorer nations, and that healthcare workers are inoculated before other citizens. South African President Cyril Ramaphosa admitted on Tuesday that COVAX would not deliver any vaccines until the "second quarter" of 2021 — in other words, somewhere between April and the end of June.

The pandemic has now claimed almost 30,000 lives in South Africa, with over 1.1 million residents testing positive for the virus since Mkhize announced the first case on 5 March 2020.