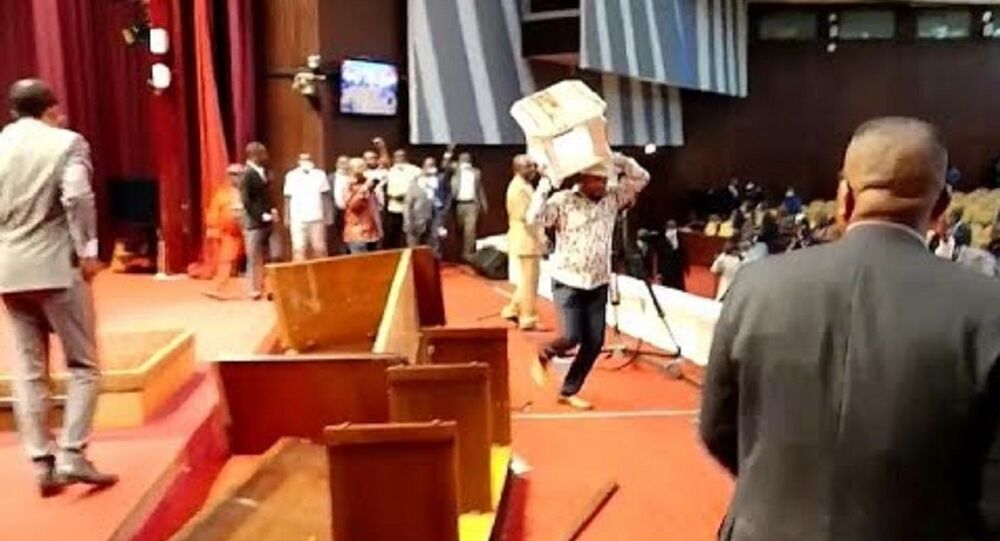 On Sunday, Democratic Republic of Congo President Felix Tshisekedi dissolved the ruling coalition and said that forming a new bloc might require the dissolution of parliament and fresh elections. His coalition partners blasted the move as unconstitutional.

Police entered the parliament building in the DR Congo capital of Kinshasa on Tuesday amid reports of renewed unrest and violence inside the legislative chamber, AFP has reported, citing one of its journalists.

At least one person was said to have been injured in clashes involving the throwing of items inside the chamber between supporters of President Tshisekedi and lawmakers from the parliamentary majority loyal to his predecessor, Joseph Kabila.

The United Nations Security Council expressed concern about the political crisis brewing in the Central African nation last week, pointing to the imminent collapse of the ruling coalition over policy disagreements.

UN Secretary-General Antonio Guterres warned that the coalition's collapse "could undermine the fragile political stability" in the country, "reverse the gains made since the 2018 elections and the resulting peaceful transfer of power, as well as divert efforts to address security challenges" in the country's instability-prone east.

DRC UN envoy Leila Zerrougui confirmed to the Security Council on Monday that her country was "going through a period of heightened political tension, compounded by persistent disagreements among members of the ruling coalition."

Tshisekedi announced plans to form a new coalition government on Sunday, with parliament to be dissolved and fresh elections called if he could not forge a new one. Tshisekedi's erstwhile coalition partners, the Common Front for the Congo (FCC), loyalists of former president Kabila, who led the country between 2001 and 2019, enjoy a majority of 305 of the parliament's 500 total seats, and called his decision a "flagrant and intentional breach of the constitution." The FCC also controls 90 of the 109 seats in the senate, and the governorships of nearly all of the DRC's 26 provinces.

Tshisekedi reportedly complained about the extent of his administration's disagreements within the shaky coalition in October, citing clashing views on issues ranging from national security policy to elections, the independence of the judiciary and the management of state assets. In his address on the scrapping of the coalition on Sunday, the president accused the FCC of preventing him from doing "what I was elected for."

© Photo : Africa Museum
Belgian Museum to Return Artefacts Taken From Congo by 'Pretty Brutal' King
The DRC is one of Africa's largest and most populous countries, and highly rich in natural resources, which has made the former Belgian colony prone to political instability and strife throughout much of the past century, sometimes sparked or intensified by foreign interests.

The African Union weighed in on the political crisis in the country over the weekend, calling on all sides to "work resolutely and sincerely for national harmony and to preserve peace and stability."

The UN maintains a 15,000-troop'contingent of peacekeepers in the nation, with their mandate expected to run out on 20 December. The mission was formed in 1999 in the aftermath of the Second Congo War, an extremely bloody five-year-long conflict estimated to have directly claimed the lives of up to 350,000 people and caused an additional 2.7 million to 5.4 million deaths].

The country continues to be plagued by instabillity, with militias operating in the DRC's east engaging in inter-communal violence and attacks on civilians.