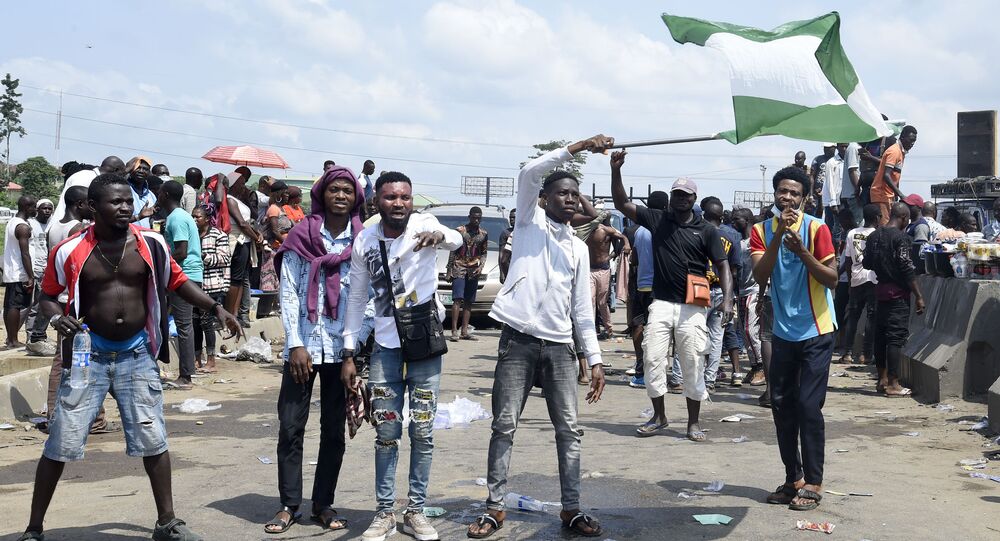 On Tuesday night, unidentified armed men started shooting protesters after the authorities in Lagos State imposed a 24-hour curfew in a bid to curb criminal activities under the guise of ongoing protests against police violence.

Amid the reported killings, protests in the city of Lagos intensified with people starting to set things on fire. Among them is a major Nigerian TV station, TVC, linked to one of the ruling party's top politicians.

TVC managing director Andrew Hanlon was quoted by AFP as saying that "hoodlums" had attacked the station with petrol bombs and that its main building was an "inferno".

TVC attack
The station in #lagos set on fire pic.twitter.com/eLcfz5CZDJ

​At the same time, according to Reuters, smoke was seen rising from the direction of the Lekki toll gate, a site where soldiers had opened fire on protesters late on Tuesday.

The End Special Anti-Robbery Squad (End SARS) or #EndSARS rallies across Nigeria started after a number of allegations were made that the country's SARS police unit was responsible for acts of killing, torture and blackmail.

The department was disbanded by the authorities and replaced with the Special Weapons And Tactics (SWAT) squad. Nevertheless, the rallies went ahead protesting against other forms of police violence.

The military reportedly started shooting protesters on Tuesday night after the authorities in Lagos State imposed a 24-hour curfew in a bid to curb criminal activities under the pretence of ongoing protests against police violence.

The exact death toll from the shooting is not yet known, with sources reporting anything from seven to nine fatalities, and predicting that the figure could rise as many other protesters are injured and subsequently hospitalised in the shooting.