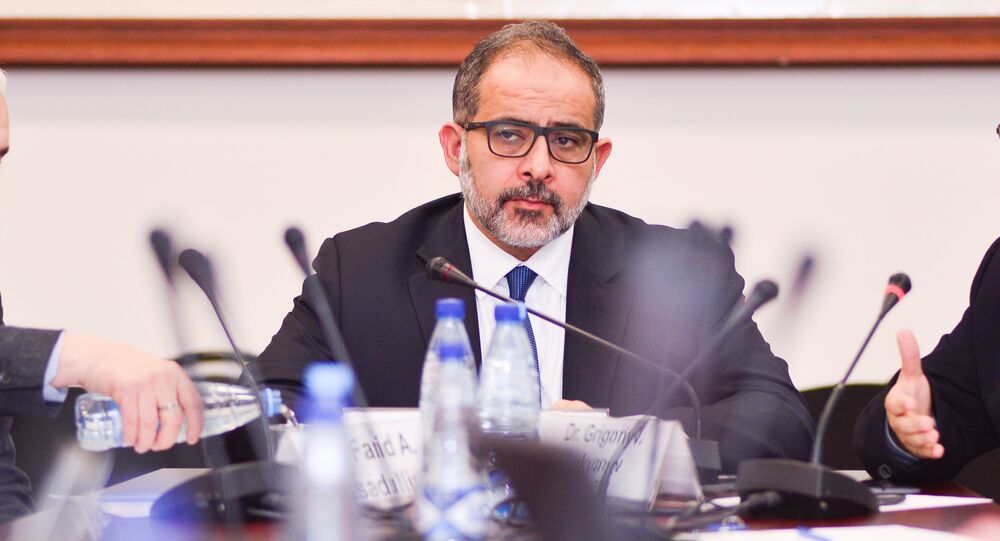 MOSCOW (Sputnik) Valentina Shvartsman - The continuous protraction of picking a new UN envoy to Libya is jeopardizing the war-torn country's prospects for peace and gets increasingly politicized, Aref Ali Nayed, the special envoy of the Libyan House of Representatives to the US, the United Kingdom, the European Union and African Union, said.

The position of the UN special envoy for Libya has been vacant since March when former envoy Ghassan Salame resigned over frustration with the deadlocked peace process. US diplomat Stephanie Williams is currently heading the UN Support Mission in Libya in an acting capacity.

"The delay in appointing a UN Special Envoy is deeply hurtful to Libya’s prospects for peace and stability. This appointment should be a purely professional and technocratic decision by [UN] Secretary General [Antonio Guterres] himself. Unfortunately, it has become the domain of international politics and intrigues," Nayed said.

Commenting on candidacy preferences, the diplomat said "As Africans, we welcome the appointment of an African expert."

"Just as we believe the Arab League and the Arab mutual defense agreements should be operationalized urgently. Perhaps the decision of the Egyptian Parliament to support Libya's sovereignty and independence will lead to more Arab and African commitments," Nayed said.

Since the onset of Libya's political disarray in 2011, the oil-rich country got practically split into a duopoly. The internationally-recognized GNA has established itself as the power pole in the country's west with headquarters in Tripoli, while the rival House of Representatives and the LNA took control over the east with the center in Tobruk.

Following a failed offensive on Tripoli last year, the LNA forces attempted a rematch and the GNA launched a counteroffensive this past April. Despite continuous international mediation, as well as numerous calls by international actors upon the Libyan warring parties to cease fire during the pandemic, armed confrontation has continued.

Turkey has deployed nearly 16,000 fighters to Libya, including members of al-Qaeda and ISIS (terrorist organizations, both banned in Russia), and has asserted control over the country's sovereign resources, Aref Ali Nayed said.

"The fact of the matter is Turkey used the illegal invitation (with no Parliamentarian approval) by the GNA in order to do two existentially threatening things. Firstly, Turkey exported nearly 16,000 fighters, many of whom are Qaeda and ISIS members, into Libya. Secondly, Turkey asserted total hegemony over Libya and its resources in very arrogant announcements and speeches by its Defense Minister and other officials," Nayed said.

Turkey has been providing extensive military support to Libya's Tripoli-based Government of National Accord (GNA) since the latter requested assistance in late 2019 in a power confrontation against the House of Representatives and forces of the Libyan National Army. Ankara is also reportedly planning to establish two permanent military bases in Libya as part of its continued aid to the GNA.

The Tobruk-based Libyan House of the Representatives has been left with no option but ask for Egypt's intervention in the ongoing conflict due to Turkey's backing of the rival Tripoli-based Government of National Accord (GNA), Aref Ali Nayed said.

"The prospects of a major conflict between Egypt and Turkey on Libyan territory are no small matter and are now quite real. The Libyan Parliament and our most respected tribal elders and social fabric leaders went to Egypt and asked for direct Egyptian intervention not because they want war, but because they want peace," Nayed said.

The official noted that the speech, delivered by Turkish Defence Minister Hulusi Akar in Tripoli earlier this month, was perceived by Libya's eastern-based authorities as proof that they were dealing with "a neo-Ottoman full occupation."

"That is why Libya’s Parliament and its Social Fabric are all united in seeking direct Egyptian intervention against Turkish occupation. This is of course very dangerous, but Turkish arrogant aggression left us no other choice," Nayed said.

Libya is currently split between two rival administrations, the UN-recognized GNA, backed by Turkey, and the Tobruk-based parliament, supported by the Libyan National Army.

Last week, the Tobruk-based parliament gave permission to the Egyptian forces to intervene in Libya should Cairo see grounds for a preemptive strike against an imminent security threat to the national security of both states. The Egyptian parliament greenlighted possible dispatch of the country's forces on Monday.