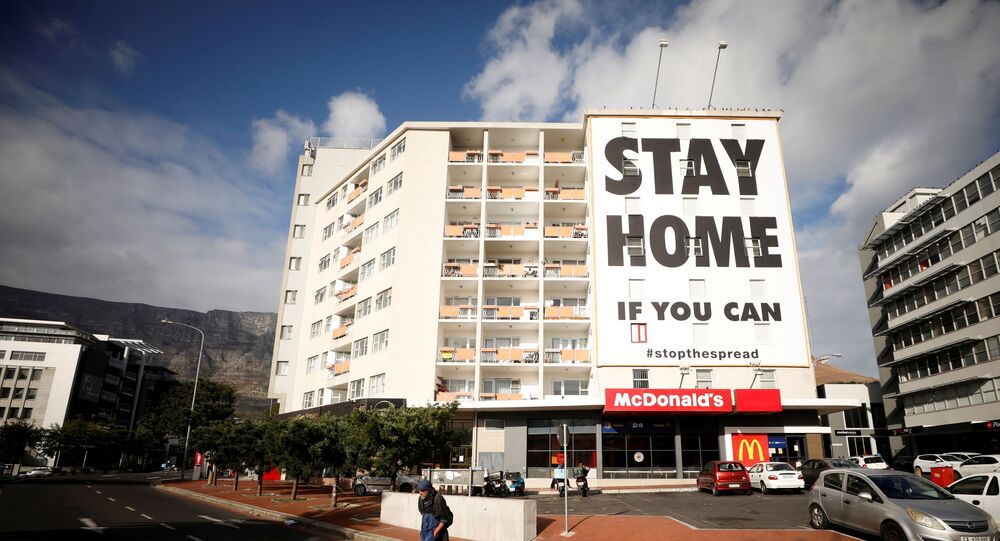 Afrikaner Minority Town Representative: 'We’re 100% COVID-Free and We Hope to Remain So'

People in the “Afrikaner-only” community of Kleinfontein outside of Pretoria are taking precautions amid the coronavirus pandemic, suspending public activities and beefing up security at the town's guarded perimeter.

Up until mid-March this year, Kleinfontein had a variety of activities happening on its premises. Construction workers were busy erecting new buildings, while locals were participating in a rodeo and preparing for another game of jukskei – a 270-year-old sport that was developed in South Africa.

Now, with the growing number of COVID-19 cases, which according to the country’s Department of Health has reached 1,655 nationwide, these plans have had to change and there are some who have already been feeling the weight of the restrictive measures on the community.

"A lot of the construction workers – what they earn in a day, goes into their daily meal", says Dannie de Beer, who is one of Kleinfontein’s directors – "the elders of the tribe" who govern the town. "And now they are not allowed to work, and not all employers are able to pay them in advance. So there was a real need there. As a community that is integrated, we immediately started emergency measures – an emergency fund. From that emergency fund, we are putting together food parcels for those most in need".

The town, which was founded 30 years ago near a monument commemorating the 1900 battle of Diamond Hill 30 kilometres away from Pretoria, is now home to over 1,600 Boer and Afrikaner people. These white minority groups have been under a lot of pressure in South Africa in recent years, with radical organisations, such as the Economic Freedom Fighters (EFF) targeting their land and criminals attacking the white farmers physically. The hardships, however, have now been overshadowed by the growing threat of the coronavirus pandemic:

"It is a new experience for us", says de Beer. "Our forefathers have experienced the 1918 flu, we have a memory of that. But it’s difficult for everyone, it’s especially difficult on the poor and elderly that are dependent on services and products. But our community is a homogeneous community. We take all the precautions that we can. We are taking social distancing very seriously. We are limiting movement. We are also selectively issuing permits. So, everybody is pretty much staying at home, abiding by the law, and hoping that the rest of South Africa will do the same".

​According to de Beer, there are currently no registered COVID-19 cases in Kleinfontein, and practical measures have been implemented to prevent the virus from breaching the perimeter:

"We’re currently COVID-free and we hope to remain so. We are taking the practical side of social distancing very, very seriously, limiting [the number of] passengers in vehicles, limiting travel to absolutely necessary. We’re adopting a practice of one person collecting food for 10 people, which is then properly sanitised, as a measure, rather than 10 people running the risk of being exposed".

Despite doctors and nurses living on-site, Kleinfontein doesn’t have its own medical facilities, so its residents, including those living in the local retirement home, will have to rely on help from the government should the need for coronavirus testing or hospitalisations arise. According to de Beer, there’s not much certainty whether such help will be available soon:

"We’re very much unsure about it. It seems that the government has its own agenda in terms of who gets tested, and who doesn’t. We don’t know as a community whether we’re at the end of the list or the middle of the list".

Kleinfontein is an 800-hectare private property with its own residential area, a school and a kindergarten where classes are taught in the Afrikaans language, a shop, and a bank, as well as a restaurant, a home for the elderly, and a town hall. Its perimeter is guarded around the clock. Every application to settle in Kleinfontein is evaluated by a selection committee, with culture, language, religion, and Afrikaner heritage being among the deciding factors. Work and contracts are exclusively awarded to those upholding and abiding by the vision of a self-reliant Afrikaner cultural town.