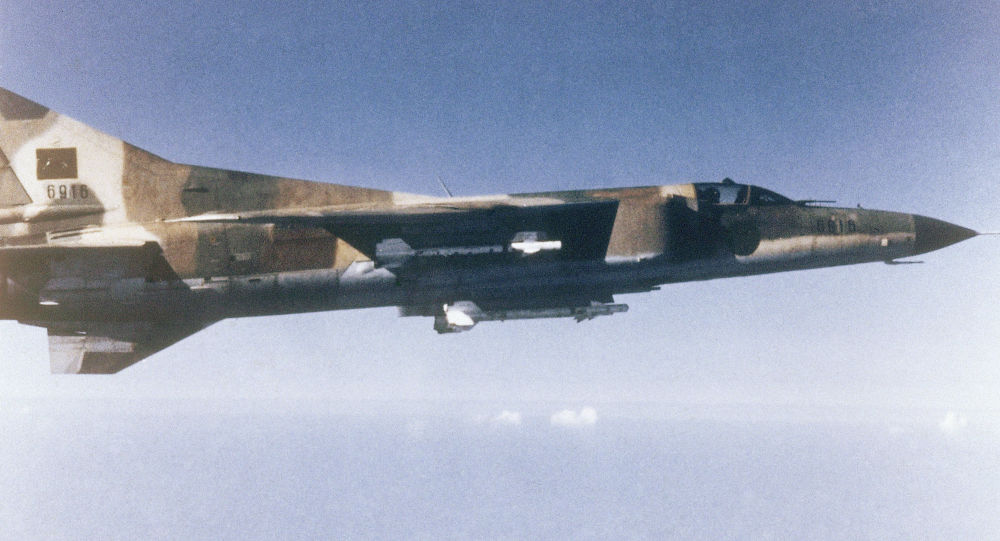 BENGHAZI, Libya (Sputnik) - The Libyan National Army (LNA) has confirmed that its fighter jet crashed within the Government of National Accord's (GNA) territory after completing its combat mission and that the reason behind the crash was a technical malfunction, according to a statement by the LNA general headquarters obtained by Sputnik.

"The LNA's general headquarters lost touch with one of the MiG-23 jets on Saturday evening after it had completed its combat mission ... Soon after the pilot was captured by terrorists in the city of Zawiyah", the LNA said in a statement.

It stressed that the reason behind the crash was a technical malfunction, which made the pilot catapult himself while still being beyond the enemy lines. The statement also specified that the captured pilot was being treated poorly in violation of the Geneva convention.

© CC BY-SA 2.0 / Rob Schleiffert / MiG-23
Libya's Mitiga Airport Suspends Air Traffic Following Shelling - Airport Authority
According to the LNA, the command asked the elders of the Zawiyah tribe to interfere after video and photo evidence of the pilot's maltreatment had surfaced on the internet.

The GNA operations command tweeted on 7 December that a MiG-23 jet of the National Libyan Army had been shot down near the Yarmouk military camp, south of Tripoli.

Libya is currently ruled by two competing governments. The country’s east is controlled by the Interim Libyan Government of Eastern Libya, supported by the Libyan National Army, led by Khalifa Haftar, and its west is governed by the UN-backed Government of National Accord. Since April, the sides have been engaged in an open military confrontation.