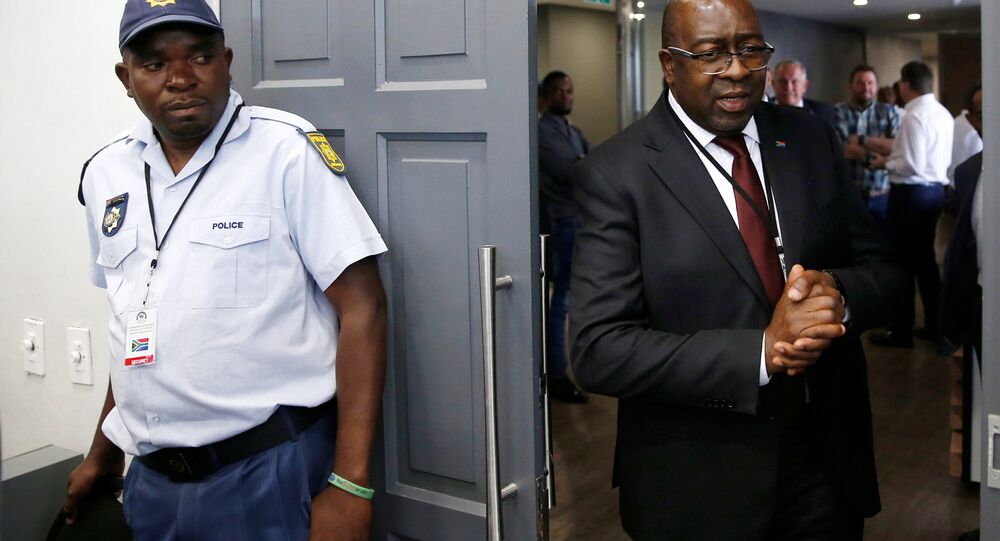 South Africa's Finance Minister Nhlanhla Nene has been giving damning evidence at the country's State Capture Inquiry. The inquiry heard about a $100 billion deal with Russia for nuclear power stations.

Mr. Nene told the inquiry on Wednesday that he was fired by former President Jacob Zuma for refusing to support the deal with Russia in 2015.

He said he was completely excluded from key discussions by Zuma, who has also been accused of handing over government contracts to a wealthy family of businessmen called the Guptas.

Zuma, who finally stepped down as President in February after losing the support of the ruling African National Congress (ANC), has repeatedly denied he pushed for a deal with President Vladimir Putin at a summit of BRICS (Brazil, Russia, India, China and South Africa) countries.

I asked #NhlanhlaNene to respond to accusations that he lied when he told @eNCA that he’d had no engagements with the Guptas.
Watch his answer here:
“I have no response to that one”https://t.co/gGYwfGwAbu

Opposition politicians and investigative journalists say the deal would have included huge kickbacks for Zuma and the Gupta family.

The Indian-born brothers — Ajay, Atul and Rajesh — have been accused of using their ties with Zuma to siphon off millions of dollars in state funds. It is also claimed they had an unhealthy level of influence on cabinet appointments.

What Is State Capture?

The corruption scandal surrounding the Guptas is dubbed "state capture" in South Africa because of the degree to which President Zuma's government was allegedly beholden to the family.

Mr. Nene was sacked in December 2015 in a move which shocked foreign investors who rated him highly.

He was brought back as finance minister earlier this year by the new President, Cyril Ramaphosa, who has promised to stamp out graft and revive the South African economy.

"I do believe that I was removed from office due to my refusal to toe the line in relation to certain projects," Mr. Nene told the judicial inquiry into state corruption.

Nene describing how then President Zuma fired him (in isizulu).
He says Zuma asked him if he recalled that he said SA would need to send a senior official to the Africa Regional Centre (BRICS).
“We discussed this matter with the Top 6 and we agreed we should put you there”.

"Those projects may have benefited the Gupta family and other close associates of the then president… for instance the nuclear deal and the SAA (South African Airways) strategy," he added.

Mr. Nene said his deputy Mcebisi Jonas was offered his job after he refused to back the nuclear power deal.

Mr. Jonas told the state capture inquiry in August he had been offered 600 million rand (US$40 million) by the Guptas if he agreed to take the finance minister job and follow their agenda.

He said he turned the offer down and claimed Ajay Gupta threatened to kill him if he reported the bribe offer to the authorities.

The Guptas left South Africa earlier this year and the authorities in Pretoria are seeking their extradition from India to face prosecution.

I’m not sure why so many cheerleaders are lauding Nhlanhla Nene’s testimony. He is being congratulated for not signing off on total insanity. But he met the former president’s mafia benefactors EIGHT times. The political culture is broken in this country.

Mr. Nene said Zuma was furious with him when he refused to sign a guarantee letter which the President wanted to present to Putin while in Russia.

"It was a very tense meeting that ended with us just being instructed by the president to go and find a solution, which we didn't find. I told the president in the meeting that I could not sign the letter without having first interrogated the financial and fiscal implications," Mr. Nene told the inquiry.

Mr. Nene said he had also angered Zuma when he rejected a proposed SAA route to Sudan because he said it was not commercially viable.