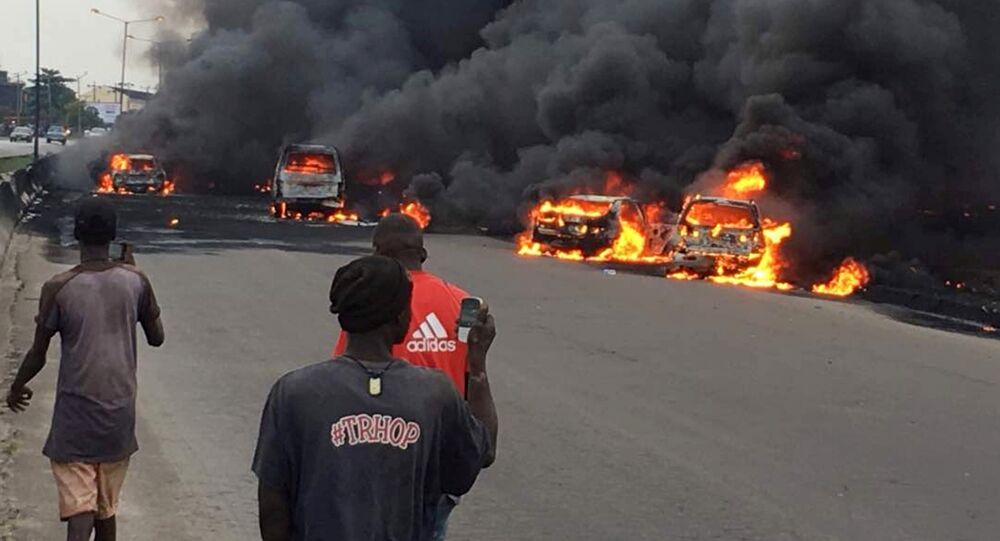 More than 54 vehicles have been destroyed by a fire trapping drivers on the Lagos-Ibadan Expressway, according to Federal Road Safety Corps.

An oil tanker exploded during rush hour on a busy expressway in Nigeria on June 28, setting cars on fire, killing at least nine people and injuring at least five, officials said.

The fuel tanker, five buses, two trucks, one tricycle, and about 45 cars have been burnt in the flames, Kazeem noted.

Sad about the Tanker Fire disaster at #Otedola Bridge. May God comfort the family of the victims and heal Nigeria. #PrayForNigeria#NigeriaMourn pic.twitter.com/DyZO1OKwgP

"The registration numbers of the affected vehicles could not be ascertained, as all the vehicles were burnt," Kazeem said.

Many feared dead in a tanker explosion at Otedola, along de Lagos-Ibadan expressway in Nigeria.Vehicles were reportedly trapped in traffic.Commuters were feared to be trapped in their cars and killed in the blaze,while many others sustained fire burns 💔 #nigeria #prayfornigeria pic.twitter.com/RX85YgPtEj

President Muhammadu Buhari has commented on the incident, saying that it was one of the greatest tragedies witnessed in the country in recent times.

BREAKING VIDEO!!!
MORE THAN 20 CARS BURNT WITH PEOPLE INSIDE IN NIGERIA…

My Heartfelt condolences to those families whose loved ones Died in the horrific Fire at Otedola, Lagos in Nigeria.
I Pray for Nigeria #ENGBEL#Gainwithxtiandela pic.twitter.com/JaVIEMt0b7

Last October, 20 cars and four motorcycles were burned when petroleum was spilled on a busy road by a tanker.