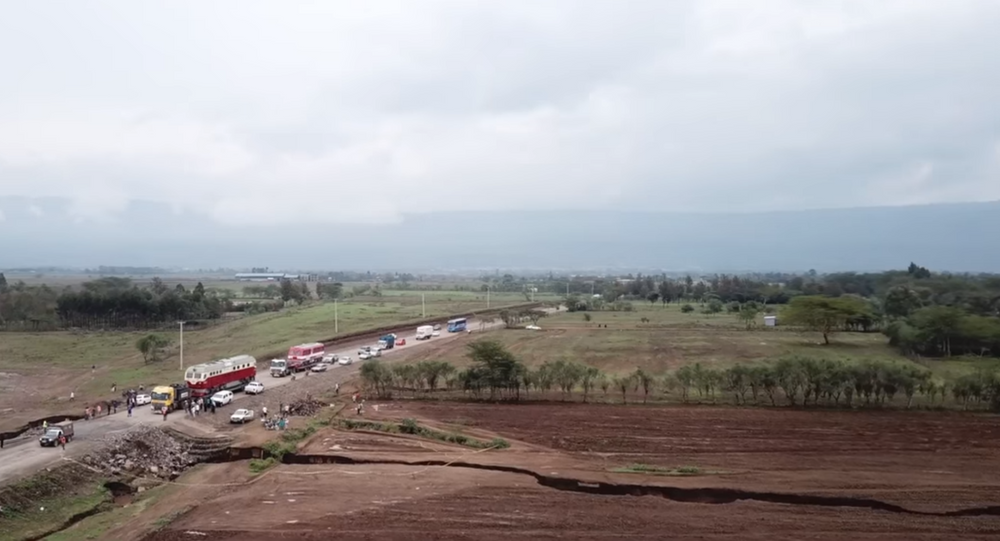 Overnight on Monday, a 20-meter-crack in the Earth emerged in an area west of the Kenyan capital of Nairobi. The opening of the mysterious crack, which is continuing to grow, shook the ground in the area and caused part of the Nairobi-Narok highway to collapse.

The Nubian tectonic plate covers almost the entire African continent while the Somali plate includes half of the coast coast of Africa, from the Gulf of Aden in the north to Durban, South Africa, in the south. These two plates are pulling away from each other at a rate of about 2.5 cm a year on average. This means that the shifting process could cause Africa to split in two — though not for some 50 million years — resulting in Somalia, Kenya, Tanzania and half of Ethiopia moving away from the rest of the continent. These countries are located in an area referred to by geologists as the Great Rift Valley.

The current rift appears to be in the general area of the border of the the Nubian and Somali plates.

Other geologists, however, like Wendy Bohon, have far less world-shattering explanations: she believes the crack was created simply by heavy rains.

"I think it's an Earth fissure, the same sort of thing that you see in Arizona after heavy rain storms. They're the result of heavier torrential rains that come and wash away large portions of the dirt in the ground. To me it looks pretty cut and dry. It wasn't a result of the tectonics, it was the result of the weather," Bohon told CBS News.

The outermost part of the Earth, called the lithosphere, is made up of tectonic plates that drift along the surface at different speeds. When they collide or separate, they cause earthquakes; over time, the same processes form rifts, ridges, mountains and chasms. Scientists believe these plates slide slowly across the liquid surface of the Earth's mantle, which is made of ultra-hot liquid rock beginning around 80 to 190 kilometers beneath the surface.

At Least 2 Kiled, 115 Injured as a Result of Strong Earthquake That Hit Taiwan