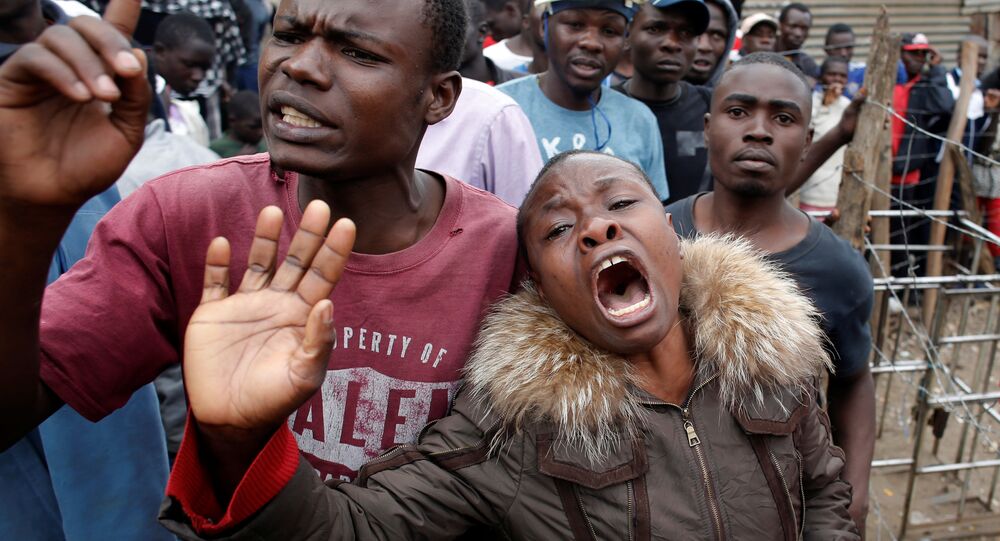 Kenya's opposition leader, Raila Odinga, has rejected the preliminary results of the presidential election. The initial results show President Uhuru Kenyatta on his way to being re-elected by a comfortable margin.

There are fears that if the result is not accepted by certain tribes there could be a repeat of the riots in 2007 in which thousands were killed.

The fraud Jubilee has perpetuated on Kenyans surpasses any level of voter theft in our country's history. This time we caught them.

​Mr. Kenyatta, 55, is the son of Kenya's first president, Jomo Kenyatta, but under his rule the country has become mired in corruption, the economy has sagged and it has been unable to stop persistent terrorist attacks.

Raila Odinga, 72, who is from the Luo tribe, has tried and failed several times to be elected president.

FAKE NEWS ALERT:
We have not announced any plans to declare the winner of the Presidential Election Tonight. Ignore circulating SMS

​Hundreds were forced to flee and it was months before the violence stopped.

Much of the violence in 2007 was between Kikuyus and Kalenjin tribesmen, but in 2013 Mr. Kenyatta appointed a prominent, Kalenjin, William Ruto, as deputy president in a bid to gain the support of his tribe.

Polling data published on the Independent Electoral and Boundaries Commission (IEBC) website says that with 95 percent of results in, Mr. Kenyatta is leading with 54.3 percent to Mr. Odinga's National Super Alliance (NASA) on 44.8 percent.

#KenyaDecides Update 15 NASA appears to have released what is considers to be the real presidential results. pic.twitter.com/g7EtINSj14

​There are huge variations between different Kenyan counties.

In marked contrast to Mr. Kenyatta's silence on social media, Mr. Odinga has tweeted repeatedly, claiming the election is a fraud perpetuated by Mr. Kenyatta's party.

We know some persons gained entry into the IEBC Election Management Database & took over the mandate of Kenyans to choose leaders.

​He also posted computer logs on his Facebook page which he claimed "proved" the Jubilee Party had hacked into the IEBC's computers and changed election results.

Earlier in August, Chris Msando, who was in charge of the electronic voting systems at the IEBC, was murdered along with a young woman he had been dating.

Presidential agents have been given access to all polling station results ie Forms 34A's, as they are uploaded and a public access link made

​​Mr. Msando, who was in charge of the system, had reported several death threats before he was murdered.

He went missing on July 28 and his Land Rover Discovery was found abandoned in the Nairobi suburb of Roysambu.

His body, stripped to his underwear, was found on July 30 and identified the following day. His left arm had been broken and he had been tortured before being killed.

The naked body of a 21-year-old woman, Carol Ngumbu, who he is understood to have been dating, was also found alongside him.

Well done Conseslus Kipruto for winning the 3,000m Steeplechase. Proud of you. #London2017

One of Africa's 'Most Open' Countries: Why Kenya Election Is a Big Deal Globally