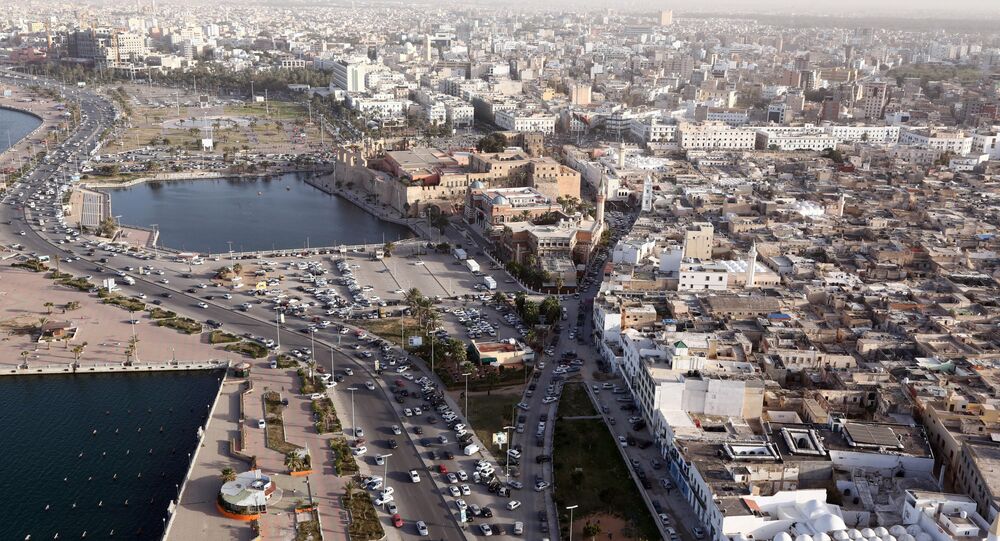 On Saturday, UN Secretary General Antonio Guterres called on the parties to the Libyan crisis to restore calm after Thursday's deadly attack on the Brak al-Shati military airbase in country's south and resume the dialogue on the settlement of the crisis. Libyan politicians told Sputnik who might be interested in the instability in the country.

© AP Photo / Mohammed el-Shaiky, File
From Civil War to Civil Rule: Libya's Army, PM Take Steps Towards National Unity
"The Secretary-General [Guterres] is deeply concerned about the military escalation at the Brak al-Shati air base in southern Libya and calls on all parties to exercise restraint and restore calm. He is particularly disturbed by the high number of fatalities as well as reports of summary executions of civilians, which, if confirmed, may constitute war crimes. The continued insecurity in Libya is a reminder that there is no military solution. The Secretary General therefore urges all key Libyan stakeholders to re-commit to the political dialogue and engage constructively towards that goal," Stephane Dujarric, spokesman for Guterres said in a statement published on Saturday.

On Thursday, a deadly attack on the Brak al-Shati military airbase in country's south killed at least 141 people, mostly soldiers loyal to General's Khalifa Haftar's Libyan National Army (LNA). The servicemen were returning from the military parade and were unarmed.

On Tuesday, thousands of LNA troops paraded in Tocra, 40 miles (65 km) northeast of Benghazi, in front of Haftar, other LNA commanders and senior politicians from the eastern government and parliament. Tanks, Grad rocket launchers, helicopters and fighter jets were also displayed.

The parade marked the third anniversary of Khalifa Haftar's campaign to control Libya's second most populous city of Benghazi.

Media reports on Friday suggested that members of the Third Force militia loyal to the rivaling UN-backed Government of National Accord (GNA) in Tripoli had carried out summary executions during Thursday's assault.

© Sputnik / Andrei Stenin
Death Toll From Libya Airbase Attack Rises to 140, Defense Chief Suspended
The victims also included civilians who worked at the Brak al-Shati airbase or were in the nearby area.

The GNA denied ordering the attack, which it condemned, and said it had set up a commission of inquiry to investigate the allegations.

Mahdi al-Barghathi, the GNA's defense minister, was suspended, pending an outcome of the probe. Jamal al-Treiki, the head of GNA's Third Force militia, which was accused of carrying out the attack, was also suspended.

Aguila Saleh, the speaker of the Tobruk-based parliament in eastern Libya, accused the GNA's Third Force of a "serious breach" of a truce agreement reached between Haftar and Fayez al-Sarraj, head of the Tripoli-based GNA, in Abu Dhabi on May 2.

The two leaders then agreed to hold snap presidential and general elections within six months, as well as to create a new ruling structure, namely, a presidential state council, which would facilitate a peaceful settlement of the Libyan crisis.

International powers had for months been pushing the two men to discuss resetting a UN-mediated agreement which led to the creation of Sarraj's Government of National Accord (GNA) in late 2015.

© AP Photo / Mohammad Hannon
Putin Says Hope Exists for Restoring Peace in Libya, Russia Ready to Help
Commenting on the new spiral of the Libyan crisis, the country's politicians told Sputnik Arabic that there are many forces who are not interested in the peaceful settlement of the crisis in this North African country.

"Their main task is to recover the money they invested into the country. It worries them more that the actual settlement of the crisis. The international community has not worked out any plan on the stabilization of the situation," he elaborated.

Abu Bakr Baeer also suggested that those forces who disrupt the peace process and create tensions are acting in the interests of certain world powers.

Meanwhile, Libyan political analyst Mukhtar al Jidal told Sputnik that it is Qatar and Turkey who would continue foiling the agreements between GNA and LNA in order to bring to power the Libyan Muslim Brotherhood.

He said that the German and French intelligence services have done a huge job on tainting the reputation of GNA among ordinary Libyans.

The western services, he said, have been spreading rumors that GNA is financing and arming various armed groups in the country.