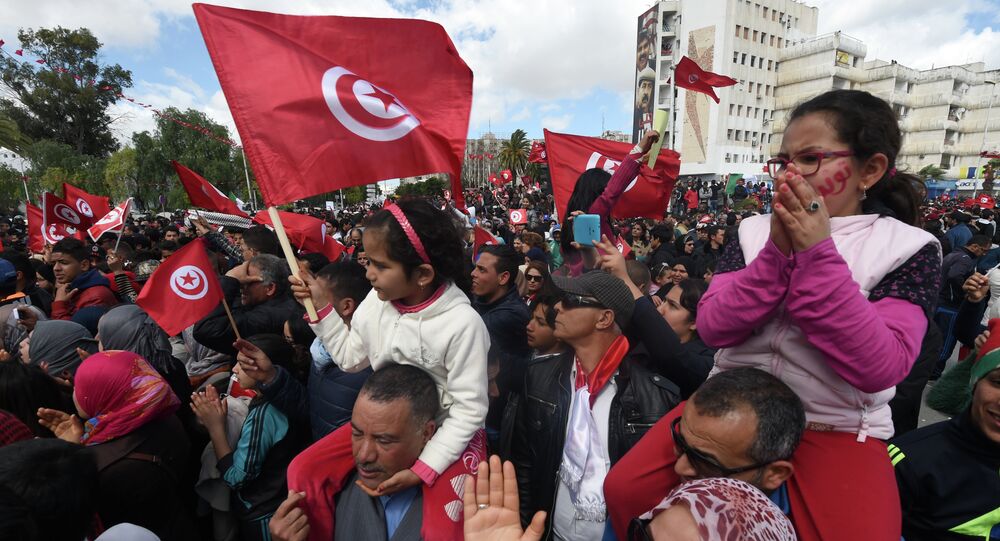 Thousands Rally Against Terrorism in Tunis After Bardo Museum Attack

Thousands of demonstrators gathered in the capital of Tunisia for a rally to show solidarity against terrorism following Bardo museum deadly attack, the BBC said on Sunday.

Tunis Museum Terrorists Trained at Camps in Libya
MOSCOW (Sputnik) – The rally follows the March 18 attack on National Bardo Museum in Tunis that resulted in death of at least 21 foreigners.

French President Francois Hollande, Italian Prime Minister Matteo Renzi and other foreign officials joined thousands of Tunisians taken to the streets and chanting "Tunisia is free! Terrorism out!" the BBC said. The world leaders also attended a ceremony at the Bardo museum where a stone tablet was dedicated to the memory of the attack victims.

Earlier this day, Tunisian authorities claimed to have killed nine militants, including alleged leader of the Bardo attack, Lokman Abu Sakhra, during a raid in the southern Tunisian region of Gafsa late on Saturday, according to the BBC.

The Islamic State (ISIL) militant group, which is mostly active in Syria and Iraq, claimed responsibility for Bardo museum atrocities.

Up to 3,000 Tunisians are estimated to be fighting alongside Islamists in Iraq and Syria, the International Centre for the Study of Radicalisation and Political Violence says.

Tunisian Forces Kill 9 Suspected of Being Behind Deadly Museum Attack

Leader of Terrorists Behind Bardo Museum Attack Arrested in Tunisia