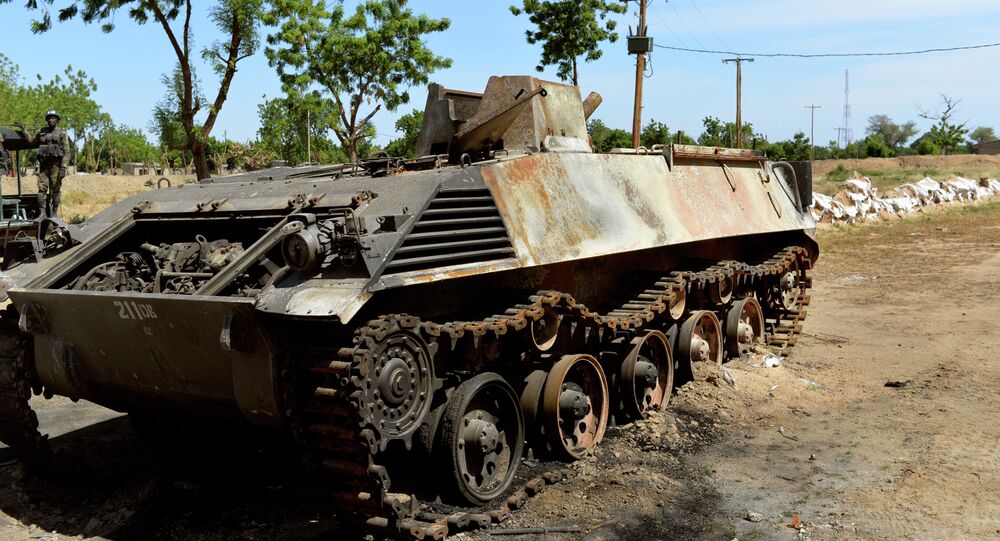 Amnesty International said that Boko Haram militants have killed a woman as she gave birth during last week’s attack, which is thought to have been the largest and deadliest Boko Haram assault so far.

MOSCOW, January 15 (Sputnik) — The woman was killed by indiscriminate fire, with an unnamed witness saying that "half of the baby boy (was) out and she died like this," Amnesty International said, according to the AFP news agency.

© AP Photo
Shocking Images of Boko Haram Devastation in Nigeria Released
Amnesty International quoted other witnesses as suggesting that hundreds of people were killed during the Boko Haram offensive in the towns of Baga and Doro Baga on the shore of Lake Chad in northeast Nigeria, which began on January 3.

"They killed so many people. I saw maybe around 100 killed at that time in Baga. I ran to the bush. As we were running, they were shooting and killing," a man said.

A woman who survived the attack said that she "doesn’t know how many but there were bodies everywhere we looked."

"No one stayed back to count the bodies. We were all running to get out of town ahead of Boko Haram fighters, who have since taken over the area," another witness said.

On Thursday, Amnesty International released a spate of satellite images that they said show "indisputable and shocking evidence" of the scale of the Boko Haram attacks on the two Nigerian towns last week.

The images confirm that more than 3,700 structures were "damaged or completely destroyed" in the attacks.

"These detailed images show devastation of catastrophic proportions in two towns, one of which was almost wiped off the map in the space of four days.

Meanwhile, the Nigerian government has rejected reports that about 2,000 people were killed in the attacks, claiming that the death toll stands at 150.