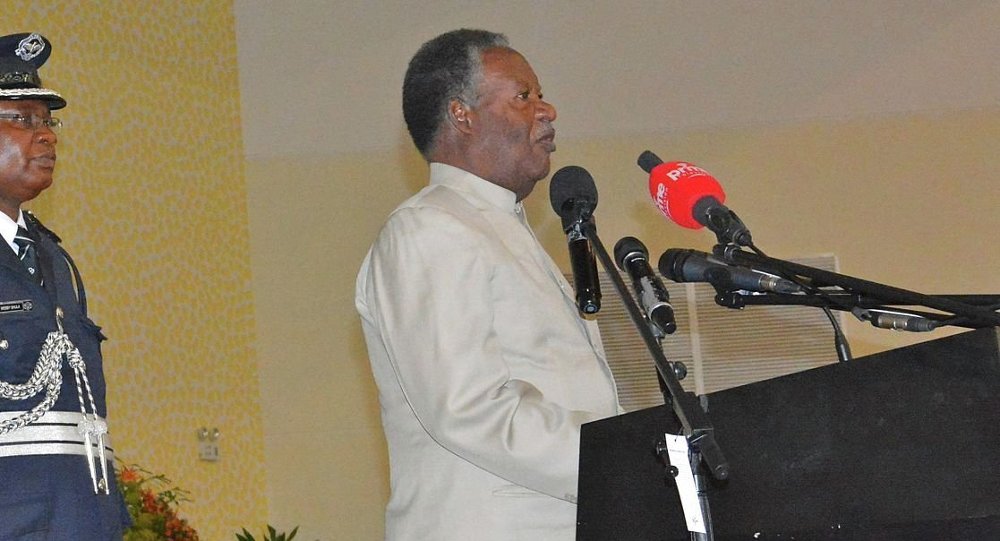 President Michael Sata of Zambia died Tuesday night at a hospital in London, where he was being treated, his cabinet secretary Robert Msiska told reporters.

MOSCOW, October 29 (RIA Novosti) — Zambian President Michael Sata died in London at the age of 77 on Tuesday night, where he had been staying for medical treatment, Cabinet Secretary Robert Msiska told the press.

“It is with a heavy heart that I announce the passing on of our beloved president,” Msiska said, telling Zambians that they should “remain calm, united and peaceful during this very difficult period.”

Zambian officials and representatives of the King Edward VII Hospital, where the president had been staying for treatment, have offered no comment as the cause of death.

Sata’s death comes just days after his country celebrated the 50th anniversary of its independence from Britain.

After being elected in 2011, Sata had long been suspected of being ill by the local media and Zambian opposition groups; he had suffered from a heart attack in 2008 before coming to power. The president often underwent treatment abroad throughout his term. In September, Sata was hospitalized in New York City after traveling to the US to participate in the 69th Session of the General Assembly of the UN.

Sata failed to make his scheduled speech. Days before his trip to New York, Sata appeared at the opening of the country’s parliament in Lusaka to calm speculation, joking that “I am not dead.” Sata left for London to obtain medical treatment on October 19.

The Zambian cabinet was scheduled to meet this morning to announce Sata’s successor. Sata had left Minister of Justice and Defense Edgar Lungu in charge as acting president while undergoing treatment.

According to Zambia’s constitution, Sata should be succeeded by Vice President Guy Scott, who must hold presidential elections within 90 days.

Scott, a white Zambian whose parents were born in Britain, is constitutionally ineligible to run for president, which stipulates that a presidential candidate’s parents must be Zambian-born. Zambian and regional media have speculated about whether Lungu will be willing to hand over power to Scott in the interim.

Nicknamed the “King Cobra” for his quick temper and harsh rhetoric toward the media, his political foes and even his own ministers, supporters saw Sata as a no-nonsense man of action, who spent his term fighting unemployment, poverty and corruption. Detractors saw him as a populist with authoritarian tendencies, and questioned his ability to govern due to his ill health.

Zambia has enjoyed political stability and solid economic growth in recent years, with 7 percent growth projected for this year, Reuters explained. The country had a smooth transition of power in 2011, when Sata’s Patriotic Front Party defeated the incumbent Movement for Multiparty Democracy, which had been in power for 20 years. Many of the issues Sata focused on as candidate for president remain serious problems in the country, with official unemployment at a staggering 65 percent, and 60 percent of Zambians living on less than a dollar a day.

President Sata had been criticized by domestic businessmen and Chinese and Indian investors, after threatening to take away mining licenses and to expel investors for tax evasion and paying what he called “slave wages” to mining sector workers. Zambia is Africa’s second-largest producer of copper.

Sata is survived by his wife and eight children.

Sub-Saharan Africa's Economy to Grow by More Than 5% Amid Ebola Outbreak: IMF