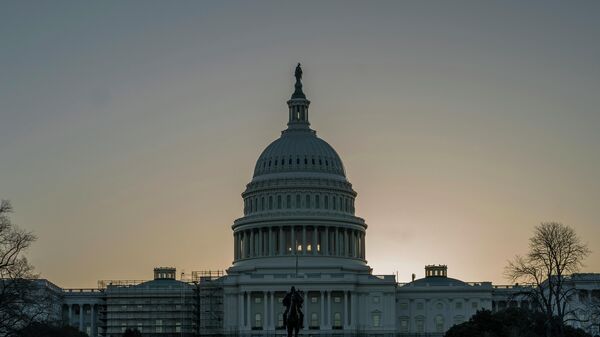 Subscribe
International
India
Africa
Russia launched its special military operation in Ukraine in February, after Ukraine increased its attacks against the Donetsk and Lugansk people’s republics.
Russia began striking Ukrainian infrastructure on October 10, two days after the terrorist attack on the Crimean Bridge, which Moscow believes was plotted and carried out by Kiev.
The strikes are carried out on power, defense industry, military command and communications facilities across Ukraine. Since then, air raid warnings have been issued in Ukrainian regions every day, sometimes throughout the country.
After the strikes on November 15, Ukrainian Prime Minister Denis Shmyhal said that almost half of the country's energy grid had been put out of service.
Follow Sputnik's Live Feed to Find Out More!
Table of contents
New firstOld first
23:16 GMT 06.12.2022

"A shelling attack by Ukrainian armed units was recorded in the direction: 00:43 - the settlement of Tonenkoye - the city of Donetsk (Voroshilovsky District): six rockets were fired from a BM-21 Grad MLRS," the office said.
19:52 GMT 06.12.2022
US Senate to Hold Classified Briefing on Ukraine Tomorrow - Majority Leader
The US Senate will hold a classified briefing to update lawmakers on the conflict in Ukraine as Congress attempts to pass a government funding bill and the National Defense Authorization Act (NDAA) before the end of the year, Majority Leader Chuck Schumer said on Tuesday.
"Tomorrow, we’ll have an all-Senators classified briefing on the latest developments in Ukraine. I’m confident Senators will leave that briefing with a stronger understanding about how critical an omnibus is, not just to fund the government and keep our country moving and innovating, but to ensure we’re providing our troops, our veterans and our allies with what they need," Schumer said during a conference.
Republicans and Democrats will continue negotiations to fund the government through an omnibus bill or continuing resolution, as well as to pass the NDAA, before the new Congress takes office in January, Schumer said.
Schumer and Minority Leader Mitch McConnell agreed to work together on government funding legislation, for which both sides will "have to give" to send a bill to President Joe Biden’s desk, Schumer said.
18:19 GMT 06.12.2022
Parties to Ukraine Conflict Must Uphold Int'l Law on War Prisoners: Chinese Envoy to UN
China stands for upholding the Geneva Conventions regarding the treatment of prisoners of war in the Ukraine conflict and captured combatants must be treated humanely, Chinese Deputy Permanent Representative to the United Nations Geng Shuang said on Tuesday.
"According to the third Geneva Convention, prisoners of war are entitled to human treatment and protection from torture and ill treatment and other harm," Geng Shuang said during a meeting of the UN Security Council.
The parties to the conflict should strictly uphold relevant international law, he added.
17:03 GMT 06.12.2022
Russian Envoy to UN Nebenzia Leaves UNSC Meeting During Ukraine Ambassador's Address
Russian Ambassador to the United Nations Vassily Nebenzia walked out of the UN Security Council's room on Tuesday right before his Ukrainian counterpart, Sergiy Kyslytsya, began his speech, a Sputnik correspondent reports.
"I am not going to listen to what is going to be said by the representative of the Ukraine team," Nebenzia told a UN Security Council meeting.
Nebenzia referred to the "undiplomatic tweets" of the Ukrainian envoy.
16:49 GMT 06.12.2022

World
Hungary Slaps Down €18 Billion EU Aid Package for Kiev
16:25 GMT 06.12.2022
Ukrainian Ambassador Says Germany Mulling Sending Heavy Weapons to Ukraine
Germany is considering providing Kiev with heavy weapons, with negotiations on timing and supply logistics conducted in the "triangle" format, Ukrainian Ambassador to Berlin Oleksiy Makeev said on Tuesday.
Makeev said previously that Ukraine needed weapons such as Leopard tanks, Marder infantry fighting vehicles, Fuchs and Dingo armored personnel carriers.
"The President, the Minister of Defense, the Minister of Foreign Affairs constantly say that we [Ukraine] need serious armored vehicles... This message has reached the people in the [German] government and in the Bundestag here. I have no reason to believe that someone in Germany is ruling out the possibility of supplying such weapons," Makeev said in an interview with Ukrinform news portal.
Makeev noted that he had already held several negotiations with representatives of the German military-industrial complex in the format of a Ukraine-Germany-industry "triangle."
16:14 GMT 06.12.2022
Russia Requests UNSC Meeting on December 9 to Discuss Weapons Supplies to Ukraine by West
Russia has requested a UN Security Council meeting on December 9 to address the matter of weapons supplies to Ukraine by the collective West, Russian mission to the United Nations said on Tuesday.
"In our speech at the meeting of the Security Council today, we requested another meeting of the Security Council on Ukraine on Friday, December 9th," the Russian mission said in a statement. "The topic is the supply of Western weapons to Ukraine. There is a lot to talk about here!"
16:10 GMT 06.12.2022