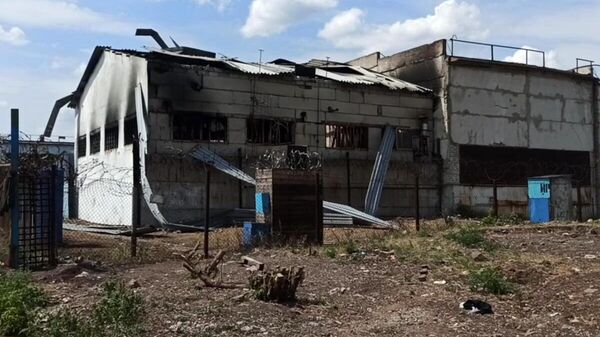 On Tuesday, the first ship carrying grain left the Port of Odessa and reached Istanbul, after Moscow and Kiev agreed on a deal to restore the flow of food and fertilizer via the Black Sea.
Russian and Donbass forces continue advancing amid the special operation, having liberated the territory of the Lugansk People's Republic from Kiev's troops last month. At the same time, the Ukrainian military continues to shell Donbass cities, including Donetsk.
Last Friday, the Ukrainian military hit a detention facility in Elenovka, DPR with a HIMARS rocket launcher. As a result, several dozen Ukrainian PoWs were killed. The Russian MoD noted that the attack was thoroughly planned by Kiev and approved by Washington, since Ukraine coordinates HIMARS strikes with the United States.
Follow Sputnik's live feed and Telegram channels to get the latest updates:
Sputnik News US — https://t.me/sputniknewsus
Sputnik News India — https://t.me/sputniknewsindia
Table of contents
New firstOld first
03:46 GMT 04.08.2022
Over 25,000 People Evacuated From Ukraine, Donbas to Russia in Past Day - Defense Ministry
More than 25,000 people have been evacuated to Russia over the past 24 hours from dangerous areas of the Donetsk and Lugansk People's Republics (DPR and LPR) and Ukraine, head of the Russian National Defense Control Center, Col. Gen. Mikhail Mizintsev, who also leads Russia's humanitarian response coordination headquarters, said.
"Over the past day, without participation of the Ukrainian authorities, 25,233 people, including 4,097 children, were evacuated to the territory of the Russian Federation from dangerous areas of Ukraine and the Donbas republics," Col. Gen. Mizintsev said at a briefing.
He added that since the start of Russia's special military operation, more than 3 million people, including over 486,000 children, have been evacuated to Russia.
03:01 GMT 04.08.2022
Russia Supplied Nearly 51,000 Tonnes of Humanitarian Aid to Ukraine, Donbas - Ministry
Since March 2, Russia has delivered nearly 51,000 tonnes of humanitarian cargoes to Ukraine and the Donbas republics, head of the Russian National Defense Control Center, Col. Gen. Mikhail Mizintsev, who also leads Russia's humanitarian response coordination headquarters, said.
Col. Gen. Mizintsev said three humanitarian events were held in the Donetsk People's Republic, the Kharkiv and Kherson regions on August 3.
Russia launched a special military operation in Ukraine on February 24 in response to calls by the Donetsk and Lugansk People's Republics for protection from Ukrainian troops. The Russian Defense Ministry said the goal of the operation, which targets Ukrainian military infrastructure, is to "demilitarize and denazify" Ukraine, and to completely liberate Donbas.
Russian President Vladimir Putin has said the operation aims to "protect people subjected to genocide by the Kiev regime for eight years." As of March 25, the Russian Armed Forces completed the main tasks of the first stage, significantly reducing the combat potential of Ukraine. Western nations have imposed numerous sanctions on Russia and have been supplying weapons to Ukraine.
02:24 GMT 04.08.2022

Istanbul Grain Deal
First Ship With Ukrainian Grain Cleared to Proceed to Lebanon After Istanbul Inspection
11:32 GMT 03.08.2022
Berlin Says There is No Need for Guarantee Papers on Siemens Turbine, It is Not Under Sanctions
09:35 GMT 03.08.2022
Report: Turkey Confirms RAZONI Ship Carrying 27,000 Tons of Corn Inspected, Will Procced to Lebanon

"MoD: Joint inspection team completed their activity on board Razoni. The ship carrying 27 thousand tons of corn will pass through the Bosphorus to go to Lebanon," the tweet says.

09:25 GMT 03.08.2022
Joint Team in Istanbul Inspects RAZONI Ship Carrying Grain From Ukraine
08:10 GMT 03.08.2022
Moscow: Era of Cooperation With US and Europe Has Ended for Russia, Situation Won't Change Back
07:54 GMT 03.08.2022
There Are 'No Reasons' for Germany Not to Send Gas Turbine for Nord Stream to Russia, Chancellor Scholz Says
07:35 GMT 03.08.2022
Inspection Starts at RAZONI Ship Carrying Grain From Odessa
Our Sputnik correspondent reported that a group of inspectors, which includes representatives from Russia, Ukraine, Turkey, and the UN, has embarked for the RAZONI ship. The inspection is underway and it is expected to take around an hour.
RAZONI is the first vessel carrying grain from Odessa since the sides agreed to restore the flow of grain and fertilizers via the Black Sea to avoid a food crisis.

"The Joint Inspection Team reached the corn-laden cargo ship RAZONI anchored at the Black Sea entrance of the Bosphorus, and the inspection began on board," a tweet from the Turkish MoD says.