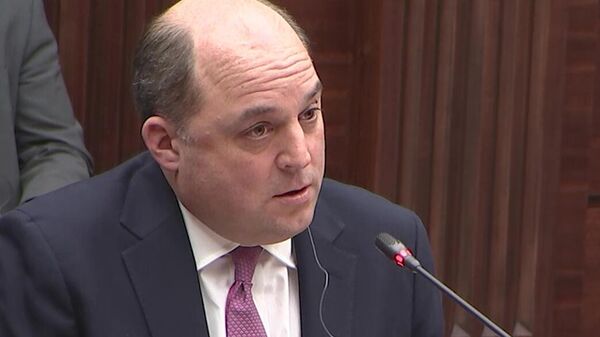 "Of course, the situation in the UK, the government crisis cannot be a priority of our work. After all, we are primarily following what is happening in our country. But we are, certainly, also paying attention to the [UK] government crisis," Peskov told reporters.
12:35 GMT 07.07.2022
Russian Ambassador to UK: It's Too Early to Say How Johnson's Resignation Will Affect Relations Between Moscow, London
It is too early to predict the impact of the resignation of UK Prime Minister Boris Johnson on Russian-British relations, Russian Ambassador to London Andrey Kelin said on Thursday.

"Now we will monitor and react, so it's too early to talk about how much it [Johnson's resignation] will affect Russian-British relations," Kelin told Russian broadcaster Channel One.
11:46 GMT 07.07.2022
UK Foreign Secretary Truss on Johnson's Resignation: He Made Right Decision

The PM has made the right decision.

The Government under Boris's leadership had many achievements - delivering Brexit, vaccines and backing Ukraine.

We need calmness and unity now and to keep governing while a new leader is found.

According to previous reports, Johnson agreed to resign after talking to Brady.
11:23 GMT 07.07.2022
Liberal Democrats Leader Davey Says His Party Will Support No-Confidence Vote Against Johnson If He Refuses to Step Down, Reports Say
11:21 GMT 07.07.2022
Andrew Stephenson Appointed Minister Without Portfolio
11:20 GMT 07.07.2022
Shailesh Vara Appointed as Secretary of State for Northern Ireland
11:05 GMT 07.07.2022
Boris Johnson's Statement Expected in About 30 Min, Sky News Says
10:57 GMT 07.07.2022
Johnson Called Queen Elizabeth II on Thursday to Announce Intention to Step Down as Prime Minister, Reports Say
UK Prime Minister Boris Johnson called Queen Elizabeth II on Thursday to announce his intention to step down, the Sun newspaper reported.
Johnson does not need to go to Buckingham Palace until he officially retires, it added.
10:47 GMT 07.07.2022
Keir Starmer Vows to Table No-Confidence Vote if BoJo Doesn't Resign
"He needs to go completely. None of this nonsense about clinging on for a few months. He's inflicted lies, fraud and chaos in the country. And, you know, we're stuck with a government which isn't functioning in the middle of a cost of living crisis," Keir said.