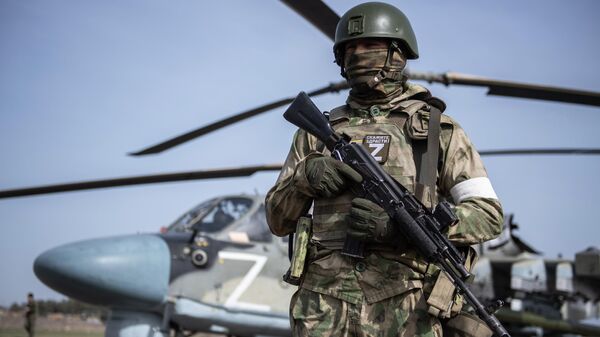 Being updated
The Russian Foreign Ministry said that the World Health Assembly’s vote on a draft resolution calling for Russia’s suspension from regional meetings over Ukraine showed the world was waking up to the fact that Kiev’s allies were trying to isolate Moscow and politicize the UN health agency.
The 75th World Health Assembly in Geneva voted 88-12, with 53 abstentions, to pass the resolution on "Health emergency in Ukraine." Russia said this was just a fraction of the 183 member states who make up the World Health Organization.
Meanwhile, media reports suggest the US administration could announce a new security aid package for Ukraine that includes advanced, long-range rocket systems as early as next week.
Also on Friday, the Russian military providd new details on US military biological activities in Ukraine, highlighing also Washington's interest in the smallpox pathogen as a priority pathogenic agent for combat use.
Russia launched a special military operation in Ukraine on 24 February in response to calls from the Donetsk and Lugansk People's republics for protection against intensifying attacks by Ukrainian troops, with aim of putting an end to the 8-year offensive by the Kiev regime.
Follow Sputnik's live feed to find out more.
New firstOld first
21:40 GMT 28.05.2022
Russian Embassy Dismisses Accusation of Incitement of Genocide Against Moscow
On Friday, a report was released by the Washington-based New Lines Institute for Strategy and Policy and the Montreal-based Raoul Wallenberg Centre for Human Rights, claiming that there is "serious risk of genocide in Ukraine" that Russia is allegedly responsible for.

The Russian Embassy stressed in a statement on Saturday that on the ground, the situation in Ukraine is exactly the opposite.

"We noticed the report of the NGO New Lines Institute for Strategy and Policy, circulated in the American media, in which Russia is accused of inciting genocide in Ukraine. These fresh Russophobic insinuations are part of a campaign orchestrated by the West to demonize the Russian Armed Forces," the embassy said.

It called on the American public to pay attention to the facts and stop criminal indifference to the actions of Ukrainian radicals.
21:23 GMT 28.05.2022
Russian Defense Ministry Says Over 20,000 People Evacuated From Ukraine, Donbass Today
18:55 GMT 28.05.2022
Russian MoD: Ukrainian Forces Planning 'Chemical Weapons' Provocation in Sumy
Ukrainian militants are preparing a provocation with the use of toxic substances to accuse the Russian Armed Forces of it, Colonel-General Mikhail Mizintsev, head of the National Defence Control Centre of the Russian Federation, said.
According to him, Ukrainian neo-Nazis plan to open fire in a residential area in Sumy close to the border with Russia to provoke retaliatory strike and then blow up containers with chemically dangerous substances. Foreign journalists and photo correspondents are currently staying in Sumy to cover the provocation and distribute the information and footage abroad.
18:34 GMT 28.05.2022

Biden Suspends US Steel Tariffs on Ukraine for One Year
17:18 GMT 28.05.2022
This Man Wishes President Zelensky and His Family Visited Mariupol to See Suffering of Civilians With Their Own Eyes - Video
14:21 GMT 28.05.2022
Mariupol Resident Tells How Badly Azov Battalion Fighters Treated Local Population - Video
13:15 GMT 28.05.2022
Resident of Svetlodarsk in DPR Tells How Ukrainian Nationalists Attempted to Blow Up Dam at Local Power Plant - Video
12:53 GMT 28.05.2022
Putin Confirms to Macron, Scholz Russia's Openness to Resume Dialogue With Kiev
Russian President Vladimir Putin has informed his French counterpart, Emmanuel Macron, and German Chancellor Olaf Scholz about the current situation with the now-frozen talks with Ukraine, saying that Moscow is willing to resume the dialogue, the Kremlin said on Saturday.

"Special attention was paid to the situation with the negotiations that are frozen through the fault of Kiev. Vladimir Putin confirmed the Russian side's openness to resume the dialogue," the Kremlin said in a statement.
12:48 GMT 28.05.2022
Ukrainian POW Recalls Horror of Witnessing Their Commander Shooting Soldier For Not Digging Trench - Video
12:28 GMT 28.05.2022
Kremlin: Putin Holds Phone Talks With Macron and Scholz
Russian President Vladimir Putin has held phone conversations with French President Emmanuel Macron and German Chancellor Olaf Scholz on Saturday, the Kremlin said.
Putin informed Macron and Scholz that further supplies of Western weapons to Ukraine are increasing risks of destabilization.
The sides have also discussed the global food security situation. Putin stressed that difficulties with food supplies have resulted from erroneous policy of the West. The Russian president said his country was ready to look for options that could be used to ensure unhindered grain export, including export of Ukrainian grain from Black Sea ports.
According to Putin, lifting of sanctions on Russian fertilizers would decrease tensions on global market.
10:39 GMT 28.05.2022
Russia Opens Humanitarian Corridors for Ships, Kiev Refuses to Cooperate - Moscow
The Western statements about Russia blocking foreign ships in the Black and Azov seas are unfounded, as Moscow opens humanitarian corridors every day, but the Ukrainian authorities refuse to cooperate, Russian Foreign Ministry spokeswoman Maria Zakharova said on Saturday.

"As for the statements made the day before by official representatives of foreign states about the 'blocking' by the Russian military of foreign vessels in the waters of the Black and Azov seas, they are not consistent with reality. The port in Mariupol has resumed work after the military of Russia and the DPR gained control over it, so the navigating channel was unblocked, and the conditions were created for the ships to leave," Zakharova said.

According to the spokesperson, the Russian armed forces open two maritime humanitarian corridors daily from 8 a.m. to 7 p.m. Moscow time (05:00 to 16:00 GMT), but the Ukrainian authorities "refuse to interact with representatives of foreign states and shipowner companies to ensure the safe exit of the blocked ships, practically holding the crews hostage."

On Thursday, the head of the Russian National Defence Control Center, Col. Gen. Mikhail Mizintsev, said that foreign shipowners had ignored opportunities provided by Russia to safely withdraw their vessels from the port of Mariupol, and called on the diplomatic missions of Bulgaria, the Dominican Republic, Liberia, Panama, Turkey, Jamaica and the International Maritime Organization to influence the shipowners.

According to the defence official, the danger of mines in the waters of the Mariupol port has been eliminated and the harbour can be safely used by civilian ships, and a 139 nautical miles long and 3 miles wide naval humanitarian corridor from other Ukrainian ports in the Black Sea will be open daily starting 27 May, with the Ukrainian side being responsible for ensuring the safety of ships leaving the ports.

On Tuesday, the Russian Defence Ministry said that the minesweepers finished clearing the Mariupol port of mines and freed the routes from sunken ships and other navigational hazards. Works to recover port infrastructure are currently underway. On Wednesday, Zakharova said that five foreign vessels were able to leave after the demining.
08:46 GMT 28.05.2022
Kherson Region Switches to Moscow Time - Authorities
The Kherson Region has switched to Moscow time, deputy head of the military-civil administration of the region Kirill Stremousov told Sputnik on Saturday.

"We have switched to Moscow time and now live according to Moscow time. Moscow is the centre of time in the Kherson Region," Stremousov said, adding that starting this year, the region will no longer switch to winter time, as in Ukraine.

On Friday, the authorities of the liberated part of the Zaporozhye Region announced the transition to Moscow time.

The Russian military, during a special operation to demilitarize Ukraine, took control of the Kherson Region in the south of the country and part of the Zaporozhye Region. Military-civilian administrations have been formed in the regions, broadcasting of Russian TV channels and radio stations has begun, and trade ties with Crimea are being restored.
08:39 GMT 28.05.2022
City of Krasny Liman Completely Liberated From Ukrainian Nationalists – Russian MoD
07:57 GMT 28.05.2022
Russian MoD Releases Footage Showing Conduct of Combat by Airborne Forces During Special Military Operation
07:30 GMT 28.05.2022
DPR Evacuates Over 370 Civilians from Mariupol to Bezimennoe Village Over Past 24 Hours
More than 370 people, including 42 children, were evacuated from Mariupol to the village of Bezimennoe located in the Donetsk People's Republic (DPR) over the past 24 hours, the DPR territorial defence headquarters said on Saturday.

A total of 37,334 people have been evacuated to Bezimennoe since March 5.

Mariupol, a coastal city in the breakaway DPR with a population of 450,000, went under the control of Ukrainian troops during the 2014 offensive. On May 20, Russian Defence Ministry announced that the territory of the Azovstal metallurgical plant in Mariupol, where a group of Ukrainian militants from the nationalist battalion Azov was blocked since April 21 this year, was completely liberated.
05:48 GMT 28.05.2022
Russian Investigators Arrive in Kherson to Probe Into Cases of Torture, Shelling by Kiev
Russian investigators arrived in Kherson to probe into alleged cases of torture and shelling of the region with Tochka-U missiles carried out by Ukrainian militants, Kirill Stremousov, deputy head of the regional military-civilian administration, told Sputnik.

"A group of Russian investigators has arrived and launched investigation into the cases of torture by Ukrainian militants when the region was under the control of the Kiev regime, as well as the shelling of the region by nationalists with Tochka-U missiles. The investigative authorities are now working," Stremousov said.

During its military operation in Ukraine, Russia captured the entire Kherson Region in the south of the country and part of the southeastern Zaporozhye Region and established military-civilian administrations there. Russian TV channels and radio stations began broadcasting there, the Russian ruble was proclaimed as currency used alongside the Ukrainian gryvna, and attempts are being made to restore trade ties with Crimea.
02:42 GMT 28.05.2022
ROCOR Clergy Concerned About Fate of Ukrainian Orthodox Church - Archpriest
Earlier on Friday, the Council of the UOC of the Moscow Patriarchate declared independence.

"It is is difficult to talk about ROCOR’s attitude regarding this decision, as it just happened. Our bishops will consider it in the near future. However, I and many other clerics of ROCOR have always been concerned about the suffering faithful of the UOC," ROCOR Archpriest Seraphim Gan told Sputnik.

Gan noted that he has visited Ukraine regularly during the past 15 years and saw the suffering of the canonical church there.

"Everyone knows that the UOC was persecuted by the authorities and in the course of hostilities, these persecutions were aggravated," he said.

ROCOR has very close ties with the UOC and Ukraine itself, because the confessor of the late First Hierarch Metropolitan Laurus - Archbishop Vitaly (Maksimenko) - served at the Assumption Pochaev Lavra (monastery), while another Frist Hierarch - Metropolitan Antony (Khrapovitsky) - was Metropolitan of Kiev and Galicia in 1918-1920.

Gan also pointed out the spiritual friendship of ROCOR’s late First Hierarchs, Metropolitans Laurus and Hilarion, to the Primate of the UOC Metropolitan Onufrii.

"They were friends and fellow ascetic strugglers, real monks and men of fervent prayer," he said. "When Metropolitan Hilarion passed away last week, Metropolitan Onufrii took care to send his representative, Bishop Gideon, to the funeral."

Gan also recalled that Metropolitan Onufrii many times came to the United States and served in the ROCOR parishes, including his parish in Sea Cliff, New York.
21:28 GMT 27.05.2022
Russia to Create Regional University in Zaporozhye - Regional Head
Newsfeed
0
Access to the chat has been blocked for violating the rules . You will be able to participate again through:∞. If you do not agree with the blocking, please use the feedback form
The discussion is closed. You can participate in the discussion within 24 hours after the publication of the article.
To participate in the discussion
log in or register
loader
Chats
Заголовок открываемого материала