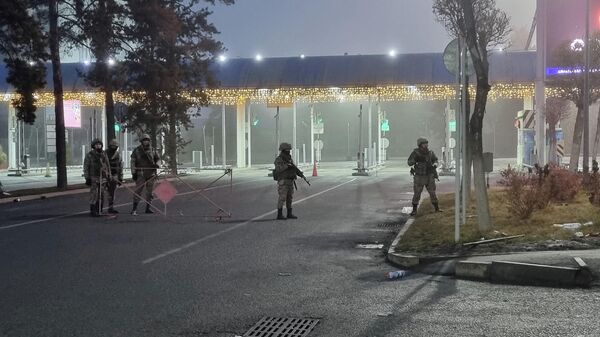 Violent protests erupted in Kazakhstan earlier in the month over an increase in prices for liquefied gas.
Despite the government's attempts to quell the crowds and now-fulfilled promises to decrease prices, peaceful protests turned into violent clashes with law enforcement officers, as well as looting, arson and acts of terrorism across Kazakhstan.
According to the country's Interior Ministry, 17 law enforcement officers were killed.
Foreign militants, including some recruited from Afghanistan and the Middle East, have participated in the aggression against Kazakhstan, Kazakh President Kassym-Jomart Tokayev said on Monday.
The State Secretary of the Republic of Kazakhstan, Erlan Karin, said that the unrest in Kazakhstan was a "hybrid terrorist" attack carried out with the participation of both internal and external forces and aimed at overthrowing the government.
After violence followed, Kazakh President Kassym-Jomart Tokayev declared a nationwide state of emergency, effective until 19 January, and invited Collective Security Treaty Organisation peacekeeping forces to help bring the situation under control and help eliminate "the terrorist threat".
Follow Sputnik's Live Feed to Find Out More!
New firstOld first
18:07 GMT 11.01.2022
UNICEF: Continuous Unrest in Kazakhstan May Jeopardize Access to Basic Necessities
MOSCOW (Sputnik), Ksenia Shakalova - The Kazakh people risk losing access to basic necessities if social and political unrest in the country continues unabated, Afshan Khan, the UNICEF regional director for Europe and Central Asia, said in an interview with Sputnik.

"While there are no immediate humanitarian needs, for now, the continuation of unrest could lead to a lack of access to basic necessities, particularly in areas most affected by the unrest," Khan said.

He said UNICEF is keeping in touch with the Kazakh government and is monitoring the situation, particularly with regard to the well-being of children.

"UNICEF stands ready to support all actions that protect and promote the rights and well-being of Kazakhstani children," the official stressed.

A wave of protests swept across Kazakhstan last week following a sharp rise in gas prices. Because of the violence that followed, Kazakh President Kassym-Jomart Tokayev declared a nationwide state of emergency, effective until January 19, and invited Collective Security Treaty Organization peacekeeping forces to help bring the situation under control. Having dismissed the old government, he appointed a new prime minister and reshuffled the cabinet on Tuesday.
14:19 GMT 11.01.2022
Organization of Turkic States Supports Kazakhstan's Counterterrorist Operation
The Council of Foreign Ministers of the Organization of Turkic States voiced its support for Kazakhstan's counterterrorist operation in a statement released Tuesday, stressing the importance of keeping it aligned with international norms and standards.

An extraordinary meeting of the Council was hosted virtually by Turkey earlier on Tuesday. The Council is composed of foreign ministers of Azerbaijan, Hungary, Kazakhstan, Kyrgyzstan, Turkey, Turkmenistan, and Uzbekistan.

"The Council of Foreign Ministers of the Organization of Turkic States has underscored the importance of upholding the basic norms and principles of international law and supported the counter-terrorist operations of the Government of Kazakhstan against terrorists, radicals, extremists and criminals, who aim to destroy Constitutional order," the ministers said in a statement, published on the Uzbek foreign ministry's website.

The Council condemned acts of violence during the protests which precipitated the Kazakh counterterrorist operation. It also expressed confidence in the ability of the Kazakh authorities to restore peace and stability, which it said is "vital for stability and security in the region and beyond."

"The Council has declared their support for the reform agenda of the President of the Republic of Kazakhstan, H.E. Kassym-Jomart Tokayev to further increase the wellbeing and prosperity of the brotherly people of Kazakhstan," the statement read.

Protests began in the cities of Aktau and Zhanaozen in southwest Kazakhstan last week over a twofold hike in fuel prices. They quickly spread to the country's largest city and economic hub, Almaty, as well as other cities, and turned violent. Shops were looted, government offices attacked. Tokayev dismissed the government on January 5 and requested help from the Collective Security Treaty Organization, which sent a peacekeeping mission to Kazakhstan.

On 7 January, the Kazakh president said that the demands of peaceful protesters had been heard and vowed retribution for insurgents refusing to lay down arms.
14:05 GMT 11.01.2022
New Kazakh Prime Minister Holds Phone Conversation With Mishustin
New Prime Minister of Kazakhstan Alikhan Smailov on Tuesday held a phone conversation with his Russian counterpart, Mikhail Mishustin, and the sides have expressed readiness to strengthen the strategic partnership, the Kazakh government said.

"Issues of bilateral trade and economic cooperation and interaction within the framework of the Eurasian Economic Union were discussed [during the phone conversation]," the government said in a statement.
09:03 GMT 11.01.2022
CSTO Mission in Kazakhstan to End After Situation Stabilizes, Defence Minister Shoigu Says
The Collective Security Treaty Organization (CSTO) mission in Kazakhstan will end after the situation in the country fully stabilizes and its authorities make such a decision, Russian Defense Minister Sergei Shoigu said on Tuesday.

"The implementation of tasks by the Collective Peacekeeping Forces will be carried out until the situation in Kazakhstan is completely stabilized, naturally, by decision of the leadership of Kazakhstan," Shoigu told a government meeting.
08:03 GMT 11.01.2022
Kazakh President Announces 5-Year Moratorium on Salary Increase For Civil Servants
President of Kazakhstan Kassym-Zhomart Tokayev announced on Tuesday a five-year moratorium on salary increase for members of the Kazakh government and deputies.

"I believe that the salaries of the above-mentioned categories of civil servants [members of government and deputies] are quite sufficient, therefore I consider it possible to declare a five-year moratorium on increasing the salaries of members of the government, regional akims [heads of local governments] and deputies," Tokayev said, speaking before the parliament.

He also instructed the National Bank of Kazakhstan to ensure the stability of the foreign exchange market until the full return of confidence in the country's national currency, the tenge.

In addition, the president instructed the government to develop and adopt within two months a program to increase the income of the country's population and reduce unemployment. He also called for adapting social policy "to new realities," given the COVID-19 pandemic and other social problems. In this regard, the president instructed the authorities to create a public social fund, which will deal with health care, education and social problems.
06:01 GMT 11.01.2022
Tokayev Signs Decree to Appoint Smailov as Prime Minister of Country - Presidential Office
Kazakh President Kassym-Jomart Tokayev signed on Tuesday a decree on the appointment of former First Deputy Prime Minister Alikhan Smailov, who is currently the acting prime minister, as government head, the presidential office said.

"To appoint Alikhan Smailov ... the prime minister of Kazakhstan," the office said citing the decree.
Earlier in the day, the lower house approved Smailov's candidacy.
06:01 GMT 11.01.2022
Tokayev Says Terrorist War Was Unleashed Against Kazakhstan
Kazakh President Kassym-Jomart Tokayev said on Tuesday that a terrorist war was unleashed against the country.

"A terrorist war was unleashed against our country. The enemy showed extreme cruelty and readiness to take any steps. He sowed fear among the population in order to suppress even the very idea of resistance. The plan of attack on Kazakhstan included a number of different aspects: military, political, ideological, disinformation and others," Tokayev told lawmakers.

The leader lashed out at the country's National Security Committee, noting that the committee failed to detect the threat to the country's national security.

"Professionals worked on the preparation of the seizure of power in Kazakhstan," the president said, noting that the attempted coup failed.
05:57 GMT 11.01.2022

"Interior Ministry: 9,900 people were detained by law enforcement officers," a report in a Telegram channel, which posts information from Kazakh departments, said.
Newsfeed
0
Access to the chat has been blocked for violating the rules . You will be able to participate again through:∞. If you do not agree with the blocking, please use the feedback form
The discussion is closed. You can participate in the discussion within 24 hours after the publication of the article.
To participate in the discussion
log in or register
loader
Chats
Заголовок открываемого материала