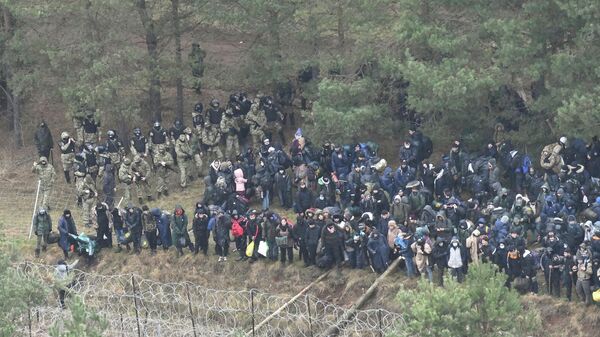 "It looks very likely that on EU27 ministerial level the border issue and the sanctions will be discussed shortly. A leaders’ VTC [videoconference] might follow afterwards," the source said.

"What we are facing here, and we have to state it clearly, is a manifestation of state terrorism", Prime Minister Mateusz Morawiecki said at a briefing following negotiations with European Council President Charles Michel.

"We have to talk about effective blocking of flights from the Middle East to Belarus because we know that this is just an instrument of political revenge", Morawiecki told a press conference after his meeting with European Council President Charles Michel in Warsaw.

"The situation with refugees on the borders of Belarus with the EU countries was examined in detail. Concern was expressed about the humanitarian consequences of the migration crisis... Vladimir Putin and Angela Merkel agreed to continue the conversation on this issue," the Kremlin said in a statement.

In addition, Putin proposed to "establish a discussion of the problems" directly between Minsk and the EU.
10:14 GMT 10.11.2021
Minsk Sees Risk of Border Conflict With Poland Over Situation With Migrants

"The facts of the use of weapons by the Polish security forces against refugees were repeatedly confirmed by video recordings made earlier. There was no reaction to such actions of the Polish authorities from the EU, which indicates a tacit agreement with almost any illegal actions in solving the migration crisis," the Belarusian Border Committee said in a statement, obtained by Sputnik.

The committee added that such actions may lead to "a border conflict".
09:52 GMT 10.11.2021
Kremlin Blasts Polish PM for 'Unacceptable' Claims That Russia is Linked to Migrant Crisis
09:37 GMT 10.11.2021
Multiple Trucks Stuck at Polish-Belarusian Border - Border Guards
WARSAW (Sputnik) - A massive queue of trucks can be seen at the Polish-Belarusian border after the closure of the Kuznica checkpoint, Katarzyna Zdanovich, a spokeswoman of the border committee in Poland’s Podlaskie region, said on Wednesday.

"According to my information, the waiting time at the border crossing in Bobrovniki is 39 hours", Zdanovich told reporters, adding that the queue is now 25 kilometres long.