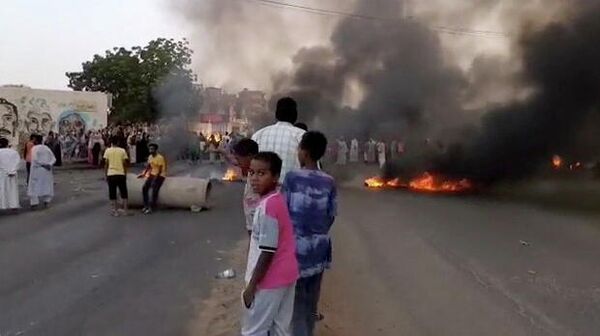 Live Updates: Sudan's PM Transported to Unknown Location After 'Refusal to Back Coup'

Subscribe
Military forces have been deployed in Khartoum, restricting civilians' movement and using tear gas to disperse protests, reports suggest.
People are holding mass rallies in the Sudanese capital of Khartoum, demanding a transfer of power from the military to a civilian government after Al-Hadath TV reported that Prime Minister Abdalla Hamdok was under house arrest - as well as four other cabinet ministers.
The coup was reported just a month before the expiration of the transitional Sovereign Council of Sudan, which assumed power in 2019, after ousting longtime President Omar al-Bashir. In November 2021, the council was expected to transfer power to the civilian government.
New firstOld first
17:30 GMT 25.10.2021
Sudan's Central Bank Employees to Go on Strike in Protest Against Military Coup, Country's Information Ministry Says
16:52 GMT 25.10.2021
UN Secretary-General Calls on Sudanese Stakeholders to Return to Dialogue Immediately
"The Secretary-General strongly condemns the ongoing military coup d’état in Khartoum and all actions that could jeopardize Sudan’s political transition and stability. Sudanese stakeholders must immediately return to dialogue, and engage in good faith to restore the constitutional order and Sudan’s transitional process", UN spokesperson Stephane Dujarric said in a statement in the wake of the new coup.
16:48 GMT 25.10.2021
US Senate Foreign Relations Committee's Head Warns Sudan Coup May Have Lasting Consequences on Bilateral Ties
"The Sudanese military’s takeover of the state apparatus is completely unacceptable and will have long-lasting consequences with respect to US-Sudanese relations. However, it’s not too late to reverse course and stop this attack on Sudan’s transition toward democracy", Senate Foreign Relations Committee Chairman Bob Menendez said.
Menendez also called on the Biden administration to utilise every diplomatic tool possible to send a message to the Sudanese military that the coup is unacceptable and must be ended.
16:03 GMT 25.10.2021
White House Says It's 'Deeply Alarmed' by New Coup in Sudan, Urges Military to Release Arrested Officials
"The United States is deeply alarmed at reports of a military takeover at the transitional government [of Sudan]. We reject the actions by the military and call for the immediate release of the Prime Minister and others who have been placed under house arrest", White House Principal Deputy Press Secretary Karine Jean-Pierre said.
15:55 GMT 25.10.2021
Brazilian Embassy in Sudan Plans to Remain Closed Due to New Coup
15:54 GMT 25.10.2021
Egypt Calls for Restraint in Sudan After Military Coup
15:54 GMT 25.10.2021
UK Ambassador Calls on Sudanese Military to Release Arrested Politicians
15:22 GMT 25.10.2021
Two People Killed After Sudanese Military Uses Firearms to Disperse Demonstration in Khartoum, Doctors Committee Says
The Sudan Central Doctors Committee has reported that two protesters were killed and over 80 more people were injured by the country's military after they opened fire.
15:11 GMT 25.10.2021
Sudanese Soldiers Detain at Least 15 High Ranking Officials, Politicians, Source Says
CAIRO (Sputnik) - Sudanese soldiers detained at least 15 high-ranking officials and politicians on Monday, a source in the Transitional Sovereign Council told Sputnik.

"The authorities have detained at least 15 high ranking officials and politicians," the source said.
13:40 GMT 25.10.2021
Sudan Needs to Resolve Internal Issues On Its Own, Russian Foreign Ministry Says

"We are convinced that the Sudanese people can and must independently resolve internal problems and determine the path of their country's sovereign development, proceeding from national interests. The Russian Federation will continue to respect the choice of the friendly Sudanese people and provide them with all the necessary assistance", Zakharova said in a statement, published by the ministry.

"We have no information about Hamdok's whereabouts and the situation with him at the moment", al-Mahdi told Al-Mayadeen broadcaster.

We call on all actors who are disrupting Sudan's transition to stand down, and allow the civilian-led transitional government to continue its important work to achieve the goals of the revolution. (2/2)

"Mahamat has learned with deep dismay of the serious development of the current situation in Sudan, which has resulted, among other things, in the arrest of Prime Minister Abdallah Hamdock and other civilian officials. The Chairperson calls for the immediate resumption of consultations between civilians and military within the framework of the Political Declaration and the Constitutional Decree ...The Chairperson further calls for the release of all arrested political leaders and the necessary strict respect of human rights," the African Union said in a statement.

09:36 GMT 25.10.2021
US Special Envoy Feltman Has Left Sudan, Reports Say
MOSCOW Sputnik) - US Special Envoy for the Horn of Africa Jeffrey Feltman who was paying a visit to the Sudanese capital of Khartoum left the country amid unrest there, Sky News Arabia reported on Monday, citing US sources.

Earlier in the day, Sudanese Prime Minister Abdalla Hamdok was taken to an undisclosed location by the military after he refused to support the coup. Several ministers, the Khartoum governor and other officials were detained.
09:25 GMT 25.10.2021
Sudanese Protesters Face Gunfire Near Military HQ in Khartoum
09:23 GMT 25.10.2021
Office of Sudan's Abducted Prime Minister Says Military Leaders Bear Responsibility for His Life and Health
Newsfeed
0
New firstOld first
loader
LIVE
Заголовок открываемого материала
Access to the chat has been blocked for violating the rules . You will be able to participate again through:∞. If you do not agree with the blocking, please use the feedback form
The discussion is closed. You can participate in the discussion within 24 hours after the publication of the article.
To participate in the discussion
log in or register
loader
Chats
Заголовок открываемого материала
Worldwide
InternationalEnglishEnglishMundoEspañolSpanish
Europe
DeutschlandDeutschGermanFranceFrançaisFrenchΕλλάδαΕλληνικάGreekItaliaItalianoItalianČeská republikaČeštinaCzechPolskaPolskiPolishСрбиjаСрпскиSerbianLatvijaLatviešuLatvianLietuvaLietuviųLithuanianMoldovaMoldoveneascăMoldavianБеларусьБеларускiBelarusian
Transcaucasia
ԱրմենիաՀայերենArmenianАҧсныАҧсышәалаAbkhazХуссар ИрыстонИронауОssetianსაქართველოქართულიGeorgianAzərbaycanАzərbaycancaAzerbaijani
Middle East
Sputnik عربيArabicArabicTürkiyeTürkçeTurkishSputnik ایرانPersianPersianSputnik افغانستانDariDari
Central Asia
ҚазақстанҚазақ тіліKazakhКыргызстанКыргызчаKyrgyzOʻzbekistonЎзбекчаUzbekТоҷикистонТоҷикӣTajik
East & Southeast Asia
Việt NamTiếng ViệtVietnamese日本日本語Japanese中国中文Chinese
South America
BrasilPortuguêsPortuguese