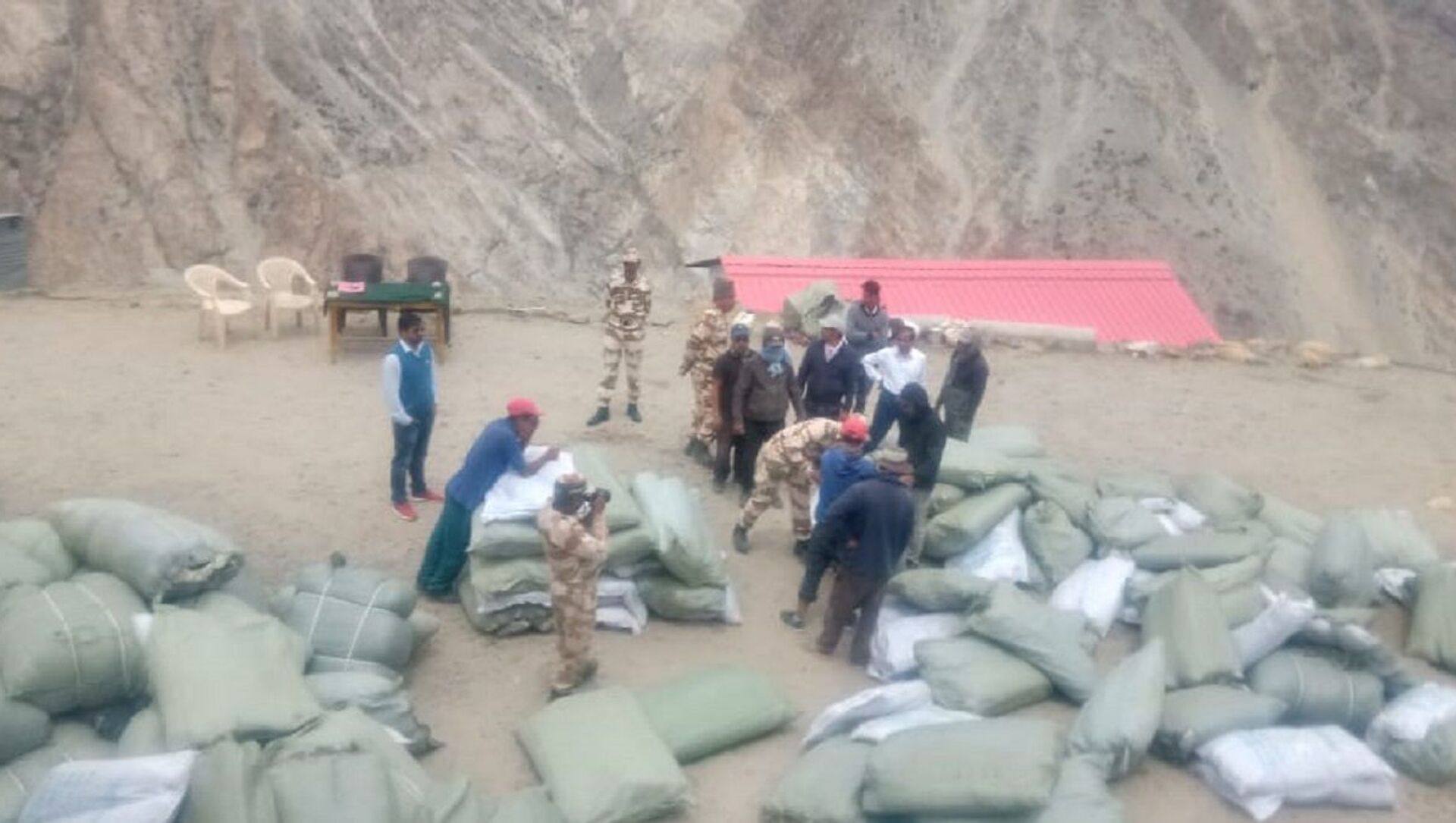 Priya Yadav
All materials
Shipki La is a mountain pass and border post that connects India's Himachal Pradesh state with the Tibetan Autonomous Region in China. Bilateral trade through Shipki La reopened in 1993 after it was shut because of the Indo-China war in 1962. It is through this pass that the turbulent waters of Sutlej River enter India from Tibet.

An ancient trade link between Tibet and India - Shipki La - that  threads its way through the mighty Himalayas, is struggling for survival during the times of pandemic.

Because of the coronavirus disease, trade has been suspended through the pass located in the Indian state of Himachal Pradesh for the second year in a row.

The last village on the Indian side - Namgia - reported several cases of COVID-19 and it has been declared a containment zone by Indian authorities.

Goods between India and China are not just bartered on these trade routes but also transported on mules - the way trade has been conducted here since time immemorial.

It is from Namgia Village that the Indian traders, about 115 of them, load goods on mules and transport them to villages on the Tibetan side. There is no road connection since the terrain is highly inhospitable.

For people in the villages around the Shipki La, one of the remotest parts of the Himalayas in India, barter trade - that is, swapping goods rather than exchanging goods for cash - with the people of Tibet on the other side of the mountain pass has been a profession that has been passed down from generation to generation.

Talking to Sputnik, 40-year-old Hishey Negi, president of the Indo-China Trade Association from Himachal Pradesh's Kinnaur District, said: “I am following in the footsteps of my maternal grandfather who spent his life trading goods with traders in Tibet. All my uncles do the same and so do I. We load mules with things such as edible goods, clothes, spices. But in my grandfather’s time even gold and silver ornaments used to be carried for barter.”

However, the traders are facing massive hardships now in continuing with the profession being practised for generations in their family.

“This link has suffered huge neglect. No trade centre has been built to ease the movement of goods. Trade boomed here in the past but not anymore.

"It is almost a dying culture now as new rules and regulations have made trading, which is arduous in itself, not so profitable a venture. Future generations might not be interested in this anymore,” Negi added.

The mules carrying the goods have to climb to more than 12,000 feet, before they make their descent into the villages on the other side of the border in the Tibet Autonomous Region.

“It takes six hours of descent from the zero point in India to reach the trading centre in Tibet and eight hours walking up on the journey back. We get a pass of three days from the Indian government for trading - this includes travel time,” says Negi.

Only the Indian traders are permitted to travel for the trade and none from Tibet is allowed to cross over to India.

A few years ago in 2013, trade suffered a setback when the Indian government banned the import and export of livestock because of the lack of quarantine facilities for imported animals.

Livestock barter was the biggest attraction and the most profitable for the traders on both sides of the border.

Today, Shipki La is among the three Indo-China trade links where barter system is still practised. The other two are Nathu La in Sikkim and Pithorgarh in Uttarakhand state. Although Nathu La has a good network of roads, both Pithorgarh and Shipki La trade are the only two places where  business has to be conducted on mules.

A senior administrative official in the Himachal Pradesh government told Sputnik: "Security is of paramount concern to us especially in these times when relations with China have been strained because of the Army clashes in Ladakh region.

"There has been a consistent demand of a trade centre to be built on the Indian side. The proposal has been cleared and money received for the project which we are in the process of implementing," the official added.