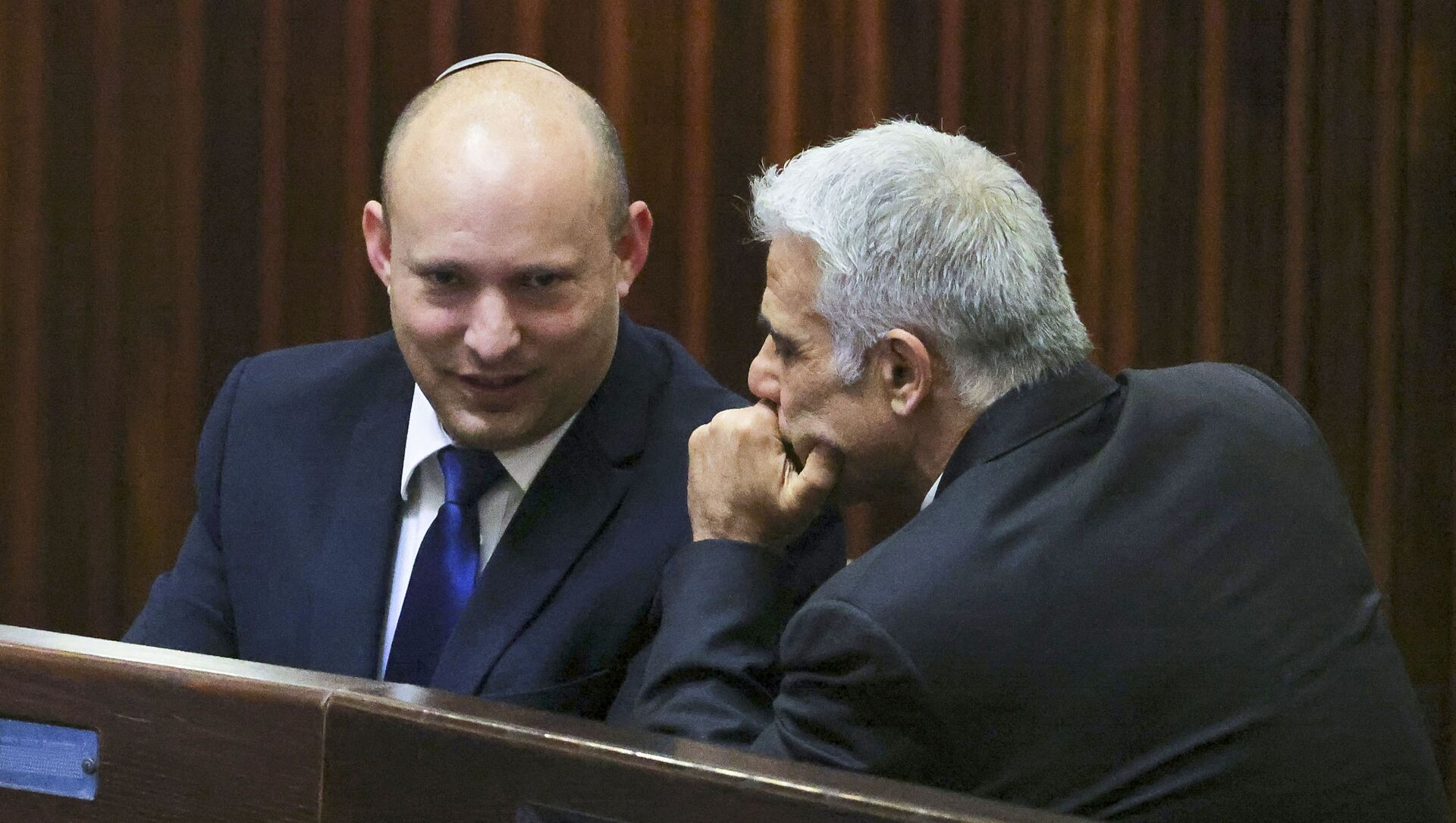 Elizabeth Blade
All materials
Comprising both liberal and hawkish parties, the Bennett-Lapid government will need to overcome a number of hurdles to stay afloat. These include compromises on the Israeli-Palestinian conflict, its attitude to LGBT community, and relations with Raam, an Islamic party set to receive billions of dollars from the Jewish state.

Following the decision to allow conservatives to hold the controversial Flag March in Jerusalem, where thousands of Jews strode through the city, including its Muslim neighborhoods, Hamas, which controls the Gaza Strip, sent dozens of incendiary balloons into Israel. Those caused 26 fires in the country's southern communities.

In response, Bennett gave an approval to retaliate, with the IDF striking multiple targets in the Gaza Strip.

His coalition partners, including those from parties with opposing ideologies, swallowed that move, but many political experts in Israel are worried that that "marital harmony" will not last long.

Opposing Ideologies Under One Roof

Bennett has every reason to worry about the stability of that union. His current coalition is comprised of eight parties, where at least two of them (the left-wing Meretz and the Arabs' Raam) don't see eye-to-eye with Yamina on many security issues, including the Israeli-Palestinian conflict.

Known for his hawkish views on the issue of Jerusalem, which he objects to share with the Palestinians, or the issue of the Jewish settlements in the West Bank, Bennett will need to find a compromise with Meretz and Raam that view Israeli actions as aggressive.

However, the friction with the liberal-left and Arab elements of his coalition will not be limited to security threats only. The partners will also find it difficult to agree on the issue of LGBT rights, on the ability of the judiciary to interfere in Israel's political affairs, and on matters pertaining religion and state, such as conversion to Judaism, marriage and immigration.

The distribution of funds might become yet another point of friction. According to the coalition agreement, Raam, an Islamic party with purported ties to the Muslim Brotherhood movement, would get nearly $13 billion over the course of five years.

That cash flow is supposed to solve the Arab community's acute problems, including raging violence, the distribution of drugs and illicit weapons. It is also set to address the sector's high unemployment rates, fight poverty and integrate the masses into Israeli society.

However, the catch is that Raam might end up not getting the much-needed funds. It is not only a matter of Israel's deficit, which in the beginning of 2021 stood at $50.4 billion, its absolute highest in the country's history.

It is also not only because Israel prefers to invest much of its funds into security and innovation, often at the expense of various domestic issues.

Rather, it is a matter of the public's growing dissatisfaction with parties that use their political weight to squeeze out funds and benefits that typically only serve certain groups, rather than Israeli society as a whole.

Up until recently, this has been the case with the Ultra-Orthodox parties, which over the years have received billions of dollars that were invested in their religious institutions, causing frustration among the general public.

Now, with them becoming part of the opposition, their influence will be limited but the concern in Israel is that Raam with its hunger for funds will be taking their place.

Bennett will therefore face a dilemma. He and the alternate Prime Minister Yair Lapid will want to keep the word they gave to Raam. However, they will also want to avoid angering the Israeli public.

That same public is already scrutinising the actions of the new government. Although the media has largely embraced the coalition that ended the 12-years long tenure of Netanyahu, it has also slammed it for a number of decisions it has already taken.

One was the decision to appoint Avigdor Liberman minister of finance; the chief of Yisrael Beitenu has often been accused of corruption.

Another was the excessive number of ministers the new coalition has. In the past, Lapid slammed Netanyahu for his 34 ministers and their deputies. Then he promised that if he came to power, the amount of key jobs would be limited to 18.

Now, the Bennett-Lapid government has 28 of these positions, and the Israeli public feels betrayed. They will need clear-cut proof that the more than two dozen ministers, who cost taxpayers millions of dollars a year, are actually doing the job.

And they will also need evidence that the coalition that vowed to bring in the much-needed change is living up to their expectations.