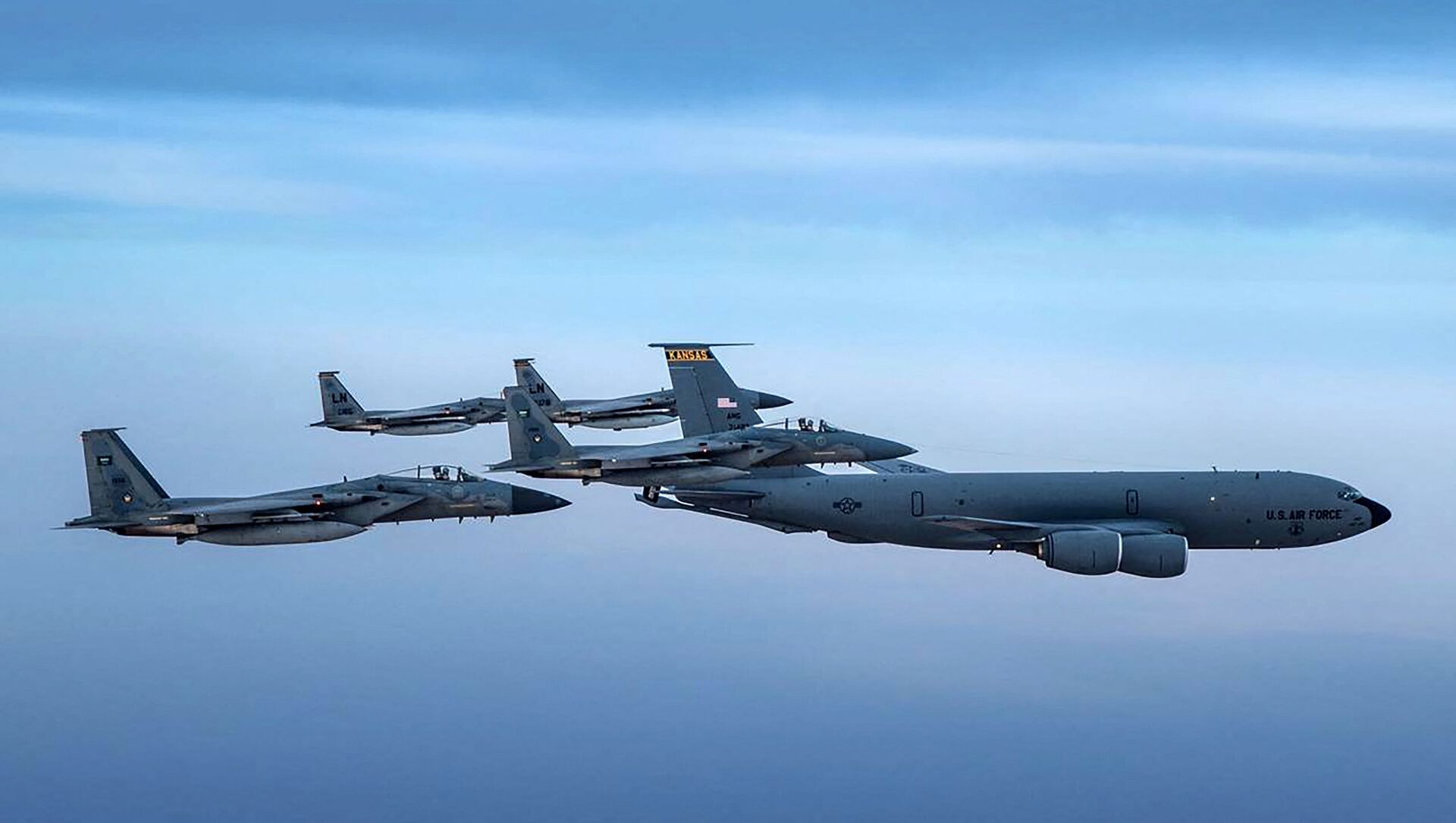 Morgan Artyukhina
All materialsWrite to the author
When the Houthis claimed responsibility for suicide drone attacks on two Saudi Aramco oil facilities in September 2019 that paralyzed the country’s economy for several days, the US quickly rushed to blame Iran, while they have also accused Tehran of exacerbating the war in Yemen by supporting the Houthis’ fight against Riyadh.

The head of US Central Command (CENTCOM) told reporters on Sunday that Riyadh is still asking for US military assistance in deterring Iran. Washington backed out of supporting the Saudi-led war in Yemen earlier this year, but the Biden administration has committed to providing for Saudi Arabia's defense, including increasing the efficiency of its air defenses in shooting down Houthi missiles.

US Marine Corps Gen. Kenneth F. McKenzie Jr. told members of the press that the Saudis “want reassurance that they're going to be helped if they're attacked by Iran, and they want help against the continuing attacks” by Ansarallah, the Yemeni Shiite movement also known as the Houthis.

"I believe our posture in the theater has prevented a state on state attack from Iran," McKenzie said. It’s not clear how he determined that, since while the Saudis and Iranians have long been at odds over leadership of the Middle East, there have also reportedly been several attempts at burying the hatchet since the two nations cut formal relations in 2016.

“The Middle East writ broadly is an area of intense competition between the great powers. And I think that as we adjust our posture in the region, Russia and China will be looking very closely to see if a vacuum opens that they can exploit,” McKenzie told reporters. “I think they see the United States shifting posture to look at other parts of the world and they sense there may be an opportunity there.”

As the US shifts its strategic focus toward “great power confrontation” with Russia and China, US commanders in regions that once enjoyed greater focus, such as the Middle East and Africa, are raising concerns about the future of their own missions if their manpower is lost to Asian or European bases.

However, McKenzie said that even if the US troop presence in Saudi Arabia is numerically smaller, "far more important is sort of the broad spectrum of capabilities that we give them.” He pointed specifically to the Saudi-led war in Yemen as something “we want to help them with,” noting that US and Saudi air defense systems have been linked.

A serious material link between the Houthis and Iranians remains unproven, and evidence used to suggest the Houthis are using Iranian-supplied weapons is circumstantial. Regardless, the Houthis are at war with the Saudis not because of anything Iran has done, but because Saudi-backed Yemeni President Abdrabbuh Mansour Hadi fled to Riyadh begging for help after the Houthis, at the head of a mass movement, forced Hadi from power in early 2015.

The Saudis quickly mounted a multinational assault on the Houthis, bringing a number of Sunni nations, including Morocco, Sudan, and the United Arab Emirates, into a coalition that has waged a devastating air war and funneled Western-made arms to anti-Houthi forces inside Yemen. The US also joined this fight, providing logistical services and dispatching Green Berets to destroy Houthi missile sites just across the border from Saudi Arabia.

However, the war has since shifted, and as the Houthis have slowly expanded their control in Yemen and more and more members of the Saudi coalition exit the war, the Houthis have mounted increasingly daring strikes into Saudi Arabia itself, launching cruise missiles, ballistic missiles, and suicide drones against air bases and petrolem infrastructure, the backbone of the Saudi economy.

As the catastrophic human cost of the war in Yemen became increasingly apparent, with much of the country under threat of starvation and the Saudi-led bombing campaign and blockade bearing a heavy responsibility for the destruction of civilian infrastructure such as hospitals and schools, public opinion demanded the US end its support for the Saudi war in Yemen. However, while federal lawmakers attempted to take action as early as 2019, the Trump administration blocked their efforts and continued to support the Saudi monarchy.

Earlier this year, after US President Joe Biden took office, he moved to end US support for Saudi offensive operations, but said the US would continue to support Saudi Arabia’s defensive abilities and that he would not categorically refuse to sell offensive weapons to the Saudis, either.