Ilya Tsukanov
All materialsWrite to the author
The 9/11 attacks in New York, Washington, DC and Pennsylvania prompted the US to declare a ‘War on Terror’ and to invade Afghanistan and Iraq. America’s Saudi allies faced no consequences, even though Osama bin Laden and 15 of the 19 hijackers were Saudi nationals, and Saudi-sponsored charities were deemed “likely” to have provided terror funding.

Twenty-two Senate and House lawmakers from the states of New York and New Jersey, including senior Democrats Chuck Schumer and Kirsten Gillibrand and NY Republican Representative Nicole Malliotakis, have sent a letter to US Attorney General Merrick Garland requesting the release of a classified FBI report allegedly documenting the possible extent of Saudi involvement in the 11 September 2001 terror attacks.

The letter recalls the Trump administration’s repeated invocation of the ‘state secrets privilege’ (which the Obama and Bush administrations also used) to prevent the release of documents for use by 9/11 families for litigation with Saudi authorities, who have repeatedly and vocally denied any role in the acts of terror.

“We understand that the families in this litigation seek documents that they believe would show Saudi Arabia’s complicity in the attacks, as well as information related to Operation Encore, an investigation conducted by the FBI between 2007 and 2016. Like other victims, these families deserve to go to court with all the evidence available to them under a fair application of the law,” the letter states.

“As you know, one of our principle concerns with the ‘state secrets’ doctrine is that it has no basis in statute; it is entirely judge-made, and it has frequently been asserted to cover up government misconduct,” the appeal adds, urging Garland to exercise “extreme care with regard to any assertion of maintenance of this privilege.”

The letter asks the attorney general to “review past decisions to invoke the state secrets privilege in this case, in light of all the relevant facts and equities of the matter”.

The appeal follows a separate letter sent by Malliotakis to Garland on 21 April, signed by four fellow GOP lawmakers, demanding the immediate release of the FBI report and suggesting that the families of the dead and the injured had been robbed of justice.

Before that, in March, over 2,100 family members of victims signed a collective appeal to Garland and President Joe Biden, accusing the FBI and the Department of Justice of “continually” obstructing and impeding their lawsuit. The White House has yet to respond to the appeal.

Speaking to the New York Post, Brett Eagleson, son of a retail worker who was killed in the South Tower on 9/11, and a spokesman for families suing Riyadh, praised the new appeal by lawmakers, saying that it was “long past time” that Americans find out “the extent of Saudi Arabia’s role” in the attacks.

In 2012, the FBI issued a bombshell memo under its ‘Operation Encore’ investigation which, despite being heavily redacted, identified three senior Saudi government officials whom it accused of providing the 9/11 attackers with financial assistance, flight lessons, driver’s licenses and living arrangements and being aware of their plans to “commit an act of terrorism” on US soil. One official, identified as Mussaed Ahmed al-Jarrah, was said to be working in the Saudi Embassy in Washington at the time. 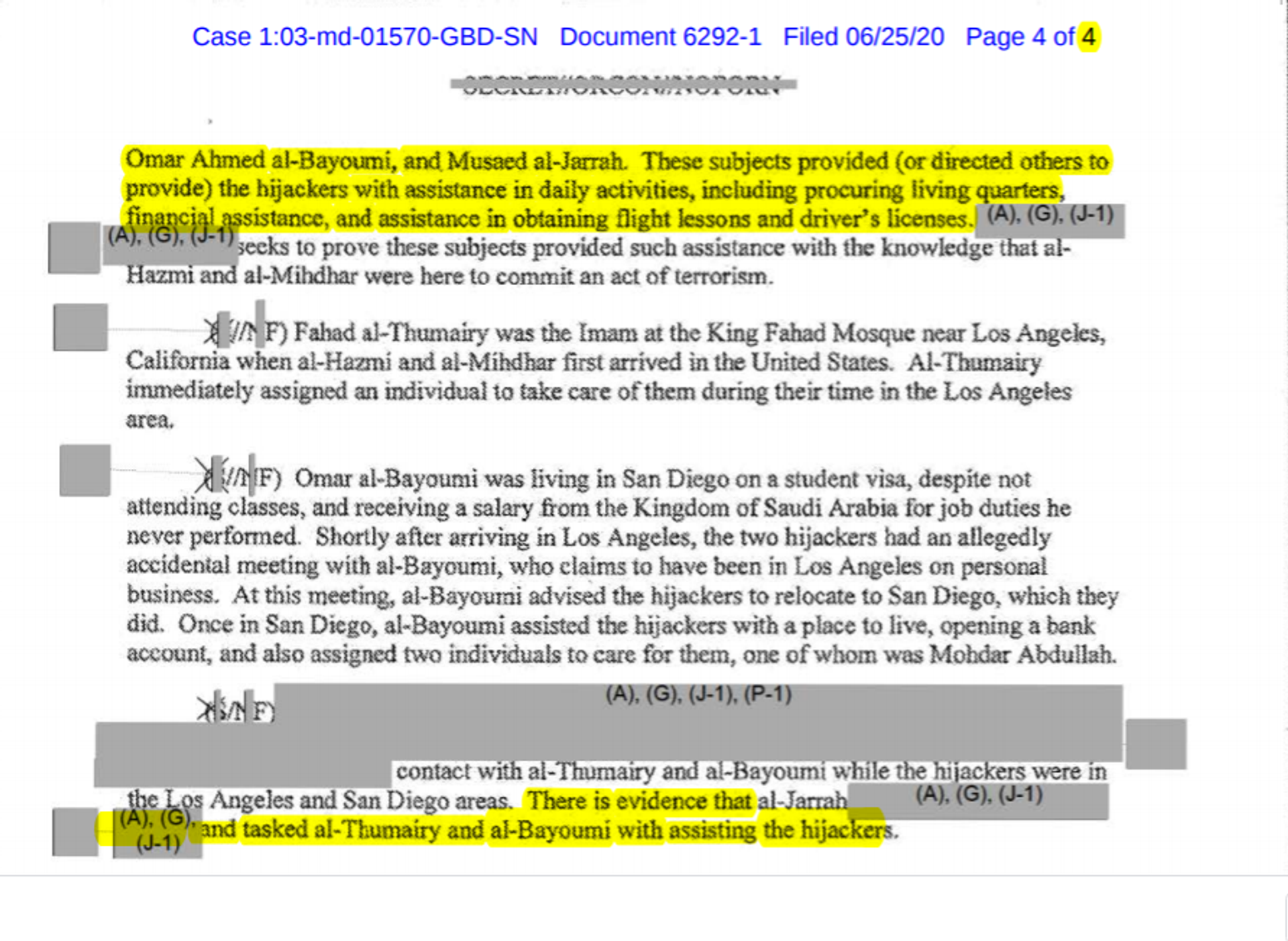 The families of the victims of 9/11, and the thousands of police, firemen and cleanup workers who have become sick with cancers and other illnesses in the cleanup operations at Ground Zero, are suing Saudi Arabia in a New York federal court, and have requested access to the FBI’s final 16-page report on Operation Encore.

Eagleson said President Trump had personally promised to “help” the families in their lawsuit at a ceremony on the 18th anniversary of the 9/11 attacks in Washington, DC in 2019, but that his attorney general, Bill Barr, refused to budge on the “state secrets privilege” justification for blocking the documents’ release after that.

US Refuses Release of 9/11 Documents, Claims Reason for Secrecy is Secret
Last year, the State Department justified the continued blocking of documents related to 9/11 and Saudi Arabia, with authorities claiming the they would expose ‘state secrets’, and saying that it could not explain what those secrets were, because that, too, was secret. “This information must be protected because its disclosure reasonably could be expected to cause serious damage, and in many cases exceptionally grave damage, to the national security of the United States,” then-Director of National Intelligence Richard Grenell said at the time.

The United States has refused to openly investigate Saudi Arabia’s alleged role in 9/11 for nearly 20 years, but has used the terror attacks to justify invasions of, or the pilfering of funds from, other nations. The attacks prompted the US to invade Afghanistan in late 2001, on the justification that the Taliban were refusing to hand over al-Qaeda leader and presumed 9/11 mastermind Osama bin Laden to US custody. The US later found and killed bin Laden, who was discovered living in a compound of an affluent neighbourhood in Abbottabad, Pakistan, in 2011. The US and its NATO allies have remained deployed in Afghanistan for nearly two decades now, with the Biden administration announcing last month that a complete withdrawal would be completed by the upcoming 20th anniversary of 9/11.

In 2003, the Bush administration actively claimed that Iraq was cooperating with al-Qaeda, even though Saddam Hussein’s government was engaged in an active conflict with the Islamist terror group. In 2007, former CIA Director George Tenet admitted to 60 Minutes that the US “could never verify that there was any Iraqi authority, direction and control, complicity with al-Qaeda for 9/11 or any operational act against America, period.”

* Al-Qaeda is a terrorist group outlawed in Russia and many other countries.