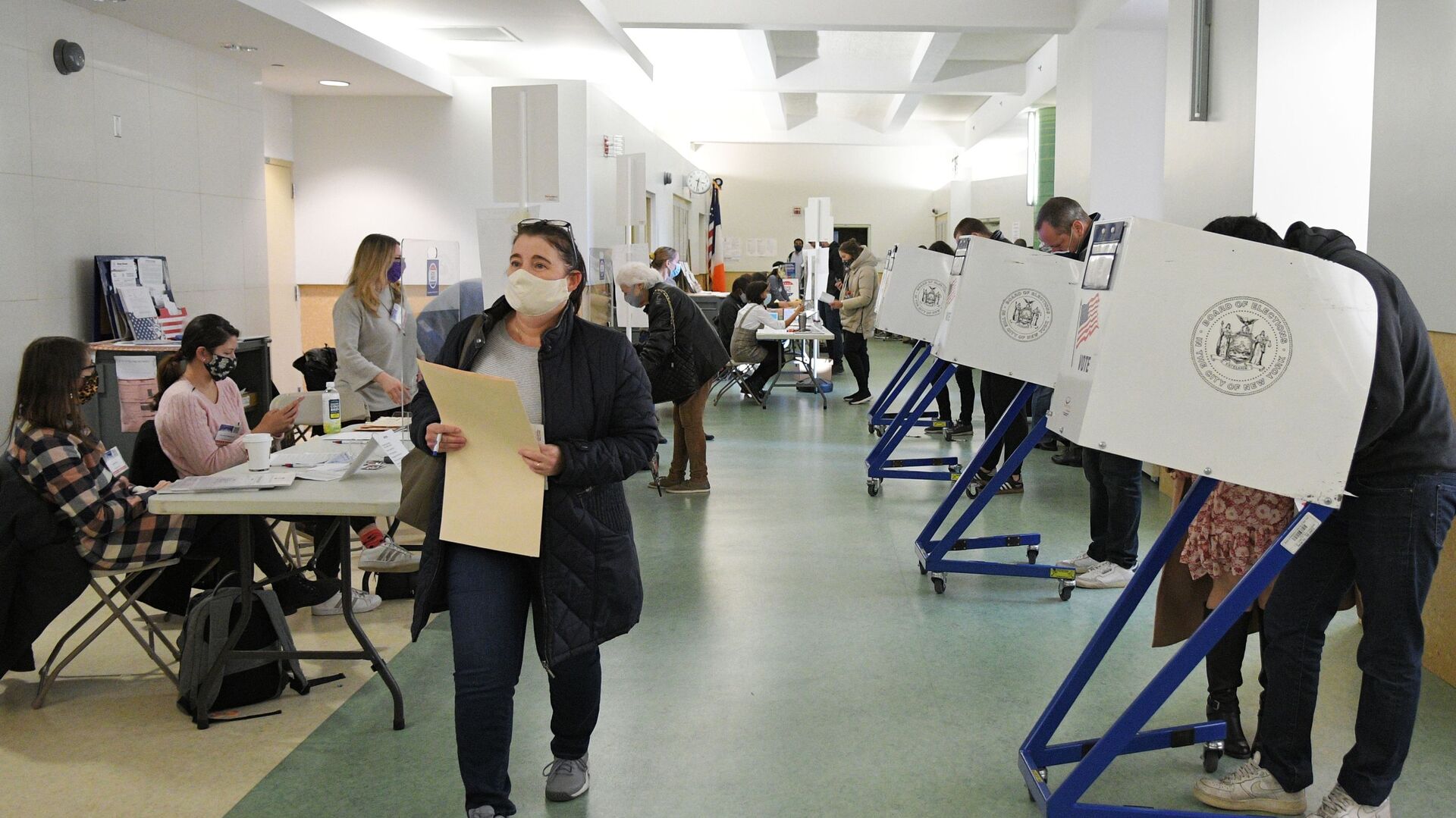 © Sputnik / Dmitry Parshin
/
Go to the mediabank
Subscribe
International
India
Africa
Ekaterina Blinova
All materialsWrite to the author
After the Maricopa County Superior Court ruled that the Arizona GOP Senate's audit of the 2020 election results may continue, much to the displeasure of the state's Dems, the US Justice Department stepped in, raising concerns about ballot security and possible voter intimidation in the course of the procedure.

On 5 May, Pamela S. Karlan, the head of the DOJ Civil Rights Division, sent a letter to Republican Senate President Karen Fann arguing that the use of an outside contractor to audit the ballots may be in violation of federal law and amount to illegal voter intimidation.

"Past experience with similar investigative efforts around the country has raised concerns that they can be directed at minority voters, which potentially can implicate the anti-intimidation prohibitions of the Voting Rights Act," the letter reads.

The DOJ intervened six day after voting rights groups – the Brennan Center for Justice, the Leadership Conference and Protect Democracy – urged the federal authorities to lend an ear to their concerns that the outside auditors could be engaged in "imminent violations of federal voting and election laws".

Wait... Biden just authorized the Department of Justice to interfere on the Arizona election audit??

Democrats are positively shameless about what they did during the 2020 election.

​Arizona Republicans have opposed the DOJ intervention in the audit of Maricopa ballots: "Democrats want the US Department of Justice to interfere in audit, send federal monitors," the state's GOP tweeted on Thursday. "Democrat lies may lead to DOJ legal challenge of AZ Court-approved right of AZ Senate to continue audit."

The US DOJ sends letter to the #ArizonaAudit demanding to know what steps its contractors are taking to secure ballots and elections systems. Also concerned about possible voter intimidation. Cites our reporting, as well as our competitors/colleagues.#azfamily pic.twitter.com/IYZthO8aJX

​"Democrat Secretary of State Katie Hobbs who does not support election audits or transparency now wants the Federal Government to get involved in the Arizona Senate forensic audit," Maricopa Arizona Audit Twitter account says. "Arizona has the authority to conduct this audit without interference from the Feds!"

​In a separate move, Arizona Secretary of State Katie Hobbs sent a six-page letter to the Senate’s liaison and former Secretary of State Ken Bennett on Wednesday insisting that the procedures governing the audit do not ensure accuracy, security, and transparency.

Dul did not rule out that the policies would "allow counters to accept a large enough error rate to perhaps show Trump won the state," AP notes, adding that it would not change the outcome of the election.

The state's GOP rejects the accusations levelled by their political opponents. Speaking on John Solomon Reports' podcast on 6 May, Kelli Ward, chairwoman of the Arizona Republican Party, bemoaned the left's attempts to "discredit" and "belittle" the auditors hired by the Senate. She emphasised that the review is conducted by "world-class experts."

Hilarious to watch Democrats, not to mention their media enablers--who scornfully dismissed election security concerns in 2020--now pompously declaim about "chain of custody" issues in the forensic audit of Arizona. https://t.co/llVlHlWFt0

Meanwhile, officials in Maricopa County have also thrown sand in the gears of the GOP audit by withholding a portion of subpoenaed materials over the alleged security risks.

The Senate subpoena specifically requested access or control "of all routers and tabulators" which were "used in connection with the administration of the 2020 election". Still, according to Maricopa County officials, the routers in question provide support to dozens of the county's departments. They refused to hand them over to the Senate's auditors citing "a significant security risk to law enforcement data utilised by the Maricopa County Sheriff’s Office as well as numerous federal agencies."

Just the News draws attention to the fact that the Maricopa officials' explanations contradict the February ruling of Maricopa County Superior Court Judge Timothy Thomason, who specified that Maricopa's claims of confidentiality concerns do not preempt the requirements of the subpoena.

"The Subpoenas are, in essence, the equivalent of a Court order, requiring production of certain information," the court ruling said. "The County cannot avoid a subpoena based on statutes that require that the material being subpoenaed be kept confidential."

These are the servers for Maricopa Co elections. The external drives that were loaded w/ nightly early vote totals are circled. Scott Jarrett said they were taken to an offsite “undisclosed location” nightly “for safety” by an employee or a Dominion contractor working for MC. 🤔 pic.twitter.com/cfufiCJD09

The US mainstream media is adding gasoline to the flames, claiming that the ongoing audit in Arizona is fuelling "the Big Lie" across the country, referring to the 2020 election fraud suspicions.

Vanity Fair has branded the Maricopa recount procedure as "disgraceful" and "outrageously partisan"; MSNBC has called the audit "alarming", while Vox dubbed it "bizarre" and "haphazard". The media outlets are particularly concerned about former President Donald Trump's endorsement of the Arizona GOP effort.

Although Joe Biden outperformed Trump by nearly 7 million popular votes, and 74 votes in the Electoral College, his victory came from a handful of swing states which he won with a narrow margin. According to NPR, "just 44,000 votes in Georgia, Arizona and Wisconsin separated Biden and Trump from a tie in the Electoral College." Trump and his supporters suggest that the alleged election irregularities in the swing states tipped the balance in Biden's favour. They hope that the Maricopa audit may shed light on this.

​Commenting on the mainstream media's accusations, Donald Trump criticised Big Media, Big Tech and  theDemocrats for "doing everything they can to perpetuate the term 'The Big Lie' when speaking of 2020 presidential election fraud."

"The 2020 election, which didn’t even have legislative approvals from many States (which is required under the US Constitution), and was also otherwise corrupt, was indeed The Big Lie," the former president insisted.