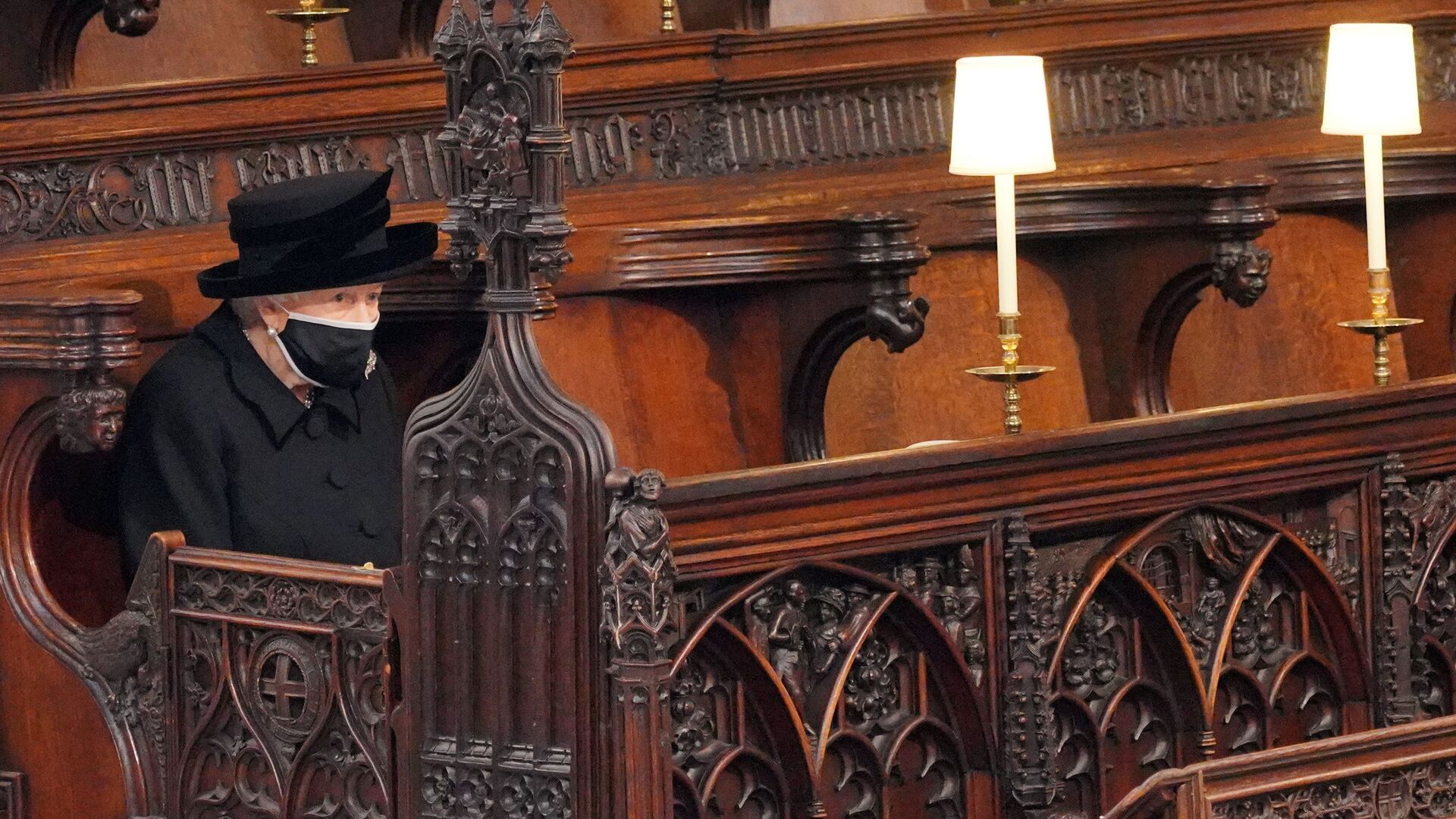 © REUTERS / Victoria Jones
Subscribe
Max Gorbachev
All materialsWrite to the author
The Duke of Edinburgh died on 9 April at the age of 99, two months before his 100th birthday. Upon Her Majesty's wishes, the Royal Family will observe two weeks of mourning. A spokesman for Buckingham Palace said that despite the period of sadness members of the family, including the Queen, will continue performing royal duties.

Twenty-two members of the royal "bubble" will comfort Queen Elizabeth II while she mourns Prince Philip, The Telegraph reported citing its sources. The so-called bubbles are groups of people with whom one can maintain close contact and not adhere to coronavirus safety rules such as social distancing.

When the pandemic began last year, Master of the Royal Household Vice Admiral Sir Tony Johnstone-Burt called the group "HMS Bubble", which the Queen and the late Prince Philip liked very much, because during the Second World War the Duke of Edinburgh, who served in the Royal Navy, was nicknamed "Big Bubble".

Some of the personal assistants and aides from "HMS Bubble" have been with Her Majesty since the end of the 20th century, The Telegraph writes. 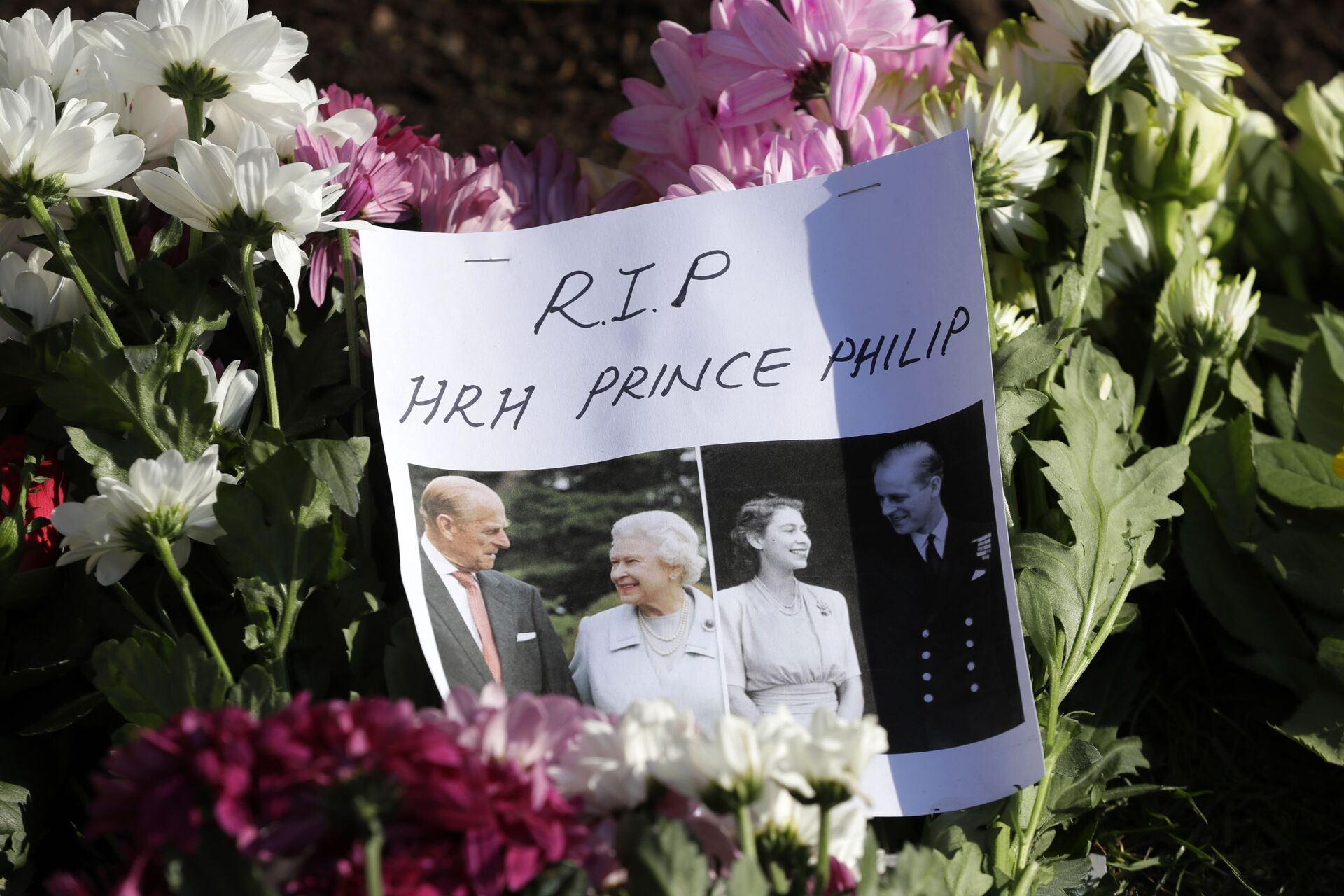 A message is left amoungst flowers outside Windsor Castle in Windsor, England Sunday, April 11, 2021. Britain's Prince Philip, the irascible and tough-minded husband of Queen Elizabeth II who spent more than seven decades supporting his wife in a role that mostly defined his life, died on Friday.
© AP Photo / Kirsty Wigglesworth

According to the newspaper, the closest one is Angela Kelly, a senior dresser, whom the Queen trusts so much that she allowed her to write two books about royal life with a third one in process.

Although the two have very different backgrounds, the monarch always chats with Angela Kelly, while the assistant knows the Queen inside out, The Telegraph writes, adding that this is not an exaggeration as the aide breaks in the royal's new shoes before the Queen wears them.

The Queen's Page of the Backstairs, Paul Whybrew is said to provide a calming presence in the Palace. According to The Telegraph, Paul Whybrew is the aide who accompanies the Queen when she watches TV.

Nicknamed "Tall Paul" he appeared alongside the Queen in the sketch made for the 2012 London Olympics, where Her Majesty was accompanied to the Games by James Bond played by Daniel Craig.

Another notable mention is Brigadier Archie Miller-Bakewell, a personal secretary of Prince Philip, who worked for him for more than a decade, helping the Duke with his diary and standing in for him at royal engagements.

The Queen will be also supported by her ladies-in waiting, also known as the Women of the Bedchamber. Lady Susan Hussey, 81, accompanied the monarch to the funeral. She is also Prince William's godmother. Another close aide is the Honorable Dame Mary Anne Morrison, 83, who has been with the Queen since 1960.

The improving epidemiological situation in the United Kingdom has since resulted in the relaxing of some coronavirus restrictions, which will allow the Queen's children – Prince Charles, Princess Anne, Prince Andrew, and Prince Edward – to visit her. However, the fact that they are not part of "HMS Bubble" means they have to maintain social distance.

As mentioned earlier, during the two-week period of mourning the Queen will not stop performing royal duties and engagements. This week she has already held a telephone conversation with Canadian Prime Minister Justin Trudeau and spoken with the Lord Chamberlain of the Household, Lord Parker, who once headed Britain's intelligence agency MI5.