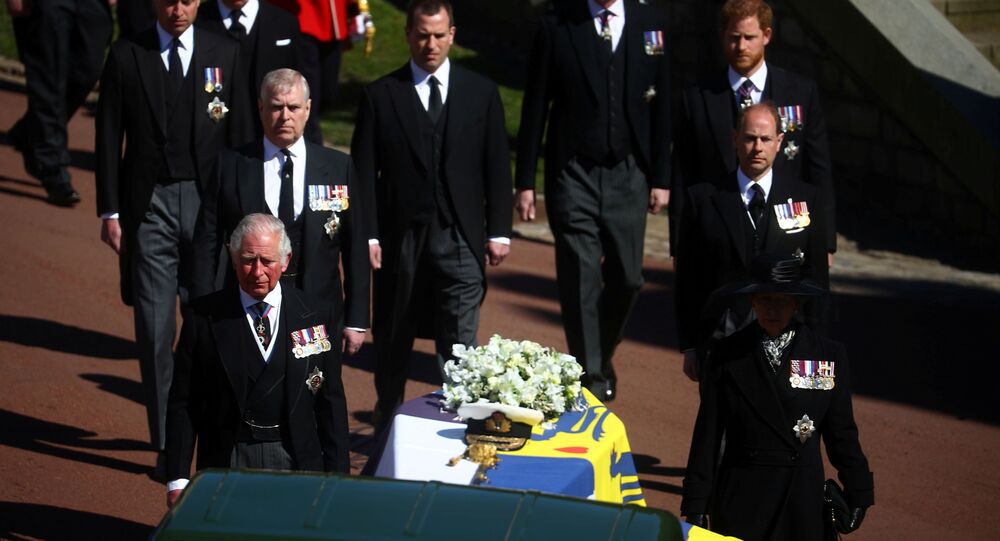 The Duke of Edinburg was laid to rest on Saturday, 17 April, eight days after the 99-year-old husband of Queen Elizabeth II died.

Here are a number of noteworthy details about the ceremony, which saw most of the extended royal family join together in mourning on the grounds of the monarch’s Windsor Castle.

© REUTERS / POOL
Britain's Prince Charles and Camilla, Duchess of Cornwall attend a funeral of Britain's Prince Philip, husband of Queen Elizabeth, who died at the age of 99, at St. George's Chapel, in Windsor, Britain, April 17, 2021. Dominic Lipinski/Pool via REUTERS?

They sat directly opposite the grief-stricken Queen, who mourned alone, bidding farewell to her “strength and stay”.

© REUTERS / POOL
Britain's Queen Elizabeth is seen during the funeral of Britain's Prince Philip, husband of Queen Elizabeth, who died at the age of 99, at St George's Chapel, in Windsor, Britain, April 17, 2021. Yui Mok/Pool via REUTERS TPX IMAGES OF THE DAY

PRINCE HARRY WALKING WITH KATE MIDDLETON AND HIS BROTHER PRINCE WILLIAM AFTER THE FUNERAL!!!!#PrincePhilipfuneral pic.twitter.com/zt6bgKR1sB

The Duchess of Cambridge takes a step back so Prince William and Harry can talk alone 👏🏽❤️#PrincePhilipFuneral pic.twitter.com/bn0viFvR7c